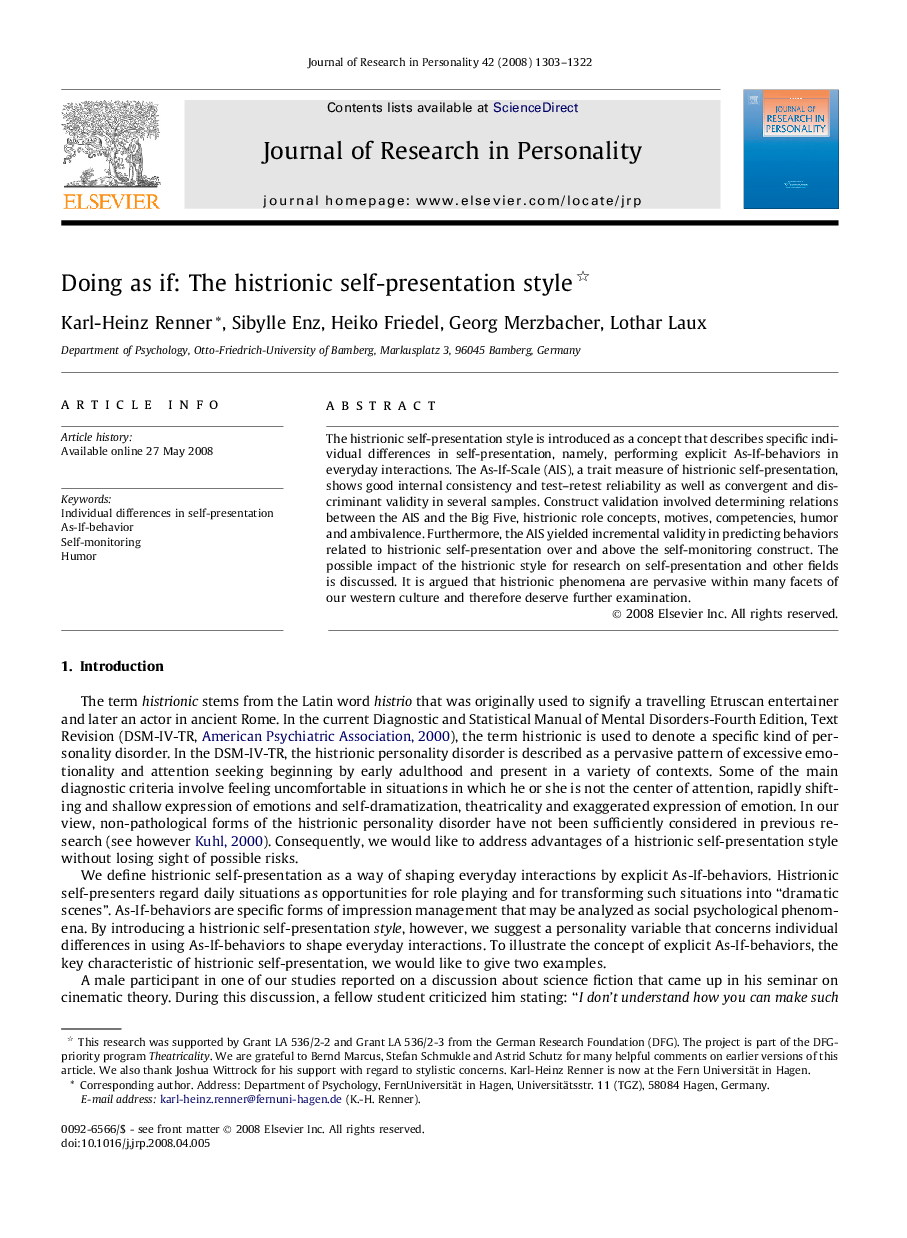 1. Introduction The term histrionic stems from the Latin word histrio that was originally used to signify a travelling Etruscan entertainer and later an actor in ancient Rome. In the current Diagnostic and Statistical Manual of Mental Disorders-Fourth Edition, Text Revision (DSM-IV-TR, American Psychiatric Association, 2000), the term histrionic is used to denote a specific kind of personality disorder. In the DSM-IV-TR, the histrionic personality disorder is described as a pervasive pattern of excessive emotionality and attention seeking beginning by early adulthood and present in a variety of contexts. Some of the main diagnostic criteria involve feeling uncomfortable in situations in which he or she is not the center of attention, rapidly shifting and shallow expression of emotions and self-dramatization, theatricality and exaggerated expression of emotion. In our view, non-pathological forms of the histrionic personality disorder have not been sufficiently considered in previous research (see however Kuhl, 2000). Consequently, we would like to address advantages of a histrionic self-presentation style without losing sight of possible risks. We define histrionic self-presentation as a way of shaping everyday interactions by explicit As-If-behaviors. Histrionic self-presenters regard daily situations as opportunities for role playing and for transforming such situations into “dramatic scenes”. As-If-behaviors are specific forms of impression management that may be analyzed as social psychological phenomena. By introducing a histrionic self-presentation style, however, we suggest a personality variable that concerns individual differences in using As-If-behaviors to shape everyday interactions. To illustrate the concept of explicit As-If-behaviors, the key characteristic of histrionic self-presentation, we would like to give two examples. A male participant in one of our studies reported on a discussion about science fiction that came up in his seminar on cinematic theory. During this discussion, a fellow student criticized him stating: “I don’t understand how you can make such a big deal out of ‘Star Wars’. The light sabers—they are pretty ridiculous. A laser gun would be much more effective.” At this instant, our participant jumped up, pointed at his fellow-student and yelled, “What a fool you are! Don’t you know that the light saber is the Jedi knight’s most noble weapon?” Further reflecting on this incident, our participant stated: “I simply performed this quotation from the Star Wars movie and imitated Obi Wan Kenobi. Of course, this made people laugh—the professor as well. And if you do such a thing right away in the first session of class, you obtain a certain kind of status…” A female participant gave an account of a conflict she encountered within her relationship. Her husband is a manager and due to his heavy workload, he has insufficient time for the family. In order to convey her displeasure with the situation, she chose the following wording: ‘Hey honey. Can you imagine that our next personnel talk is an evaluation in which we will discuss your lack of compliance with the conditions of our contract?’ She went on to describe the reasons for this statement saying: “I said it this way because I didn’t want to react angrily. My husband often told me about situations where he had to tell his coworkers that they were being excessively lazy. So, when I spoke, I simply imitated the way my husband would act in such a situation. He replied on the same level and said: ‘Well, fortunately there is still enough time up till the next personnel talk to improve my performance and once again meet the terms of the agreement.’ We then both laughed and a friendly atmosphere sustained.” In these two examples, the protagonists merely act as if they were another person. The male participant imitated a Star Wars character and paraphrased a scene that actually occurs in one of the Star Wars episodes. The female participant intentionally imitated her husband’s professional role as a manager. In both examples, these role plays are explicit: the interaction partners recognize the As-If-mode of the behaviors and realize that the protagonists are just playing a role like actors on a stage. In the first example, the fellow students and even the professor laughed at the “Star Wars quotation” of the male participant. In the second example, the husband of the female participant even enters into the role play. Histrionic role playing differs from the broader sociological role construct. Our concept of histrionic role playing is narrower than the role theoretical view of man-as-actor that was endorsed by Erving Goffman (1959). At the heart of histrionic self-presentation is the short-term role-playing with its’ explicit performative nature. Such histrionic role plays can sometimes disrupt the sociological role one usually utilizes in everyday life (e.g., the role of a student or wife like in our initial examples). They can also be distinguished from therapeutic or didactic role playing that usually occurs under specific conditions, for example, in a secure therapeutic setting. Furthermore, histrionic role plays are self-induced, whereas therapeutic or didactic role plays are induced by others, e.g., suggested by a counselor during the course of an assertiveness training program. More similar to our concept of histrionic self-presentation is “Make-believe” as described by Goffman (1974, p. 48f) in his book “Frame Analysis”. Make-believe is an… activity that participants treat as an avowed, ostensible imitation or running through of less transformed activity, this being done with the knowledge that nothing practical will come of the doing (…) A ‘pastime’ or ‘entertainment’ is provided. Typically, participants might be expected to be free of pressing needs before so indulging themselves and to abandon these enjoyments unceremoniously should basic needs or urges become acute… (Goffman, 1974, p. 48). However, as will be shown in the section on motives, histrionic self-presentation is not simply a “pastime” or an activity done solely for the reason of “entertainment”.

12. Conclusions In a recent review chapter, Barry Schlenker (2003) stated an explosion of research on self-presentation. Contrary to 1982, when Roy Baumeister compared self-presentation with a “rude bastard” that is only reluctantly accepted within the scientific community, the construct of self-presentation now seems to be alive and well. Schlenker (2003, p. 492) cites seminal papers on self-presentation from the fields of social, developmental and sport psychology as well as works from the areas of organizational behavior and management, marketing, political science and sociology. Personality psychological research on self-presentation is missing in this listing and we believe that this is not an unintended shortfall of Schlenker. Although Mark Snyder’s self-monitoring construct has stimulated a substantial amount of research during the decades between 1970 and 1990 (see Snyder, 1987 for a review), the investigation of individual differences in self-presentation has declined since the nineties. Current empirical papers focusing on individual differences in self-presentation are rare (e.g., Lee, Quigley, Nesler, Corbett & Tedeschi, 1999), and new conceptual developments are even more rare (see Hewitt et al., 2003 for an exception). We have introduced the histrionic self-presentation style as a novel concept that may revive research on individual differences in self-presentation. The histrionic style, that is, the use of explicit As-If-behaviors in everyday interactions, describes a phenomenon that has been largely ignored in psychological research on self-presentation. The histrionic self-presentation style was distinguished conceptually as well as empirically from the self-monitoring concept and therefore represents a unique construct with its own scope. The histrionic style may not only revive research in the area of self-presentation but may also stimulate other fields. For example, in clinical psychology, empirical evidence has accrued supporting a dimensional over a categorical conceptualization of personality disorders (Clark, 2007). The Five-Factor-Model is widely accepted as an integrative framework for mapping the higher-order structure of adaptive and maladaptive personality. However, Clark (2007) calls for a better understanding of more focal traits in order to map the lower-order structure of personality disorders. The histrionic self-presentation style may serve as such a focal trait for a better understanding of the histrionic personality disorder. Media psychology has recently focused on the functions and processes of entertainment (Bryant & Vorderer, 2006). Since histrionic self-presentation is sometimes carried out to entertain others (tension creation) it could be informative to investigate explicit As-If-behaviors in prominent media figures such as talk show hosts or politicians. Lastly, we argue that histrionic phenomena pervade many areas within western culture and society. Of course, explicit As-If-behaviors are prevalent in the media and in advertisements, but one will also find histrionic self-presentation in the area of personnel management where organizational or corporate theater is now adopted as a tool, e.g., to cope with emotional barriers with regard to upcoming organizational changes (Clark and Mangham, 2004 and Schreyögg and Dabitz, 1999). Similarly, in provocative therapy As-If-behaviors are used in order to overcome dysfunctional cognitive beliefs (Farrelly & Brandsma, 1989). More generally, we hypothesize that histrionic As-If-behaviors will sooner or later occur whenever people meet and intend on establishing a good mood. These histrionic phenomena support the notion that our contemporary culture or society may be interpreted as a society of staging (Willems & Jurga, 1998). The dramaturgical quality of everyday social life is, of course, hardly a new idea. In sociology and psychology, the “drama of everyday life” has become prominent with the work of Erving Goffman (e.g., 1959). Historically speaking, processes of staging and theatricality were especially apparent in the court society of the 18th century (Elias, 1983). However, the performative signature of contemporary western culture was consistently highlighted during the recent years by scholars of different theoretical backgrounds (e.g., Carlson, 1996, Gabler, 1998, Schechner, 2002 and Scheibe, 2000). Our concept of histrionic self-presentation offers a middle level unit of personality that may be used to describe certain kinds of performative phenomena, that is, acting As-If, at the level of the individual person.