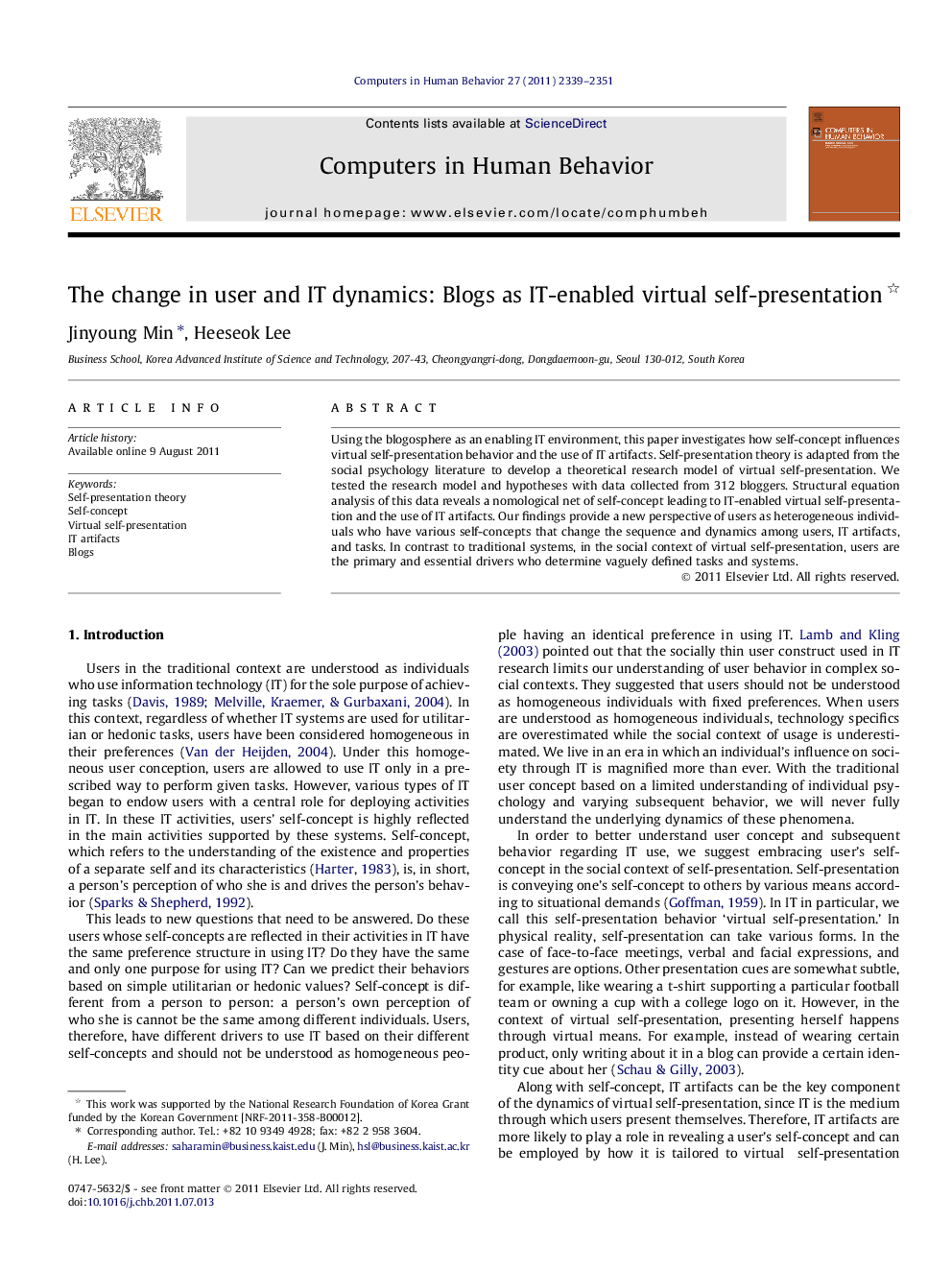 Introduction Users in the traditional context are understood as individuals who use information technology (IT) for the sole purpose of achieving tasks (Davis, 1989 and Melville et al., 2004). In this context, regardless of whether IT systems are used for utilitarian or hedonic tasks, users have been considered homogeneous in their preferences (Van der Heijden, 2004). Under this homogeneous user conception, users are allowed to use IT only in a prescribed way to perform given tasks. However, various types of IT began to endow users with a central role for deploying activities in IT. In these IT activities, users’ self-concept is highly reflected in the main activities supported by these systems. Self-concept, which refers to the understanding of the existence and properties of a separate self and its characteristics (Harter, 1983), is, in short, a person’s perception of who she is and drives the person’s behavior (Sparks & Shepherd, 1992). This leads to new questions that need to be answered. Do these users whose self-concepts are reflected in their activities in IT have the same preference structure in using IT? Do they have the same and only one purpose for using IT? Can we predict their behaviors based on simple utilitarian or hedonic values? Self-concept is different from a person to person: a person’s own perception of who she is cannot be the same among different individuals. Users, therefore, have different drivers to use IT based on their different self-concepts and should not be understood as homogeneous people having an identical preference in using IT. Lamb and Kling (2003) pointed out that the socially thin user construct used in IT research limits our understanding of user behavior in complex social contexts. They suggested that users should not be understood as homogeneous individuals with fixed preferences. When users are understood as homogeneous individuals, technology specifics are overestimated while the social context of usage is underestimated. We live in an era in which an individual’s influence on society through IT is magnified more than ever. With the traditional user concept based on a limited understanding of individual psychology and varying subsequent behavior, we will never fully understand the underlying dynamics of these phenomena. In order to better understand user concept and subsequent behavior regarding IT use, we suggest embracing user’s self-concept in the social context of self-presentation. Self-presentation is conveying one’s self-concept to others by various means according to situational demands (Goffman, 1959). In IT in particular, we call this self-presentation behavior ‘virtual self-presentation.’ In physical reality, self-presentation can take various forms. In the case of face-to-face meetings, verbal and facial expressions, and gestures are options. Other presentation cues are somewhat subtle, for example, like wearing a t-shirt supporting a particular football team or owning a cup with a college logo on it. However, in the context of virtual self-presentation, presenting herself happens through virtual means. For example, instead of wearing certain product, only writing about it in a blog can provide a certain identity cue about her (Schau & Gilly, 2003). Along with self-concept, IT artifacts can be the key component of the dynamics of virtual self-presentation, since IT is the medium through which users present themselves. Therefore, IT artifacts are more likely to play a role in revealing a user’s self-concept and can be employed by how it is tailored to virtual self-presentation (Ma & Agarwal, 2007). This leads us to the critical research question of how the enriched user concept is linked to subsequent user behavior through IT. More specifically our research questions are as follows: (1) How does the user’s self-concept in cyberspace affect the subsequent use of IT artifacts and virtual self-presentation? (2) How does this subsequent use of IT artifacts affect virtual self-presentation? To answer these questions, this paper investigates how self-concept influences IT-enabled behavior by using the blogosphere as the target technology of our study. Blogosphere is designed to endow the user with an ownership (Karger & Quan, 2005), and thus becomes a good representation of the IT which reflects the user’s self. Besides, it provides users a rich space to control how they present themselves through blog postings. Self-presentation theory (Baumeister, 1982, Goffman, 1959 and Leary and Kowalski, 1990) serves as our theoretical basis. Since each blogger’s world is built upon information in the form of blog postings which tend to show who they are, what they think, what they like, what they have and so on, all these blog postings can be considered as the virtual form of self-presentation. The rest of this paper is organized as follows. We first provide the background for our research, and then develop the hypotheses and research model. Empirical findings and discussion follow. We conclude the paper with theoretical and practical implications.

. Conclusion As information technology moves from task-oriented system to a technology that assists people in everyday life, it is important that we move from the homogeneous user concept that has been prevalent in the past to the heterogeneous user concept. Taking blog as a target technology, our findings show that information technology embraces self-concept which is different from one another in its main activities and also that the use of IT artifacts are affected by user’s self-concept. This provides a new perspective to understand the dynamics between user and IT, placing significant weight on users. The findings of our descriptive study provide a glimpse of how people’s self-concepts are presented in the blogosphere and how IT artifacts are incorporated with this self-presentation. We believe that the findings contribute to how the interaction between user and information technology should be viewed and provide an understanding of how particular blog postings are generated.