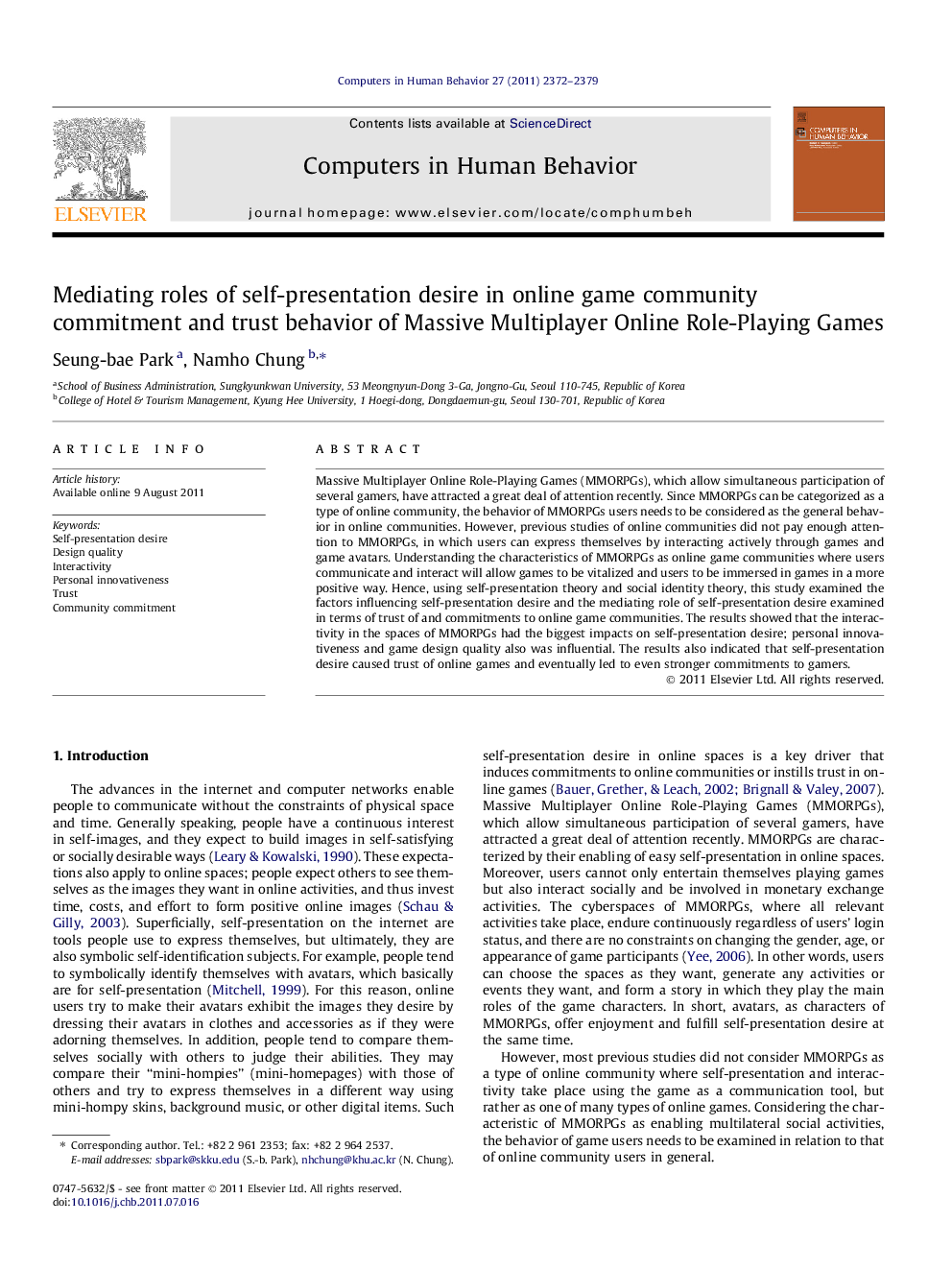 Introduction The advances in the internet and computer networks enable people to communicate without the constraints of physical space and time. Generally speaking, people have a continuous interest in self-images, and they expect to build images in self-satisfying or socially desirable ways (Leary & Kowalski, 1990). These expectations also apply to online spaces; people expect others to see themselves as the images they want in online activities, and thus invest time, costs, and effort to form positive online images (Schau & Gilly, 2003). Superficially, self-presentation on the internet are tools people use to express themselves, but ultimately, they are also symbolic self-identification subjects. For example, people tend to symbolically identify themselves with avatars, which basically are for self-presentation (Mitchell, 1999). For this reason, online users try to make their avatars exhibit the images they desire by dressing their avatars in clothes and accessories as if they were adorning themselves. In addition, people tend to compare themselves socially with others to judge their abilities. They may compare their “mini-hompies” (mini-homepages) with those of others and try to express themselves in a different way using mini-hompy skins, background music, or other digital items. Such self-presentation desire in online spaces is a key driver that induces commitments to online communities or instills trust in online games (Bauer et al., 2002 and Brignall and Valey, 2007). Massive Multiplayer Online Role-Playing Games (MMORPGs), which allow simultaneous participation of several gamers, have attracted a great deal of attention recently. MMORPGs are characterized by their enabling of easy self-presentation in online spaces. Moreover, users cannot only entertain themselves playing games but also interact socially and be involved in monetary exchange activities. The cyberspaces of MMORPGs, where all relevant activities take place, endure continuously regardless of users’ login status, and there are no constraints on changing the gender, age, or appearance of game participants (Yee, 2006). In other words, users can choose the spaces as they want, generate any activities or events they want, and form a story in which they play the main roles of the game characters. In short, avatars, as characters of MMORPGs, offer enjoyment and fulfill self-presentation desire at the same time. However, most previous studies did not consider MMORPGs as a type of online community where self-presentation and interactivity take place using the game as a communication tool, but rather as one of many types of online games. Considering the characteristic of MMORPGs as enabling multilateral social activities, the behavior of game users needs to be examined in relation to that of online community users in general. People are willing to be involved in MMORPGs because they believe the games offer common values to individuals, “guilds,” and “clans.” Playing games provides their players with many benefits—fun, which is a direct reward—and self-contentment and fame, which are a reward for self-presentation, and other benefits such as sharing information about the games or participating in relevant game communities (Hall & Graham, 2004). With respect to these benefits, the most important component of MMORGP is a “guild,” where users generate social values by interacting with others (Kang, Ko, & Ko, 2009). Users will be more actively involved in expressing themselves when MMORPGs are designed to display the above benefits and to allow smoother interactivity as if users were not innovative enough already (Dominick, 1999 and Schau and Gilly, 2003). Those who express themselves actively in MMORPGs are likely to trust online games and be immersed in online game communities such as guilds. To this end, this study suggests the following objectives based on self-presentation theory (Leary, 1995 and Schlenker, 1975) and social identity theory (Ashforth and Mael, 1989 and Tajfel and Turner, 1979). First, factors influencing self-presentation desire will be examined. Second, the mediating role of self-presentation desire will be examined in terms of trust of and commitments to online game communities. In addition, theoretical interpretations of the results and practical implications of MMORPGs providers will be suggested. The rest of the paper is organized as follows: Section 2 presents the theoretical background. Section 3 describes the research model and hypotheses. Section 4 presents the research methodology, and Section 5 describes the analysis and findings of our research. Section 6 shows the discussion and concludes with limitations and suggestions for further research.

Conclusions This study aimed to build a study model to explain the behavior of users in online game community spaces such as MMORPGs and verify it empirically. Like previous studies, this study proved that users of spaces like MMORPGs had high self-presentation desire, and made commitments to the spaces through this desire. In addition, the results showed that high game design quality and spaces enabling active interactivity were essential to increase the self-presentation desire of users. Moreover, people with higher personal innovativeness were proved to be more competent in self-presentation. The study results indicate that MMORPGs are not simply games, but are online communities where people express themselves and communicate with others. Therefore, it is very important to design and plan games that allow users to interact more actively with others, which eventually will vitalize MMORPGs. Recently, prevalent social games such as Tweeter and Facebook have received attention. Crucial for such social games is the promotion of the self-presentation of users. Aside from the implications mentioned previously regarding MMORPGs and social games, this study has a few limitations and suggestions for future studies. First, two online game websites and one online game community were used for the data collection, but most of the respondents were college students in their twenties, which disturbed the generalization of the results to all gamers. Therefore, some additional efforts need to be made for generalizing future study results. Second, future studies need to consider parameters and moderating variables that are not examined in this study. The unique sensibility of online communities is composed of membership, a sense of sharing, emotional association, desire fulfillment, and flow experience (Armstrong and Hagel, 1996 and Muniz and O’guinn, 2001). In this respect, the moderating variables affecting social identification such as need for affiliation and group standards are thought to serve as parameters or moderating influences in the relation between self-presentation and commitments to online communities. Third, additional studies on the characteristics of MMORPGs are required. Members of online communities who have a great deal of knowledge of MMORPGs are expected to serve as core opinion leaders in the communities. Interactivity between such opinion leaders and community members may directly influence participation in and commitments to online communities. In addition, the role of online communities is more crucial for the MMORPGs that require complex skills and strategies than those that can be played simply for fun. Therefore, studies that examine guilds and clans of MMORPGs considering the characteristics of MMORPGs communities are required.