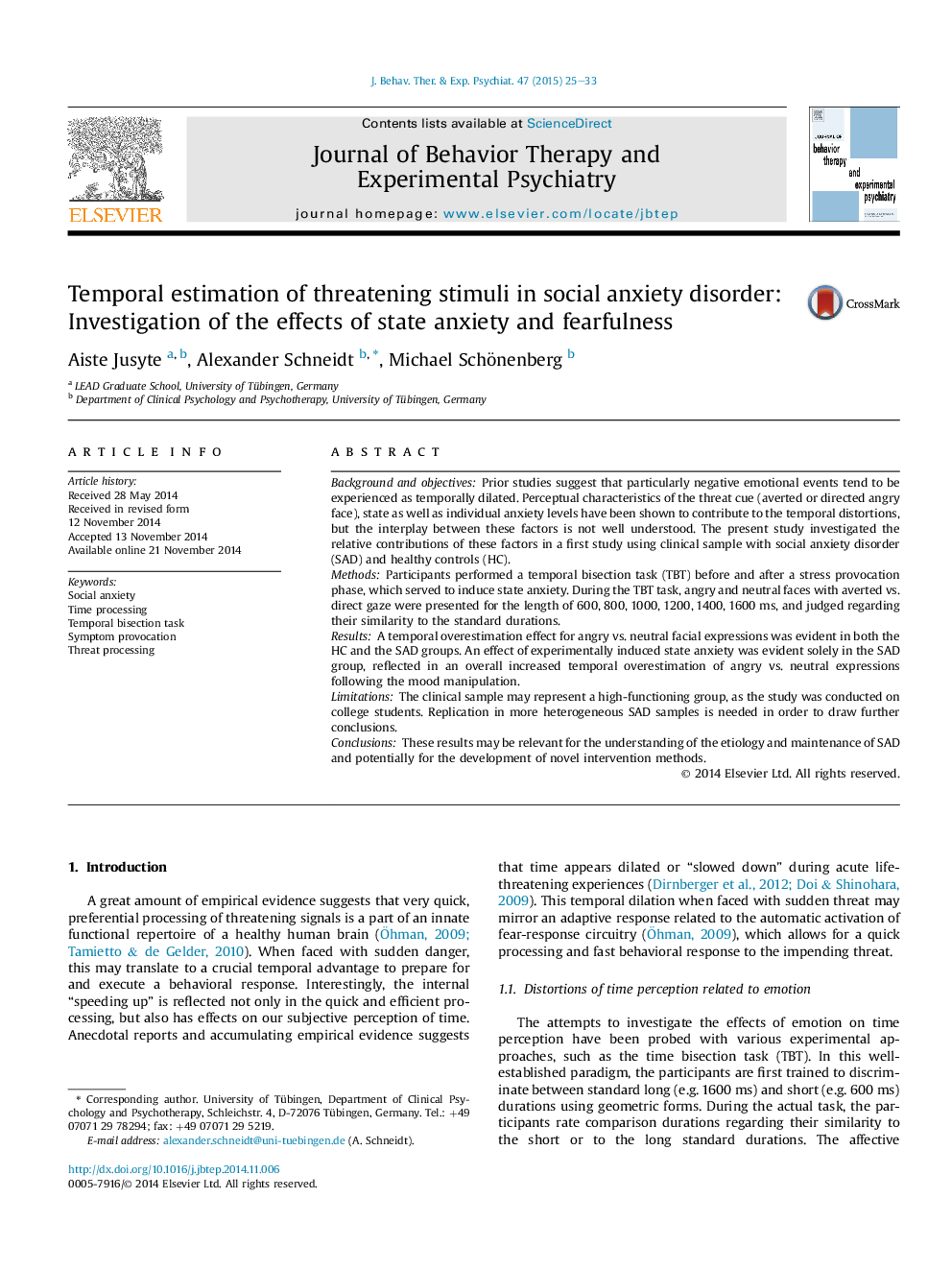 Abstract Background and objectives Prior studies suggest that particularly negative emotional events tend to be experienced as temporally dilated. Perceptual characteristics of the threat cue (averted or directed angry face), state as well as individual anxiety levels have been shown to contribute to the temporal distortions, but the interplay between these factors is not well understood. The present study investigated the relative contributions of these factors in a first study using clinical sample with social anxiety disorder (SAD) and healthy controls (HC). Methods Participants performed a temporal bisection task (TBT) before and after a stress provocation phase, which served to induce state anxiety. During the TBT task, angry and neutral faces with averted vs. direct gaze were presented for the length of 600, 800, 1000, 1200, 1400, 1600 ms, and judged regarding their similarity to the standard durations. Results A temporal overestimation effect for angry vs. neutral facial expressions was evident in both the HC and the SAD groups. An effect of experimentally induced state anxiety was evident solely in the SAD group, reflected in an overall increased temporal overestimation of angry vs. neutral expressions following the mood manipulation. Limitations The clinical sample may represent a high-functioning group, as the study was conducted on college students. Replication in more heterogeneous SAD samples is needed in order to draw further conclusions. Conclusions These results may be relevant for the understanding of the etiology and maintenance of SAD and potentially for the development of novel intervention methods.

Conclusions In summary, the results of the present study indicate that the temporal processing of aversive events is not substantially distorted in SAD. However, the relative temporal overestimation of aversive events prior to vs. following the experimental state anxiety induction was evident in the SAD group only. It is possible that a similar shift may also occur in real-world contexts, particularly in situations characterized by subjective stress, exacerbating the aversiveness of the situation and possibly contributing to the emergence of dysfunctional cognitions. As this is the first investigation addressing time cognition in a clinical population of SAD, future studies are needed in order to investigate whether the alteration of temporal processing is indeed causal to anxious cognition, or may be modulated by comorbid symptoms such as depression. Furthermore, it remains unclear whether these alterations in temporal processing represent a latent cognitive risk factor vs. may be addressed through intervention strategies aimed at the reduction of the temporal distortions themselves or to enhancement of more general emotion-regulation strategies (Buetti and Lleras, 2012, Lake and LaBar, 2011 and Mella et al., 2011). For instance, Mella et al. (2011) demonstrated that the temporal dilation of negative events can be manipulated by attention focus: when participants were instructed to pay attention to the time estimation task as opposed to stimulus characteristics, the temporal overestimation was diminished. Similarly, Buetti and Lleras (2012) demonstrated that perceived control of emotional events can impact the temporal overestimation of aversive events. Future research is needed in order to further elucidate the contribution of temporal processing to symptom development and maintenance in SAD, its potential as possible implicit treatment outcome measure as well as the potential extent of changeability through treatment strategies