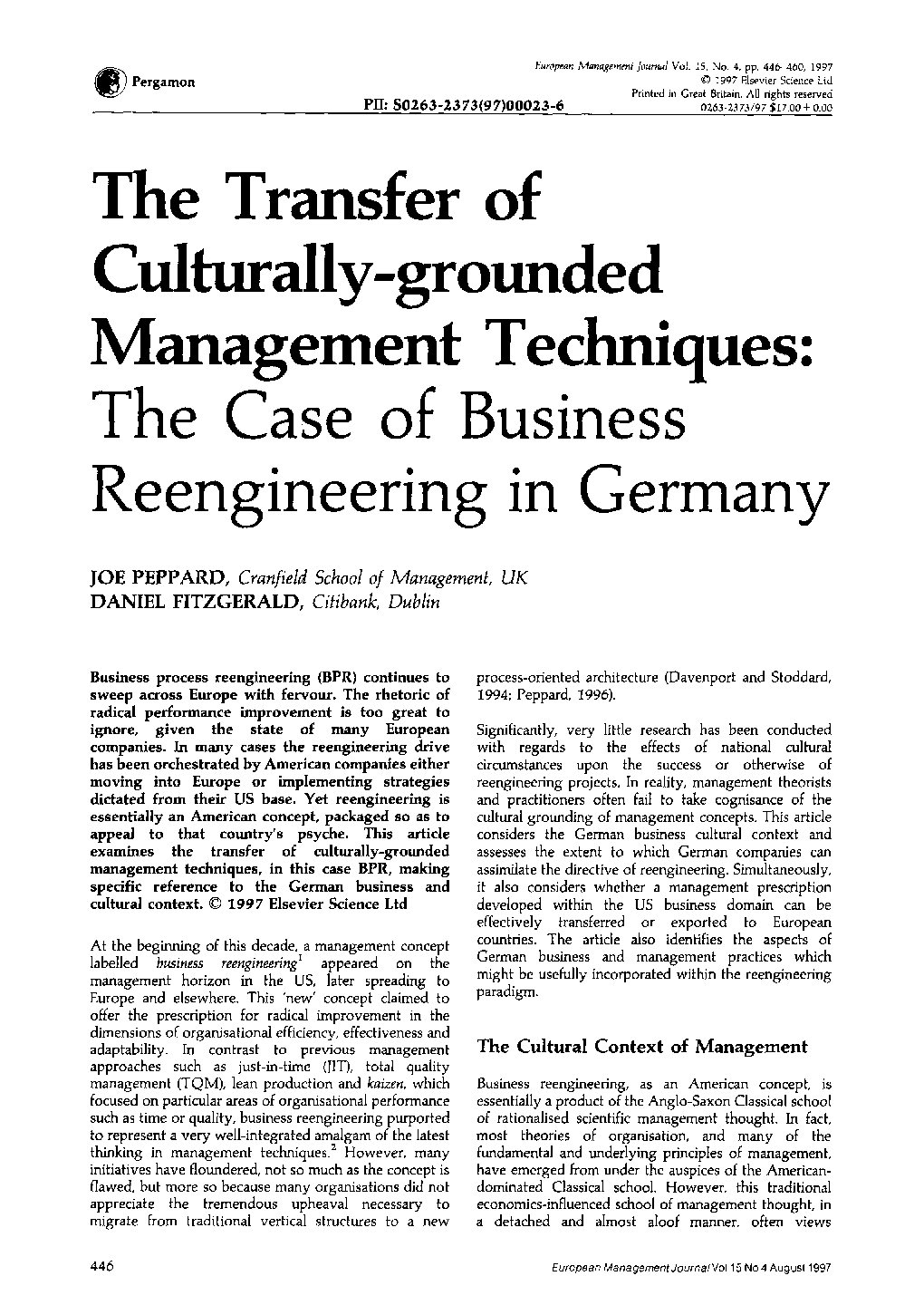 Business process reengineering (BPR) continues to sweep across Europe with fervour. The rhetoric of radical performance improvement is too great to ignore, given the state of many European companies. In many cases the reengineering drive has been orchestrated by American companies either moving into Europe or implementing strategies dictated from their US base. Yet reengineering is essentially an American concept, packaged so as to appeal to that country's psyche. This article examines the transfer of culturally-grounded management techniques, in this case BPR, making specific reference to the German business and cultural context.

Business engineering does have a powerful message andit is that by focusing on processes, organisations havethe opportunity to significantly improve theirperformance. Driven by the advent of new informationtechnologies, a myriad of new possibilities for organisingwork open up; in essence, technology enables work to beperformed in ways which are not possible manually. Yetnot only must cognisance must be taken of the widerorganisational implications of adopting a processperspective, but due regard must also be given to thecultural context of business and management.This article has examined the transferability of theconcept of business reengineering in the context of theGerman business environment. It has established that bytaking sufficient cognisance of specific cultural andorganisational circumstances, certain reengineeringprinciples can be successfully applied to German enterprises.Others may need to be refined somewhat beforethey can be incorporated within any change programme.Table I maps the key elements of business reengineeringagainst the key traits of the Germanic cultural context. Ifthere is a lesson, it is that an appreciation of the culturalis a basic requirement for the success of anychange management initiative. Yet this is a lesson which should have been learned a long time ago and one whichis likely to be re-learned in the future. Reengineering is, however, by no means a panacea fororganisational ills, and any organisation consideringimplementing a business reengineering initiative must befully aware of the likely costs, benefits and risks. In fact,many successful German firms, particularly in themittelstand, may have no need for reengineering in theradical form, as advocated by some. 27 However, usingbusiness reengineering to cut costs alone may not beenough and, in certain industries, German companies doneed to become more innovative (Kluge et aI., 1996).The increased openness of German firms to newmanagement techniques in recent years can only benefit German management in the long run. By the same token,German management should never relinquish itsdiscerning and considered approach to the applicabilityof foreign management philosophies. New ideas andconcepts can be a catalyst to question fundamentalassumptions and beliefs about organisation andmanagement. The practice of management is not static, and new ideas offer potential opportunities. Theseshould be tempered by many factors, particularly culturalcontext. Even at a macro level, business and economicpractices should be constantly revaluate& For example,the Soziale Marktwirtschaft, a cornerstone of the German economic miracle, is now coming under increasingpressure, and its applicability in its current form intoday's global economy is being questioned.In the broader context, the culture-bound view ofmanagement is valid to a certain extent. However, givensufficient cultural sensitivity and consideration, certainmanagement philosophies can be successfully transferred outside their own cultural birthplace. A recent paperexamining BPR in China concluded that while Hammerand Champy (1993) contended that 'tradition counts fornothing' (Martinsons, 1996: 49), the Confucian traditionof that country will constrain the implementation ofradical reforms. The argument is that reengineering, inits 'pure' form, would require an unprecedented overhaulof fundamental Chinese values.An interesting starting point for future research wouldbe to explore whether a transfer of managementtechniques in the reverse direction - from Europe tothe US - might work: Certainly, many firms on the otherside of the Atlantic could do far worse than analyse thestrengths of the German mittelstand. 28