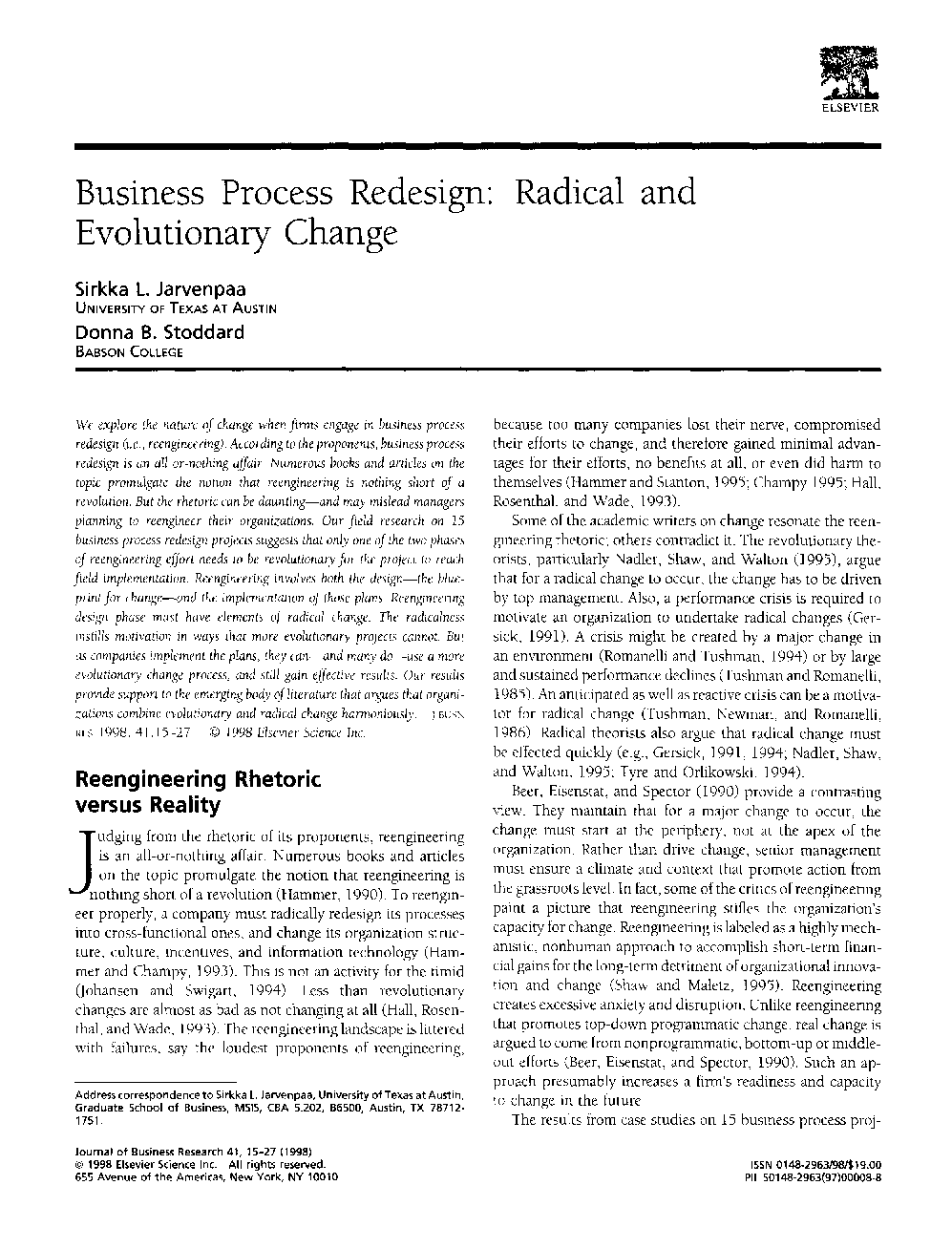 We explore the nature of change when firms engage in business process redesign (i.e., reengineering). According to the proponents, business process redesign is an all-or-nothing affair. Numerous books and articles on the topic promulgate the notion that reengineering is nothing short of a revolution. But the rhetoric can be daunting—and may mislead managers planning to reengineer their organizations. Our field research on 15 business process redesign projects suggests that only one of the two phases of reengineering effort needs to be revolutionary for the project to reach field implementation. Reengineering involves both the design—the blueprint for change—and the implementation of those plans. Reengineering design phase must have elements of radical change. The radicalness instills motivation in ways that more evolutionary projects cannot. But as companies implement the plans, they can—and many do—use a more evolutionary change process, and still gain effective results. Our results provide support to the emerging body of literature that argues that organizations combine evolutionary and radical change harmoniously.

Radical design is at the heart of reengineering. Organizationsthat seek to reengineer must start with the radical designphase. The radical design phase creates the enthusiasm and momentum needed for the change to unfold. Reengineeringimplementation is not necessarily radical, however.When starting a reengineering program, managementneeds to assess the appropriate tactics to implementation. Ifthe organization is in the midst of a survival crisis, that changemay have to unfold in a revolutionary fashion. However, if theorganization has time, a more evolutionary implementationapproach can allow the organization to move forward in a managed and measured fashion.Only one of the two stages of the engineering effort needs to be revolutionary. Reengineering involves both the design--theblueprint for change--and the implementation of those plans.Reengineering designs must be radical: breakthrough designs provide a long-term road map for change at a company andinstill motivation in ways that more moderate plans cannot.But as companies implement the plans, they can--and many do--compromise them, and still gain effective results. Insteadof pushing through major change in a short period of time,companies may take their time unfolding the changes, compromisegoals, and take the time to involve more staff in theeffort. They may not gain "10×" improvements, but nonethelessreduce costs by 30-50%, and dramatically improve their quality and service to customers. Changes like these maybe more modest than earth shattering, but they aren't to bedismissed lightly.Moreover, few companies can afford to fully implementtheir radical designs the first time around. Revolutions aredisruptive, costly, and generally viewed as unduly risky andcounter-cultural. When such revolutions occur, sudden unplannedexecutive changes may stop the change program altogether.One CEO of an insurance company that had undertakenreengineering reflected on his experience:A board ofdirectors' maximum time span to accomplishradical change is 2 years but the minimum time for significantreengineering is 5 years. You can do reengineering ina shorter amount of time, but it must be a blood bath. Youhave to employ primarily outsiders and take a greenfield approach. It takes a lot of time to convert existing employeesto the new way of doing business. But starting freshmeans a new business and entrepreneurs; yet most boards are intolerant of entrepreneurial ventures and they are particularlyimpatient with false starts. Moreover, while reengineeringyou cannot increase or even maintain the shareholderearnings because of an acute need to invest backin the internal operations.Companies that face a survival crisis may have little choicebut to go broke or follow risky revolutionary tactics. But thosecompanies that do not face a crisis may actually do themselvesmore harm than good by trying to embrace radical changesin a revolutionary fashion. By deploying evolutionary tactics,firms initially compromise their radical vision however theyare able to get started; they are able to get on with the changeprograms, gain direct measurable benefits in the short term,and learn how to change (so as to continue to change). Overtime, the firm moves toward the radical vision through incrementalcumulative changes as long as measures and "organizationalmemory" are in place to keep score and keep the visionalive.When starting a reengineering program, management needsto assess the appropriate tacticstoimplementation. If theorganization faces a burning crisis, the organization may haveto choose costly and organizationally taxing revolutionary tactics.If, however, the management has taken a proactive postureand anticipated the need to change, time should be availableto implement the breakthrough change in an evolutionaryfashion. A well-managed organization can accomplish a breakthroughresult with evolutionary implementation tactics.