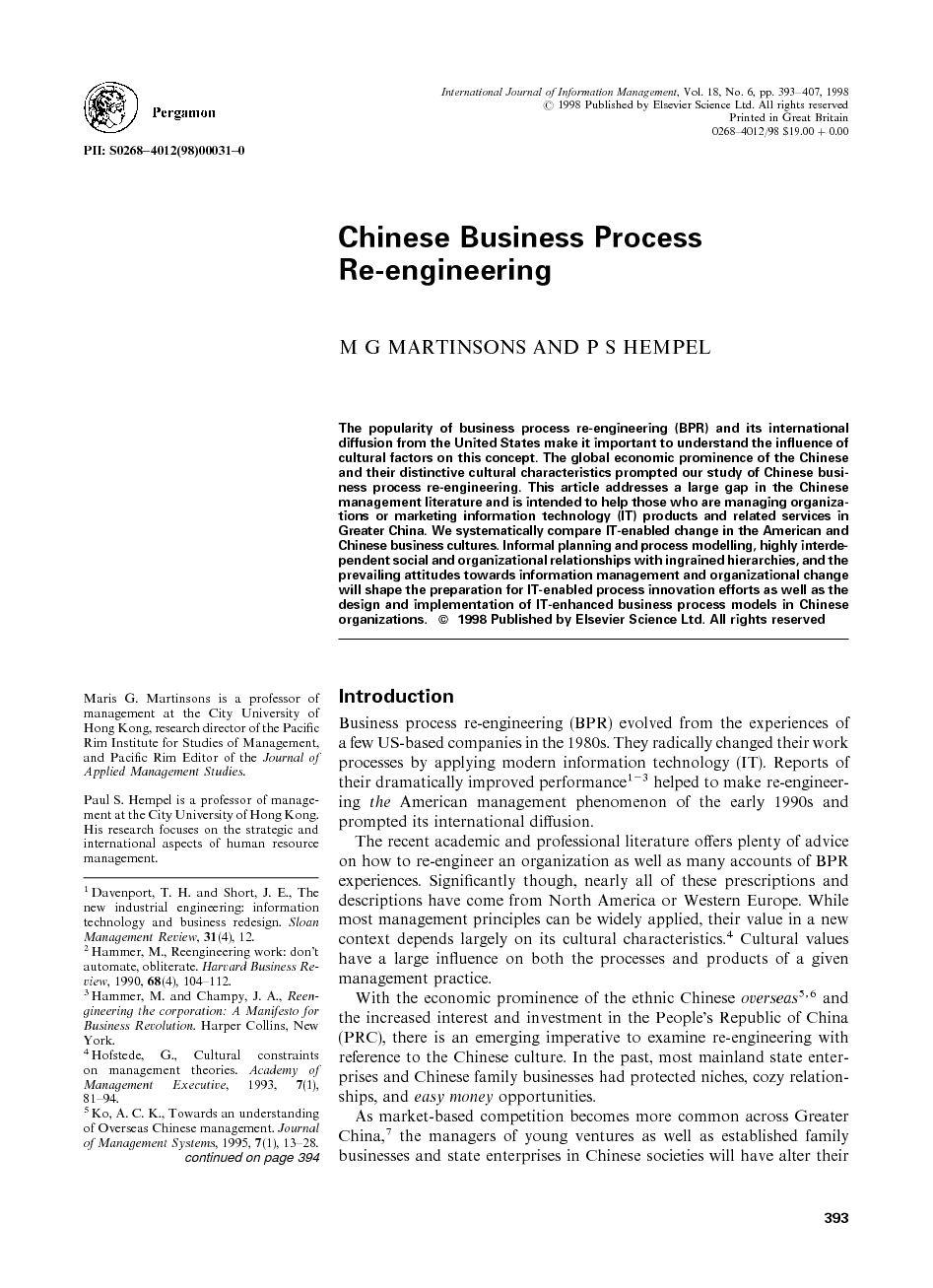 The popularity of business process re-engineering (BPR) and its international diffusion from the United States make it important to understand the influence of cultural factors on this concept. The global economic prominence of the Chinese and their distinctive cultural characteristics prompted our study of Chinese business process re-engineering. This article addresses a large gap in the Chinese management literature and is intended to help those who are managing organizations or marketing information technology (IT) products and related services in Greater China. We systematically compare IT-enabled change in the American and Chinese business cultures. Informal planning and process modelling, highly interdependent social and organizational relationships with ingrained hierarchies, and the prevailing attitudes towards information management and organizational change will shape the preparation for IT-enabled process innovation efforts as well as the design and implementation of IT-enhanced business process models in Chinese organizations.

Business process re-engineering (BPR) evolved from the experiences ofa few US-based companies in the 1980s. They radically changed their workprocesses by applying modern information technology (IT). Reports oftheir dramatically improved performance1~3 helped to make re-engineeringthe American management phenomenon of the early 1990s and prompted its international di¤usion.The recent academic and professional literature o¤ers plenty of adviceon how to re-engineer an organization as well as many accounts of BPR experiences. SigniÞcantly though, nearly all of these prescriptions anddescriptions have come from North America or Western Europe. Whilemost management principles can be widely applied, their value in a newcontext depends largely on its cultural characteristics.4 Cultural valueshave a large inßuence on both the processes and products of a givenmanagement practice.With the economic prominence of the ethnic Chinese overseas5,6 andthe increased interest and investment in the PeopleÕs Republic of China(PRC), there is an emerging imperative to examine re-engineering withreference to the Chinese culture. In the past, most mainland state enterprisesand Chinese family businesses had protected niches, cozy relationships,and easy money opportunities.As market-based competition becomes more common across GreaterChina,7 the managers of young ventures as well as established family businesses and state enterprises in Chinese societies will have alter theirways of doing business. They, as well as those providing IT products andrelated services to them, will need to understand how the principles ofbusiness process re-engineering may apply by Chinese organizations.We consider how speciÞc aspects of the Chinese business culture will shape IT-enabled process change. Since the Þrst wave of organizations inChina have just started to introduce BPR-like changes, meaningful inferencesfrom empirical studies (let alone deÞnitive conclusions) are not yetpossible. However, by integrating and interpreting knowledge from di¤erentliteratures, we hope to shed light on this topic, and develop propositions that can be tested at a later time.Intra-cultural variations within both Western and Chinese societies aresigniÞcant, but they pale in comparison to the fundamental inter-cultural di¤erence between West and East.8~10 The distinctive philosophical, historicaland economic inßuences on American and Chinese society and theAmerican roots of re-engineering make it appropriate to examine Chinesebusiness process re-engineering by systematically comparing it to thatalready undertaken by Þrms in the United States.We Þrst review the prescriptive and descriptive BPR literature and thenoutline the Confucian-based values and resulting management systems thatprevail in Greater China. This enables us to develop speciÞc propositionsthat compare re-engineering in the American and Chinese business contexts.

Technological possibilities, evolving market demands and adverse economicconditions have combined to make radical IT-enabled processchange e¤orts very popular in recent years. Business consultants havesuccessfully promoted concepts such as re-engineering to Western managers,and generated an enormous amount of interest in them. Unfortunately,many BPR e¤orts have failed to meet expectations. Some havelacked the authoritarian leadership that is common in the Chinese businessculture. Others were simply out of step with the prevailing culture ofthose who are directly a¤ected by it.It is signiÞcant that Total Quality Management, while originated by anAmerican, found its initial success in Japan. This may be attributed to the Þt of its fundamental tenets with Japanese (and Asian) values. When TQMbecame popular in the US, adjustments were needed to make it moreconsistent with American cultural values. BPR resulted indirectly from these modiÞcation. The business processorientation of TQM was employed to harness the growing potential ofmodern IT. The propositions developed here, and depicted in Figure 1,identify the need for changes in the preparation, design and implementationphases of BPR as it is transplanted to Greater China. They also point to the potential dangers of entrenching a new form of ScientiÞc Management.A highly mechanistic approach to assimilating IT is likely to impedethe very organizational innovation that is critical for long-term businesssuccess.Hammer84 and others have taken an uncompromising either-or stancewith respect to BPR. However, as the BPR concept matures and evolves,process-based change initiatives are moving beyond the machine metaphor, and being undertaken in a more holistic and humane manner.Managers are being asked tonot only revise their business models but alsoto enable on-going modiÞcations to cope with unrelenting environmentalchanges.Many radical changes may be implemented incrementally Ð in severalstages over an extended period of time. Hammer and Champy87 (p. 212) contend that ÔÔTwelve months should be long enough for a company tomove from articulation of a case for action to the Þrst Þeld release ofa reengineered process.ÕÕ In contrast, the lead authorÕs experience suggeststhat the probability of successfully adopting a revolutionary design rises ifit is implemented in an evolutionary fashion. Successful changes tend tounfold naturally and ßexibly rather than being imposed forcefully orrigidly. If (and this a signiÞcant if ) BPR does gain popularity amongChinese businesses, they are likely to adopt a more moderate approach. Assuggested by Eisley and Tang,88 many Asian Þrms that lack the resourcesor compelling reason for rapid or radical change will follow an evolutionaryapproach to IT development, a ÔÔmiddle pathÕÕ that promotes ßexibility.As managers across Greater China come to face more dynamic andhostile business environments, they can certainly learn from the experiencesof their Western counterparts. Their knowledge base will be enriched by a familiarity with the principles and results of BPR. Nevertheless, theywill have to thoroughly understand their own cultural context if theirorganizations are to fully realize the potential beneÞts of IT. This goesback to socio-technical systems thinking, which stresses theimportance ofa good Þt between people and technology. With BPR, the expectedrewards must be weighed against the risks, especially those related to theneed to challenge and disturb existing norms and attitudes.Trends in the external business environment, such as market deregulation,growing requirements for Western-style accounting, and a pent-up demand for IT do favour the adoption of BPR-like interventions acrossGreater China. However, genuine BPR would require tremendous andunprecedented changes in the fundamental values of the Chinese. Forexample, the technical knowledge, creativity and energy of a youngergeneration that holds low-level positions would have to be accommodated by a culture that has a deeply embedded tradition of deference to superiorsand respect for experience.Chinese business leaders have traditionally used their positions ofauthority to achieve behavioural changes in their subordinates. They maynow have to demonstrate their ability to balance this top-down controlwith bottom-up innovation, and inspire a transformation in the attitudesand beliefs of their organizational members. The di¦culty of achieving such a cultural change is evident in the former Soviet Union, where there islarge-scale unlearning of the socialist values that were introduced only afew decades ago.The innovative use of IT (which is required for BPR) would representa quantum leap from the restricted use of computers in most Chineseenterprises. Nevertheless, such progress may be required in order tomaintain or raise economic competitiveness levels and living standards.We suggest that the information age success of Chinese businesses willhinge on their ability to assimilate modern values and managementpractices as well as technologies.As their enterprises continue to develop amidst the aftershocks of theAsian Þnancial crisis, managers across Greater China will have to workhard to pre-empt the crises that have driven their American counterparts to embrace re-engineering. It will be essential for them to Þnd ways offostering greater productivity, ßexibility and satisfaction in their workenvironments. Many of these concepts will pose a threat to the traditionalChinese manager, who has tightly controlled key information in order tomaintain power, but other alternatives may be even less attractive.The reform of Chinese state-owned enterprises will undoubtedly bea very di¦cult process. Not only will these reforms be unprecedented inmagnitude, but the propositions formulated here also imply that theChinese will have to modify many of the original principles of re-engineering.Positive reinforcement could be used to reward both Chinese workerswho become more proactive and take on process ownership responsibilitiesand those managers who do inspire cultural change rather than merelymandate behavioural change.