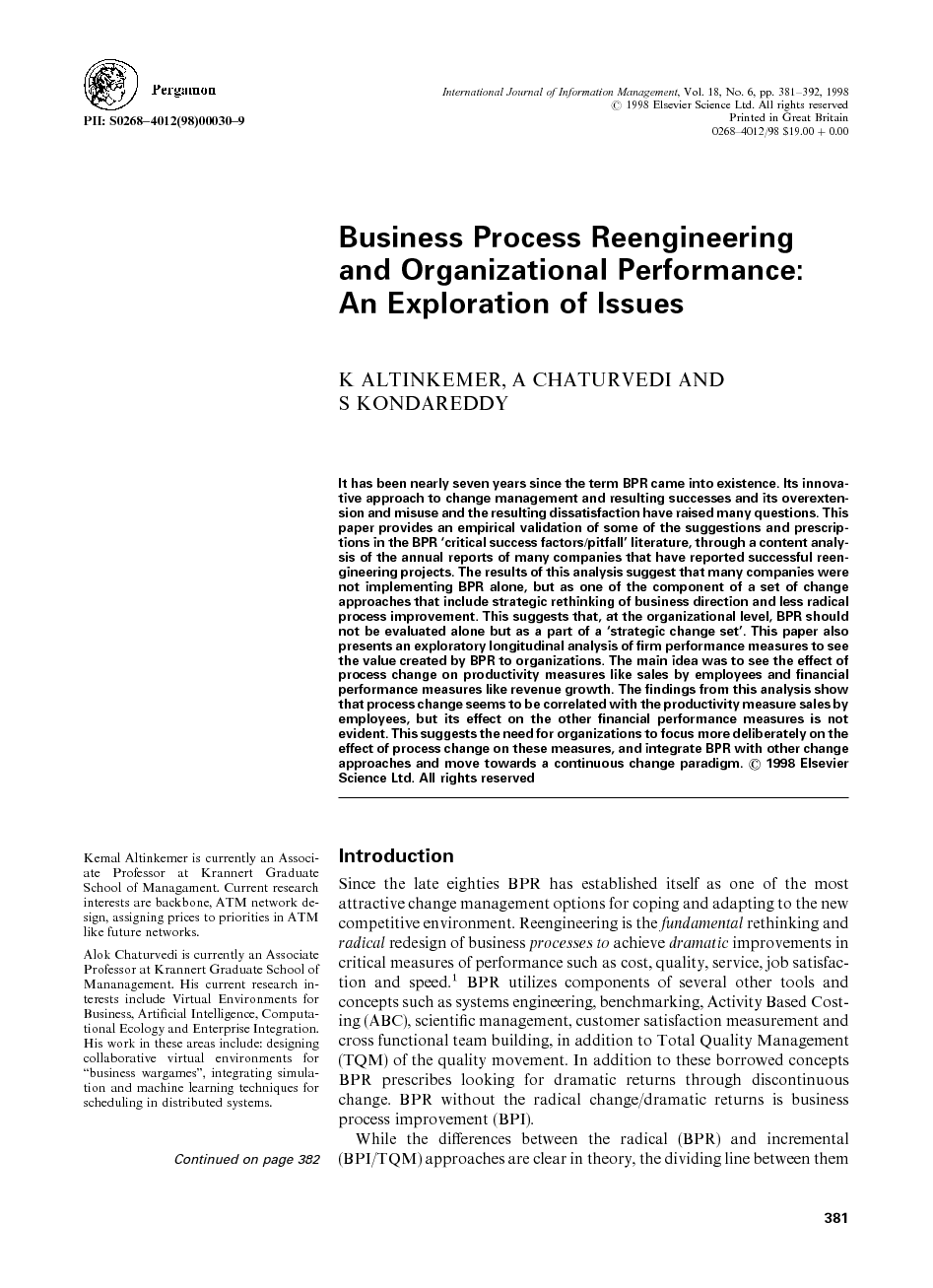 It has been nearly seven years since the term BPR came into existence. Its innovative approach to change management and resulting successes and its overextension and misuse and the resulting dissatisfaction have raised many questions. This paper provides an empirical validation of some of the suggestions and prescriptions in the BPR ‘critical success factors/pitfall’ literature, through a content analysis of the annual reports of many companies that have reported successful reengineering projects. The results of this analysis suggest that many companies were not implementing BPR alone, but as one of the component of a set of change approaches that include strategic rethinking of business direction and less radical process improvement. This suggests that, at the organizational level, BPR should not be evaluated alone but as a part of a ‘strategic change set’. This paper also presents an exploratory longitudinal analysis of firm performance measures to see the value created by BPR to organizations. The main idea was to see the effect of process change on productivity measures like sales by employees and financial performance measures like revenue growth. The findings from this analysis show that process change seems to be correlated with the productivity measure sales by employees, but its effect on the other financial performance measures is not evident. This suggests the need for organizations to focus more deliberately on the effect of process change on these measures, and integrate BPR with other change approaches and move towards a continuous change paradigm.

The Þrst section gave a brief introduction to BPR, its role in typicalorganizational change strategies and the lessons learned from early failuresof indiscriminate BPR projects. Next, we provided an empiricalvalidation of some of the suggestions and observations in the BPR Ôcriticalsuccess factors/pitfallÕ literature. This paper explored the components ofthe strategic change set of companies reported as reengineering successstories, through the content analysis of their annual reports. This analysisshowed that few companies were using reengineering as a stand-alonechange strategy to cope with changing environments. Companies that hadsuccessfully reengineered were following most of the prescriptions for successful reengineering in the Ôcritical success factors/pitfallÕ literature,except moving away from cost cutting to revenue building. The nextsection of this paper also described an exploratory longitudinal analysis ofthe Þnancial performance measures of these successfully reengineeredÞrms. This study conÞrmed the positive e¤ect of reengineering on sales by employee, but no such e¤ect on other Þnancial performance measures wasapparent. If the objective of a process-change-centered strategic change setis the long-term competitive performance of the Þrm, then that objective isnot being achieved. To achieve such performance gains companies shoulduse deliberate strategy to guide process change e¤orts to build revenue,and should move away from one-time change approaches to a more continuous approach. There is need for a more comprehensive analysis tocome to more deÞnite conclusions. Such an analysis should try to surveypractitioners directly, as getting data from the literature is not very fruitful.Such a direct survey could also design and use measures of businesschange.