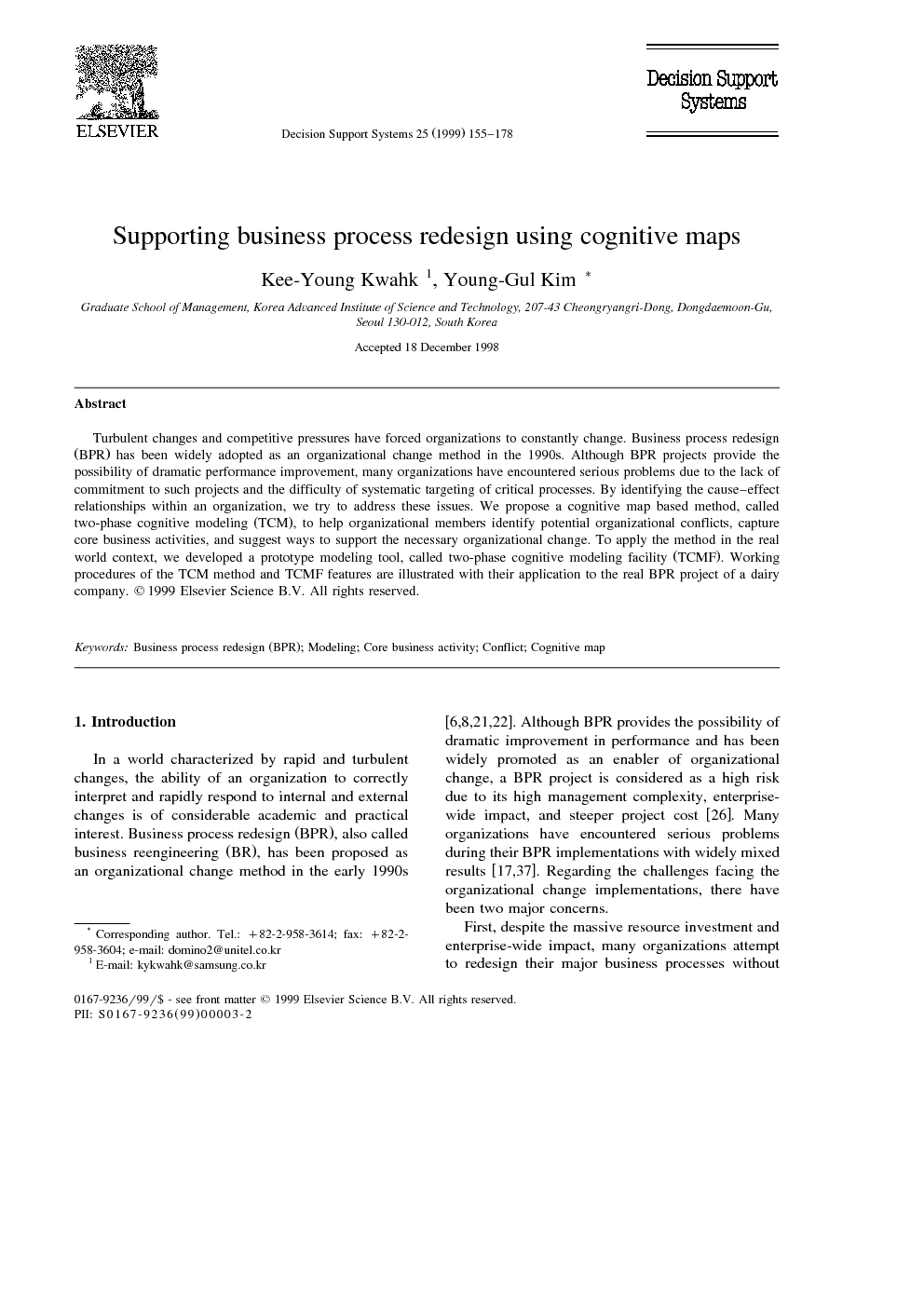 Turbulent changes and competitive pressures have forced organizations to constantly change. Business process redesign (BPR) has been widely adopted as an organizational change method in the 1990s. Although BPR projects provide the possibility of dramatic performance improvement, many organizations have encountered serious problems due to the lack of commitment to such projects and the difficulty of systematic targeting of critical processes. By identifying the cause–effect relationships within an organization, we try to address these issues. We propose a cognitive map based method, called two-phase cognitive modeling (TCM), to help organizational members identify potential organizational conflicts, capture core business activities, and suggest ways to support the necessary organizational change. To apply the method in the real world context, we developed a prototype modeling tool, called two-phase cognitive modeling facility (TCMF). Working procedures of the TCM method and TCMF features are illustrated with their application to the real BPR project of a dairy company.

In a world characterized by rapid and turbulent changes, the ability of an organization to correctly interpret and rapidly respond to internal and external changes is of considerable academic and practical interest. Business process redesign (BPR), also called business reengineering (BR), has been proposed as an organizational change method in the early 1990s 6, 8, 21 and 22. Although BPR provides the possibility of dramatic improvement in performance and has been widely promoted as an enabler of organizational change, a BPR project is considered as a high risk due to its high management complexity, enterprise-wide impact, and steeper project cost [26]. Many organizations have encountered serious problems during their BPR implementations with widely mixed results 17 and 37. Regarding the challenges facing the organizational change implementations, there have been two major concerns. First, despite the massive resource investment and enterprise-wide impact, many organizations attempt to redesign their major business processes without thorough consideration for commitment to changes [17]. Based on Kling's [30]work, Markus [35]explains the resistance to change and implementation difficulties in terms of the conflicts among participants. Managers or change agents spend a substantial proportion of their time and energy dealing with conflict situations [16]. Such efforts are necessary because any type of change in an organization tends to generate conflicts. Their effectiveness in conflict management depends on how well they understand the underlying dynamics of the conflict [39]. Without commitment to change, a BPR project will suffer from resistance of the participants, in particular, those belonging to the process(es) to be redesigned. Secondly, the business context has to be understood to enable the BPR team to identify the potential problem or opportunity activities before creating a new process or redesigning the existing ones 7, 15, 17, 18, 28 and 38. However, it is not a trivial task to identify and capture these activities systematically. As Barua et al. [2]notes, many BPR projects have been frequently targeted toward inappropriate variables which have little or no impact on the organizational payoff. Most BPR methods tend to rely on the intuitive judgment of the analyst in capturing core business activities, by and large, based on the interviews or documents without thoroughly considering how functional units interact each other. To address the above concerns—lack of understanding for potential organizational conflicts and improper targeting of critical processes in the initial stage of BPR, we propose a method, called two-phase cognitive modeling (TCM). The TCM method helps to support the organizational change project such as BPR, based on the analysis of cognitive maps. It is expected to facilitate consensus elicitation toward common organizational goal and core business activities among BPR managers, IS staffs, and organizational members in the initial stage of a BPR project. To apply the method in the real world context, we developed a prototype modeling tool, called two-phase cognitive modeling facility (TCMF). This system enhances applicability of the TCM method. The rest of the paper proceeds as follows. Section 2deals with the literature review relevant to our study. 3 and 4introduce the proposed method and the prototype system, respectively. Section 5describes the real-world application of the TCM method with the TCMF features. Section 6discusses implications and future directions of this research.

We proposed the TCM method to support the initial stage of BPR based on the analysis of cognitive maps. The supporting process proceeds in two phases: cognitive model generation and causal path computation. By integrating the two phases, the method helps to capture potential conflicts and identify core business activities. To facilitate the TCM method, we developed the TCMF which consists of six subsystems. Finally, to validate the TCM method and the TCMF system, we applied them to a real-world company. The working procedure was described with the TCMF screens. The TCM method has several implications for an organization which is planning an organizational change project at the enterprise level. First, the method facilitates the identification of the interactions among functional units. The identified interactions might lead to revealing the most effective communication paths, over the existing formal communication paths. Such communication paths play an important role in a potential conflict situation. Second, the method helps to identify core business activities by looking into people's thoughts and actions for the organizational goal. The ability of capturing core business activities relieves the efforts in the initial stage of the enterprise level project and provides a good starting point for the project. Third, consensus drawing among various functional units can be facilitated by the method. Without commitment to changes, projects suffer from resistance of the participants, in particular, who belong to the functional area(s) to be redesigned. By the process of identifying the cause–effect relationships, organizational members come to understand each other better, and they become willing to transform their ideas into corporate synergy. Such a consensus will promote the commitment of the participants to the project. Fourth, the method provides an opportunity to reduce organizational equivocality. Equivocality is the ambiguity based on the existence of multiple and conflicting interpretations about an organizational situation [45]. As Daft and Huber [4]notes, equivocality can be reduced through the exchange of opinions, perceptions of relevant managers, construction of a joint cognitive map, and rapid feedback. Currently, however, there are several limitations in the method. First, the method begins with the assumption that organizational members or their groups participate in creating their own cognitive maps which appropriately reflect cause–effect relationships in an organization. Strictly speaking, however, it is not easy to produce a theoretically robust and valid causal model. Second, it is hard to obtain causal values which are agreeable to everyone. Although this research suggested a pairwise comparison based technique, this issue still remains to be further examined. Third, the method does not consider the cause–effect relationships with time delay among causal concepts. A causal concept may affect the other one with time delay. Fourth, our approach may be well suited for strategic problems, not BPR. The causal impact paths do not imply the business processes directly. The focus on the constructs and relationships is not per se a process perspective. The interpretation of the analysts is required for capturing the corresponding business processes appropriately. One of the future directions of this research is to include the time dimension in the method. For more realistic modeling, it is necessary to represent the time delay effect among the interrelated causal concepts. Another direction is to extend our modeling method into the areas of integrated process and data modeling since cognitive modeling can complement the other two enterprise modeling activities.