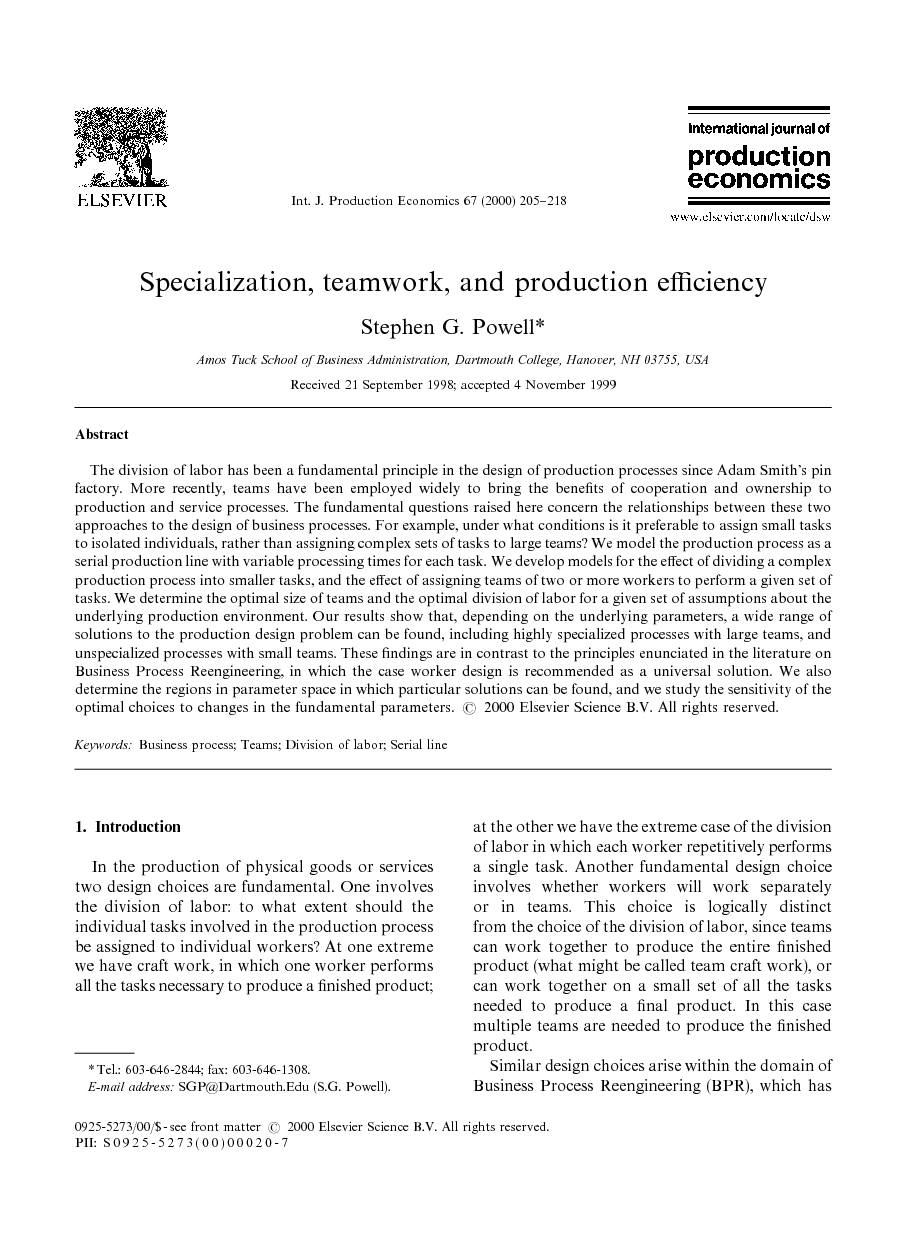 The division of labor has been a fundamental principle in the design of production processes since Adam Smith's pin factory. More recently, teams have been employed widely to bring the benefits of cooperation and ownership to production and service processes. The fundamental questions raised here concern the relationships between these two approaches to the design of business processes. For example, under what conditions is it preferable to assign small tasks to isolated individuals, rather than assigning complex sets of tasks to large teams? We model the production process as a serial production line with variable processing times for each task. We develop models for the effect of dividing a complex production process into smaller tasks, and the effect of assigning teams of two or more workers to perform a given set of tasks. We determine the optimal size of teams and the optimal division of labor for a given set of assumptions about the underlying production environment. Our results show that, depending on the underlying parameters, a wide range of solutions to the production design problem can be found, including highly specialized processes with large teams, and unspecialized processes with small teams. These findings are in contrast to the principles enunciated in the literature on Business Process Reengineering, in which the case worker design is recommended as a universal solution. We also determine the regions in parameter space in which particular solutions can be found, and we study the sensitivity of the optimal choices to changes in the fundamental parameters.

In the production of physical goods or services two design choices are fundamental. One involves the division of labor: to what extent should the individual tasks involved in the production process be assigned to individual workers? At one extreme we have craft work, in which one worker performs all the tasks necessary to produce a finished product; at the other we have the extreme case of the division of labor in which each worker repetitively performs a single task. Another fundamental design choice involves whether workers will work separately or in teams. This choice is logically distinct from the choice of the division of labor, since teams can work together to produce the entire finished product (what might be called team craft work), or can work together on a small set of all the tasks needed to produce a final product. In this case multiple teams are needed to produce the finished product. Similar design choices arise within the domain of Business Process Reengineering (BPR), which has been defined as the application of industrial engineering principles to the design of service sector processes [1]. One of the fundamental insights in the early literature on BPR is that processes that have traditionally been carried out using an extreme division of labor can be drastically improved by replacing the serial production process with a single worker known as a case manager. Hammer cites an example involving the processing of insurance applications [2]. The original process involved 30 distinct steps, 19 workers, and five departments. In the reengineered process this serial production process is replaced by a parallel process, in which each application is handled from start to finish by a case worker (with support as needed from computer systems and a few specialists). There has been a consistent theme in the BPR literature that serial processes, with their extreme divisions of labor, multiple delay points, and limited ownership, are outdated and should be replaced by case-worker-based processes. In fact, some see BPR as a revolution against traditional production principles: BPR is a direct attack against the principles of functional specialization and incremental improvement that lie at the very foundation of the industrial revolution. [3] Only recently has the research community begun to examine the claims of the BPR movement seriously. Buzacott, for example, used queueing theory to investigate the conditions under which the commonly cited principles of BPR are applicable [4]. In a series of papers, Seidmann and Sundararajan investigated the influence of task assignment, technology support, and performance incentives on optimal process design [5], [6], [7] and [8]. These papers suggest that some of the claims made within the BPR movement on the superiority of certain types of production processes may be exaggerated. This paper examines a related set of issues, using the tools of modeling and simulation to generate insights into the optimal design of production processes for goods or services. In this paper we seek to answer the following general question: given a business process with a fixed number of elementary tasks and a fixed labor force, what is the optimal number of tasks and workers to assign to each team? To answer this question, we must first develop models that incorporate the changes in production efficiency that occur as tasks are assigned to a single worker, and as workers are assigned to a team. Once we have assigned the number of tasks and workers we have implicitly determined the length of the production process and the number of parallel processes. We can then determine the throughput of each production line and of the entire collection of lines. This allows us to determine the optimal assignments within the given constraints. The fundamental trade-offs involved in the optimal assignment of tasks and workers involve the effects of specialization, teamwork, and production efficiency in serial production lines. For example, one would expect a relative loss of efficiency as more tasks are assigned to each worker since specialization is reduced. However, as each worker performs more tasks the length of the production process is reduced and this will result in less stochastic interference between workers and an increase in efficiency. Similarly, as more team members are assigned to a set of tasks one might expect efficiency to increase due to cooperation among workers (perhaps with diminishing returns) but the result will also be fewer parallel lines and perhaps less efficiency. These are the trade-offs we explore in this paper. In the next section we will review the literature in two areas related to this work: production lines and BPR. In Section 3 we will develop models for task times as a function of the number of tasks and the number of team members. We will then use these models to determine line and factory throughput. Our strategy is to develop simple and flexible models at this basic level, so that we have a minimal number of easily interpreted parameters to work with. In Section 4 we use the model to explore the optimal design of the production process. In Section 5 we illustrate the sensitivity of the optimal solution to the underlying parameters, and analyze the parameter spaces within which certain important process designs (such as the parallel, case worker design) can be expected to be optimal. We conclude the paper with suggestions for further research.