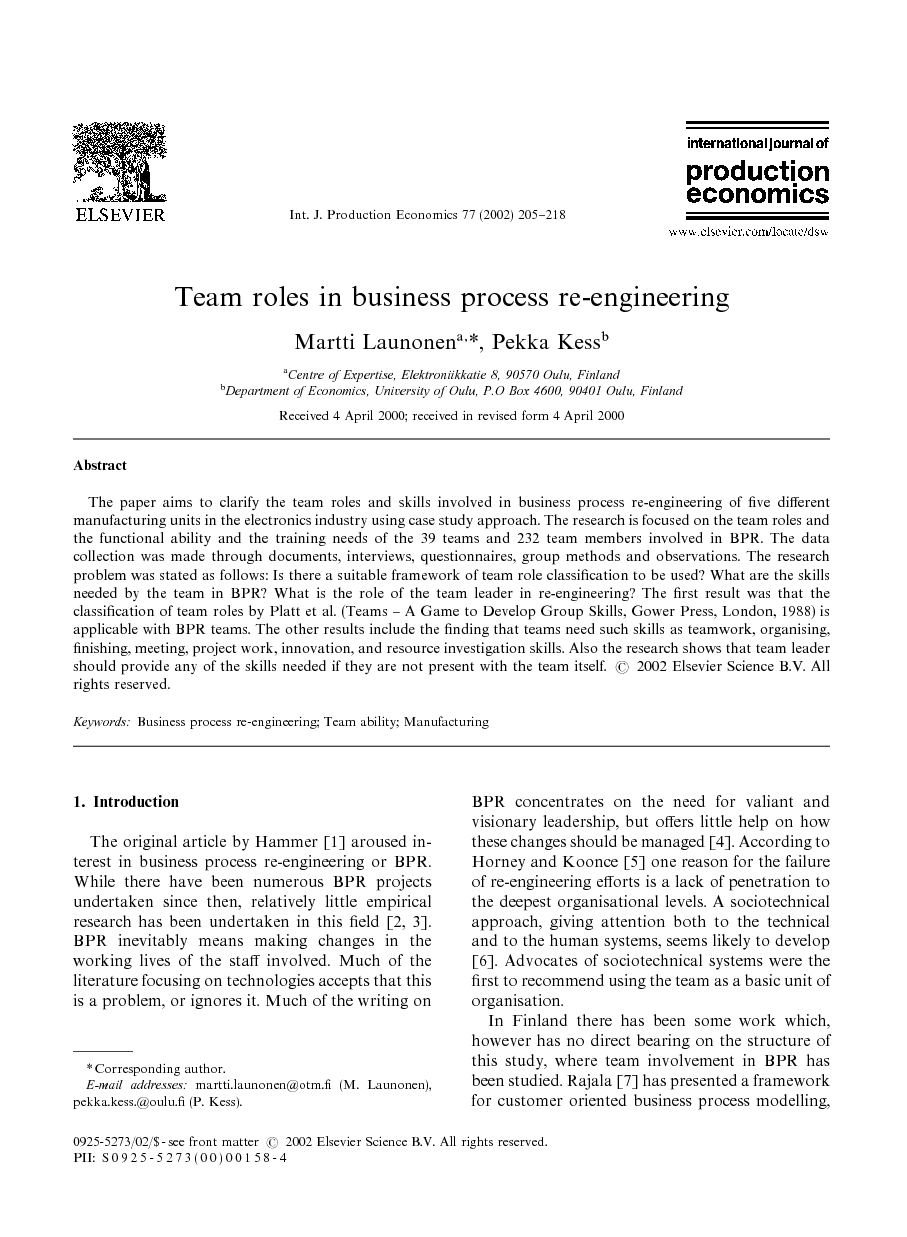 The paper aims to clarify the team roles and skills involved in business process re-engineering of five different manufacturing units in the electronics industry using case study approach. The research is focused on the team roles and the functional ability and the training needs of the 39 teams and 232 team members involved in BPR. The data collection was made through documents, interviews, questionnaires, group methods and observations. The research problem was stated as follows: Is there a suitable framework of team role classification to be used? What are the skills needed by the team in BPR? What is the role of the team leader in re-engineering? The first result was that the classification of team roles by Platt et al. (Teams – A Game to Develop Group Skills, Gower Press, London, 1988) is applicable with BPR teams. The other results include the finding that teams need such skills as teamwork, organising, finishing, meeting, project work, innovation, and resource investigation skills. Also the research shows that team leader should provide any of the skills needed if they are not present with the team itself.

The original article by Hammer [1] aroused interest in business process re-engineering or BPR. While there have been numerous BPR projects undertaken since then, relatively little empirical research has been undertaken in this field [2] and [3]. BPR inevitably means making changes in the working lives of the staff involved. Much of the literature focusing on technologies accepts that this is a problem, or ignores it. Much of the writing on BPR concentrates on the need for valiant and visionary leadership, but offers little help on how these changes should be managed [4]. According to Horney and Koonce [5] one reason for the failure of re-engineering efforts is a lack of penetration to the deepest organisational levels. A sociotechnical approach, giving attention both to the technical and to the human systems, seems likely to develop [6]. Advocates of sociotechnical systems were the first to recommend using the team as a basic unit of organisation. In Finland there has been some work which, however has no direct bearing on the structure of this study, where team involvement in BPR has been studied. Rajala [7] has presented a framework for customer oriented business process modelling, Tikkanen [8] and Alajoutsijärvi and Tikkanen [3] have carried out wide theoretical and empirical analysis concerning a network approach to industrial business processes. Tinnilä and Bask [9] have emphasized the importance of operational and strategic measurement of business processes and Tinnilä [10] has presented a conceptual analysis of process management and discussed the links between executional and structural views on business processes. Tikkanen and Pölönen [11] have evaluated business process re-engineering projects in 21 large Finnish organisations and one finding is that strong personel involvement and training is a basic requirement for the success of a BPR project. On the other hand, there has been lately some critical writings concerning BPR. For example, Stoddard et al. [12] criticise, “what was implemented in the regions differed from the design and was not as radical as planned”. In BPR efforts, ownership and commitment is needed throughout the organisation, particularly during implementation. Traditionally, analyses of groups and teams have concentrated on the assumption of individuals and individuality. The focus of research and the knowledge has not been on how to analyse and develop re-engineering teams. In the literature the importance of business, technical and functional skills is brought out [13], [14], [15] and [16]. In teamwork the necessary, prerequisite, functional skills have been proposed to be problem solving, leading meetings, communication and reaching consensus. What these functional skills must be in business process re-engineering is not detailed. In this research the functional skills (innovation, resource investigation, organising, teamwork, meeting, finishing, evaluation and project work) are defined based on Belbin's [17] model of eight key team roles and on the modification of Platt et al. [18] those roles (innovator, resource investigator, organiser, team worker, chair, finisher, evaluator and shaper) which are essential in managing teams.

Based on the analysis of 39 teams the new finding arising from this research is that the classification of Platt et al. can be applied to worker teams in re-engineering. The results enables a team to determine the roles (innovator, resource investigator, organiser, teamworker, chair, finisher, evaluator and shaper) of team members in business process re-engineering. The eight categories of functional skills (innovation, resource investigation, organising, teamwork, meeting, finishing, evaluation and project work) would appear to be based on the eight different roles needed in a re-engineering team (innovator, resource investigator, organiser, team worker, chair, finisher, evaluator and shaper) described by Platt et al. [18]. Re-engineering teams have to be able to carry out project work, solve problems, generate and evaluate new ideas and solutions, use outside resources, organise and finish project tasks. Skills of meetings and teamwork are needed in everyday interactions. A general description of the roles and tasks of the leader in teamwork is put forward in the literature reviewed. According to this and the findings of this study, the role of a leader is to strengthen and expand the team skills and shared responsibility. One new finding in this research is the role of the leader in re-engineering projects. Leader have to provide the professional and functional skills and be able change the role between different teams depending on the missing skills which the re-engineering team lacks.