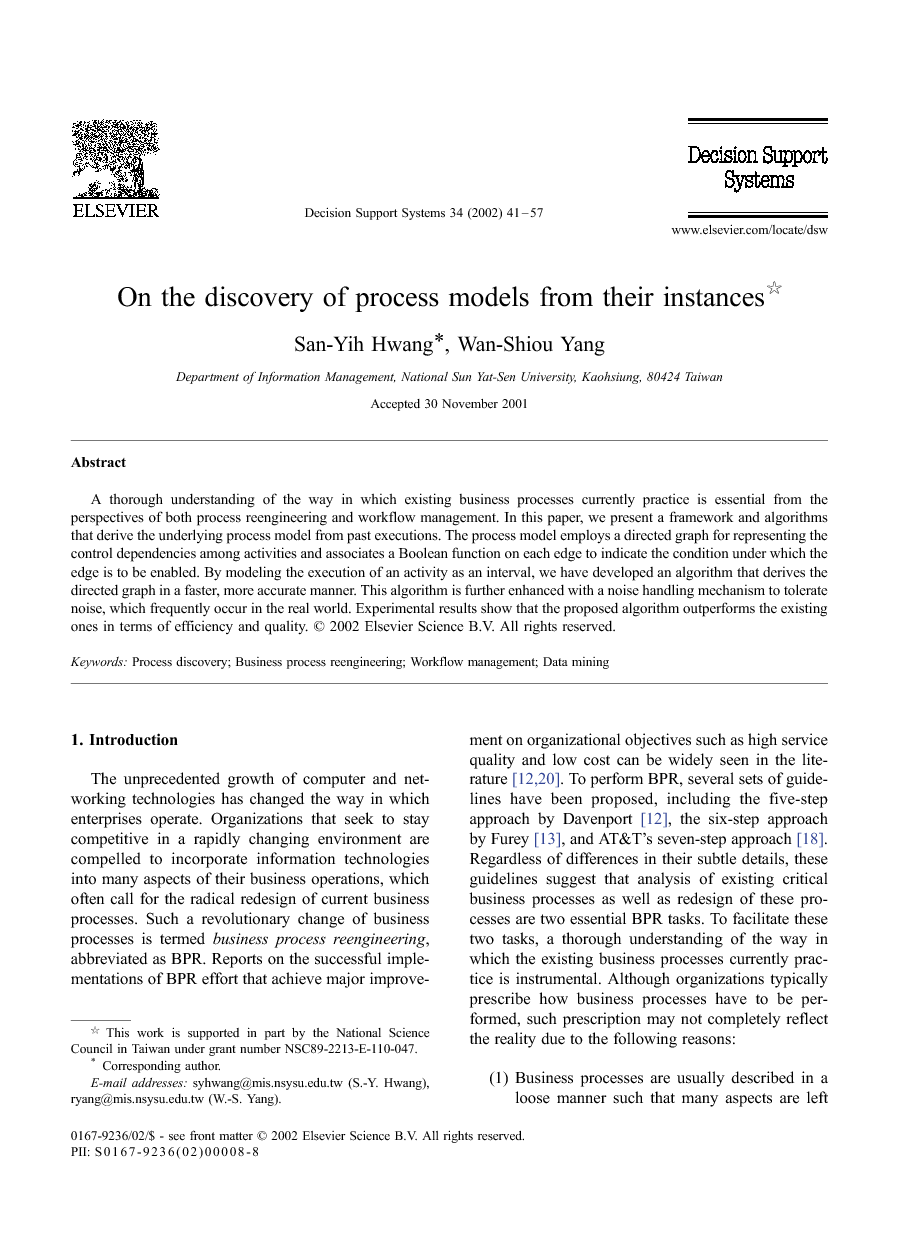 A thorough understanding of the way in which existing business processes currently practice is essential from the perspectives of both process reengineering and workflow management. In this paper, we present a framework and algorithms that derive the underlying process model from past executions. The process model employs a directed graph for representing the control dependencies among activities and associates a Boolean function on each edge to indicate the condition under which the edge is to be enabled. By modeling the execution of an activity as an interval, we have developed an algorithm that derives the directed graph in a faster, more accurate manner. This algorithm is further enhanced with a noise handling mechanism to tolerate noise, which frequently occur in the real world. Experimental results show that the proposed algorithm outperforms the existing ones in terms of efficiency and quality.

We have presented a novel approach to discovering a process model from past executions. The process model includes two components: control dependencies represented by a directed graph and the conditions pertaining to these dependencies. We have shown through both theoretic analysis and experiments that our proposed algorithm for deriving the control dependencies executes faster and is able to return more accurate results. Using intervals for modeling activity executions contributes to this improvement. Besides, we also developed a noise handling mechanism to be incorporated into the control dependency derivation algorithm. Experimental results showed that the algorithm performed well under a noise-prone environment. We have also described how to induce conditions associated with dependencies via classification techniques. These two major components together make our work a complete framework for process discovery. Many applications are eligible for generating historical information in the form of interval sets. While the framework and algorithms proposed in this paper can be applied in some of the domains, they may not fit perfectly in others, partly due to an important assumption made by virtually all process discovery research: a unique underlying process model that encompasses all process instances is assumed to exist. Consider the project execution in several occasions that aims to achieve a similar goal. Each project execution is characterized by a Gantt Chart, which comprises a set of intervals. Project executions carried out at different corporations, though pursuing the same objective, may take a significantly different approach. Thus, we can no longer expect the existence of a single process model to which all process instances conform. What we can probably best hope for are some partial process models, each of which represents features exhibited by a significant number of process instances. To this end, this problem becomes somewhat like those discussed in the data mining (or knowledge discovery) community, especially the sequential pattern discovery problem. However, most research work in the context of sequential pattern discovery intends to find total orders on some constituent items, whereas we are interested in finding structures like the process model digraph described in this paper. The intrinsic sophistication of the process model digraph makes this problem challenging. We have embarked on a study of this problem, and a preliminary result has been reported in Ref. [28].