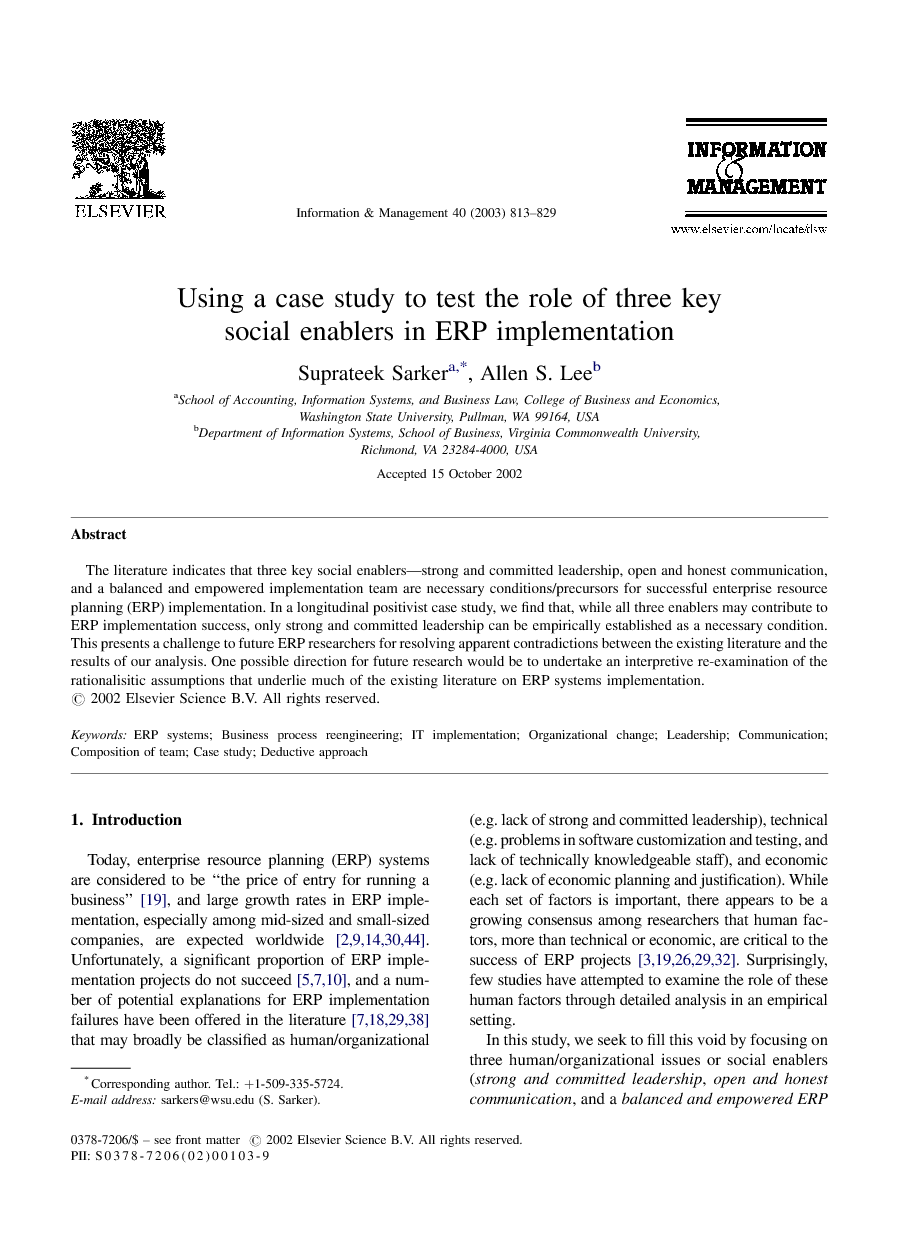 The literature indicates that three key social enablers—strong and committed leadership, open and honest communication, and a balanced and empowered implementation team are necessary conditions/precursors for successful enterprise resource planning (ERP) implementation. In a longitudinal positivist case study, we find that, while all three enablers may contribute to ERP implementation success, only strong and committed leadership can be empirically established as a necessary condition. This presents a challenge to future ERP researchers for resolving apparent contradictions between the existing literature and the results of our analysis. One possible direction for future research would be to undertake an interpretive re-examination of the rationalisitic assumptions that underlie much of the existing literature on ERP systems implementation.

Today, enterprise resource planning (ERP) systems are considered to be “the price of entry for running a business” [19], and large growth rates in ERP implementation, especially among mid-sized and small-sized companies, are expected worldwide [2], [9], [14], [30] and [44]. Unfortunately, a significant proportion of ERP implementation projects do not succeed [5], [7] and [10], and a number of potential explanations for ERP implementation failures have been offered in the literature [7], [18], [29] and [38] that may broadly be classified as human/organizational (e.g. lack of strong and committed leadership), technical (e.g. problems in software customization and testing, and lack of technically knowledgeable staff), and economic (e.g. lack of economic planning and justification). While each set of factors is important, there appears to be a growing consensus among researchers that human factors, more than technical or economic, are critical to the success of ERP projects [3], [19], [26], [29] and [32]. Surprisingly, few studies have attempted to examine the role of these human factors through detailed analysis in an empirical setting. In this study, we seek to fill this void by focusing on three human/organizational issues or social enablers (strong and committed leadership, open and honest communication, and a balanced and empowered ERP implementation team) that have been suggested to be necessary conditions for ERP implementation success in the literature.1 While we do not claim that these are the only social enablers that deserve careful investigation, we have chosen to study them because of the importance attributed to them in the ERP literature. We examine the role of these key enablers using an intensive longitudinal case study of a company that implemented an ERP system in three phases. Table 1 summarizes results of our case study, in which we evaluated the outcome of each phase and the presence or absence of the hypothesized necessary conditions. Our analysis reveals that strong and committed leadership is essential to the success of an ERP implementation initiative; however, the presence of open and honest communication and an empowered and balanced implementation team cannot be empirically established as “necessary conditions” for ERP implementation success (as implied in the literature). This finding provides future ERP researchers with a puzzle regarding the three enablers that is worthy of further investigation.Our paper is organized as follows. In Section 2, we develop the propositions regarding the three social enablers. In Section 3, we discuss our methodology. In Section 4, we describe our case study and test the propositions developed. In Section 5, we discuss some implications for future research.

In attempting to build a foundation for a process theory of successful ERP implementation, we discerned three propositions (P1, P2, and P3 in Section 3) from the ERP literature. Our case analysis validated proposition P1. The practical implication of this finding is that strong and committed leadership at the top management level, at the project management level, and of the IS function must be given significant priority throughout the life of an ERP implementation project. However, our study refuted P2 and P3, showing that open and honest communication, and balanced and empowered teams (while possibly helpful) are not generalizable necessary conditions for success in all phases of an ERP implementation initiative, and indicating that the literature could be perpetuating “folklores” or “myths” that are based more on the normative expectations of the authors and questionnaire respondents than on “reality.” The contradictions between the literature on which the study’s propositions were based and the empirical evidence from the MANCO case study present interesting research directions for future ERP researchers. First, there is a need to investigate if (and why) different necessary conditions are indeed applicable in different phases of ERP implementation, as the recently published work seems to suggest [24] and [29]. It is useful to note here, however, that while some researchers acknowledge that different enablers/inhibitors may apply in different phases of the project, they see the three enablers tested in this study—project composition, communication, and leadership, as being relevant to all phases [29]. Second, it may be worthwhile to conduct further research on hidden contextual factors that possibly allowed strong and committed leadership to compensate for the absence of the two other “key” social enablers at different points of time during the initiative. Knowledge of such factors would allow organizations to allocate resources on communication and teamwork depending on the circumstances. The third direction, likely to be the most fruitful, would involve examining taken-for-granted assumptions that the “experience far” positivist literature on ERP implementation makes about the “subjective understanding” of the participants of the initiative [20]. The subjective understanding, in the instance of our study of MANCO, refers to how the observed human subjects (i.e. MANCO’s employees) phenomenologically experienced the ERP implementation (in contrast to how the existing literature models their experiences, based on characteristics imputed by researchers). In our study, we sought to test propositions from the literature on BPR/ERP implementation, much of which may be characterized as “positivist” due to the embedded objectivist assumptions and deterministic reasoning, and nomothetic methodological orientation. Evidence from the MANCO case validates the proposition that strong and committed leadership is a necessary condition for successful implementation, but refutes the propositions that open and honest communication is a necessary condition for success in implementation and that a balanced and empowered team is a necessary condition for success in implementation. Reading between the lines of the positivist BPR/ERP implementation literature, one can discern its presumption of rationalism as the basis on which people act. However, did the actors at MANCO actually see themselves as subscribing to and behaving according to a rationalistic, decision-making model? To address this question, a researcher would need to observe and interpretively “read” how the actors actually saw and understood themselves. In other words, the researcher would need to develop a new interpretive understanding, as called for by Lee in his framework for integrating positivist and interpretive approaches [20]. A clue is offered by the proposition that was validated and by the two that were refuted. The validated proposition is about leadership and the refuted propositions are about open and honest communication, and about a balanced and empowered team. As mentioned earlier, a hermeneutic reading of the BPR/ERP literature may reveal a presumption of rationalism: leadership is needed to straighten out any dysfunctional aspects of the organizational structure and business processes so that the ERP may be properly installed and configured; communication is needed so that this straightening out may occur seamlessly with all parties developing a shared understanding of the initiative and moving towards the mandated goals in a synchronized fashion; and a balanced and empowered team is needed to carry out this rational mandate by creating plans that would be agreeable/meaningful to all the different functional groups in the organization. However, a presumption of rationalism is but one possible presumption. Also possible is an alternative presumption of political, power-based, and other non-rational motivations: regardless of what rationalistic decision-making would dictate, leadership achieves the changes it desires (such as the implementation of ERP technology) either through charisma or through coercive power; communication is not necessarily needed; and a balanced and empowered team is not necessarily needed either.6 Indeed, the evidence in the MANCO case appears consistent with the non-rational/political model outlined in the preceding sentence. To formulate theoretical explanations based on non-rational/political assumptions, a researcher would need to revisit the MANCO case study database and/or re-interview the principals in the case, in order to examine whether the actors saw themselves and their setting in primarily a rationalistic way or primarily in a non-rational/political way, and to unearth what subjective meanings strong and committed leadership, open and honest communication, and balanced and empowered leadership had for the ERP project participants. This subjective understanding would then form the basis for the new theoretical propositions, which would be subject to empirical testing in other organizational contexts [20]. In conclusion, we would like to reiterate that ERP implementation is a complex IT-related social phenomenon, for which a large body of knowledge, consisting of substantial “folklore,” based on unexamined assumptions or without empirical basis, exists. This study takes a first step in separating myth from reality in the extensive literature available on ERP implementation and on information systems development in general.