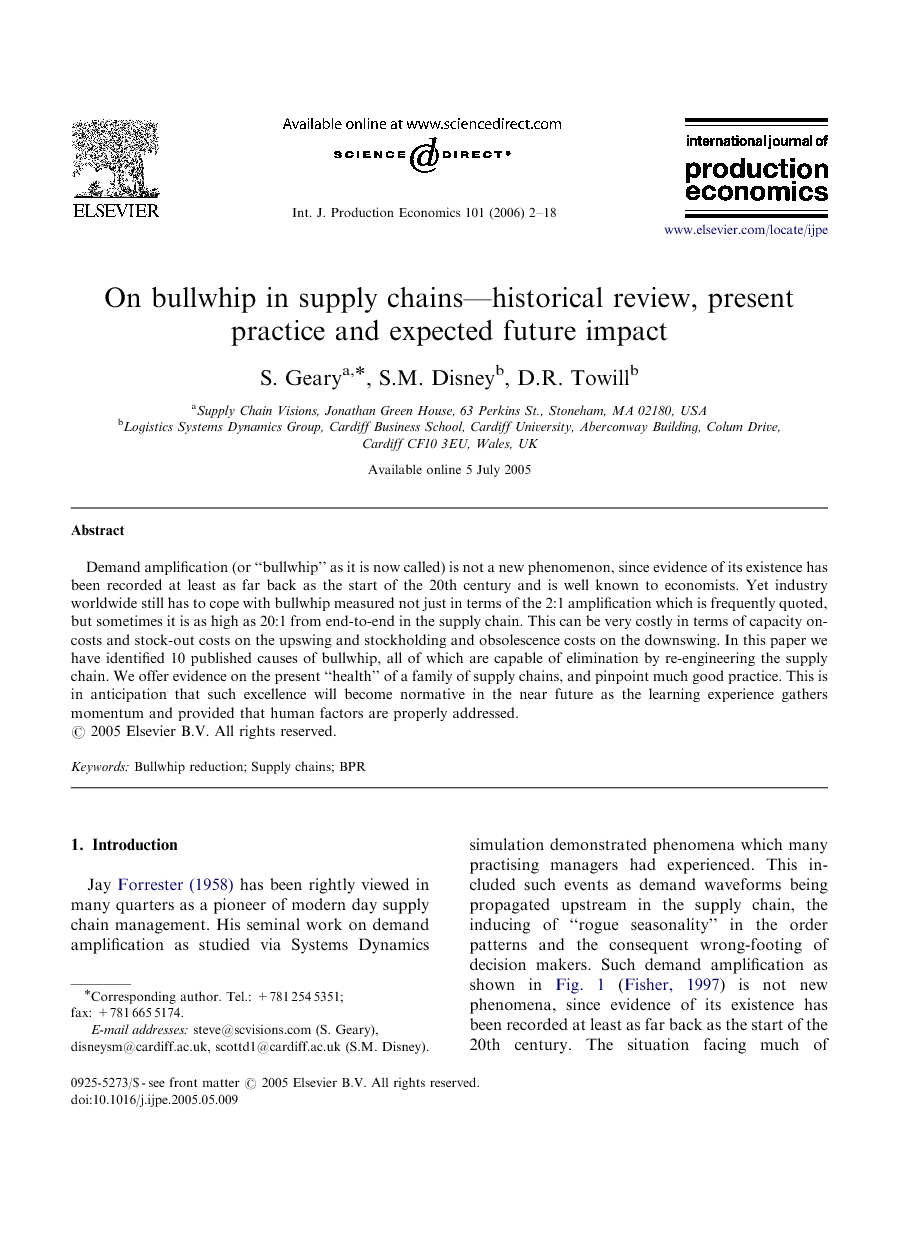 Demand amplification (or “bullwhip” as it is now called) is not a new phenomenon, since evidence of its existence has been recorded at least as far back as the start of the 20th century and is well known to economists. Yet industry worldwide still has to cope with bullwhip measured not just in terms of the 2:1 amplification which is frequently quoted, but sometimes it is as high as 20:1 from end-to-end in the supply chain. This can be very costly in terms of capacity on-costs and stock-out costs on the upswing and stockholding and obsolescence costs on the downswing. In this paper we have identified 10 published causes of bullwhip, all of which are capable of elimination by re-engineering the supply chain. We offer evidence on the present “health” of a family of supply chains, and pinpoint much good practice. This is in anticipation that such excellence will become normative in the near future as the learning experience gathers momentum and provided that human factors are properly addressed.

Jay Forrester (1958) has been rightly viewed in many quarters as a pioneer of modern day supply chain management. His seminal work on demand amplification as studied via Systems Dynamics simulation demonstrated phenomena which many practising managers had experienced. This included such events as demand waveforms being propagated upstream in the supply chain, the inducing of “rogue seasonality” in the order patterns and the consequent wrong-footing of decision makers. Such demand amplification as shown in Fig. 1 (Fisher, 1997) is not new phenomena, since evidence of its existence has been recorded at least as far back as the start of the 20th century. The situation facing much of industry worldwide is exacerbated because “bullwhip”, Lee et al. (1997), tends to be either misunderstood, or ignored (McCullen and Towill, 2002). Familiar arguments include that such “whiplash” behaviour (Hayes and Wheelwright, 1984) is someone else's problem, or it does not cost anything to this particular “player”, or it is an unavoidable fact of life. But industry, in the meantime, has to cope with bullwhip measured not just in terms of the frequently quoted 2:1 amplification which is bad enough, but 20:1 and even higher (Holmström, 1997). This behaviour can be very costly in terms of capacity on-costs and in stock-out costs (Metters, 1997). Equally, because there are consequential downturns in demand stock-holding and obsolescence costs will also increase.If effective supply chain management is now seen as a move towards “Swift and Even Material Flow” (Schmenner, 2001), then another major contributor to our present day understanding of bullwhip is Jack Burbidge, who during his lifetime was in turn an experienced production manager, consultant, and then a distinguished academic. Even prior to the “Japanisation” of much of US and European industry via the “Lean Thinking” Paradigm, he was arguing against the Economic Batch Quantity concept and in favour of the “Batch of One” supply (Burbidge, 1981). Hence, if we traditionally manufacture in large batches then his solution to queuing problems was to reduce these long set-up times, and aim for small batches as a way of life. So much so that even 40 years ago he was postulating “only to make in a week what you can use in a week”. In the present operating environment we would simply substitute “day, or even hour”, for “week”, and his “5 Rules for Avoiding Bankruptcy” would thus have an amazing relevance to modern pipeline controls. Historically the bullwhip problem has also been of considerable interest to economists via their study of trade cycles (Mitchell, 1923). In this context the little-known paper by Zymelman (1965) provided an interesting proposal to reduce bullwhip in the cotton industry via a control law he established via analogue simulation. Fortunately the writings of both Forrester and Burbidge considered a range of possible solutions to the bullwhip problem. These may have been brought together to form a coherent set of streamlined Material Flow Principles which have been termed the FORRIDGE approach. These have been shown to produce substantial industrial benefits, via studies of BPR Programmes. This improvement has been recorded despite the many barriers to change which may be encountered as the historically entrenched “functional silos” react to the holistic approach. More recently in a move to further improve on the FORRIDGE Principles bullwhip has become a topic for concurrent formal study. This has brought together a number of previously separate strands of research, namely OR (Lee et al., 1997), control theory (Disney and Towill, 2002) and filter theory (Dejonckheere et al., 2002). These topics underpin the essentially empirical studies of bullwhip via simulation (Forrester, 1958; van Ackere et al., 1993). In this paper, we shall demonstrate that these approaches can be brought together via simulation packages as their focal point, thus providing diagnostic tools and design guidelines which will assist supply chain designers. The methodology has been validated on industrial data which is representative of present day operations. But, because the framework is based on sound theoretical principles it can also be exploited to test the new supply configurations needed to underpin the era of mass customisation. In addition to our historical review, and illustrations from present industrial practice, we shall contemplate the future bullwhip scenario. This will involve assessing a wide range of impacting factors, and is far from being an IT issue alone. Our perceptions are based on over two decades spent by the current authors as analyst, synthesist, modeller, observer, auditor, change manager and implementer roles in real-world value streams. As output from this combined experience we posit that bullwhip is merely one phenomenon (amongst many) associated with poor material flow. Furthermore our actions are based on identification and eradication of root causes.

Bullwhip has a long tradition for causing disruptions and massive over-swings and under-swings in demand. The former results in quite unnecessary ramping up of production (usually tried at great speed with the generation of corresponding inefficiencies), and the latter necessitates much pain via paid idle time and possible redundancies. The on-costs incurred include “learning effects” for new labour on the upswing, and lay-off costs on the downswing. Because of this cyclical behaviour (well-known in economic circles as the boom-and-bust scenario), the stocks will also fluctuate out-of-phase with demand. So again on the upswing, there will be stock-outs, whilst on the downswing there will be excess stock with a tendency to incur obsolescence and to damage during excessive storage periods. So business is lost because the products are not available when required, and when they are available they are at a higher cost than need be. We have identified at least ten major causes of bullwhip. These are in part due to problems in our value-added processes, supplier difficulties, demand volatility, and control processes. A way forward is to re-engineer the supply chain to systematically remove all avoidable causes of uncertainty. This requires the effective application of business systems engineering principles involving technical, cultural, organisational, and financial aspects of the project. It is our view that the underlying themes during the execution of such BPR programmes are smooth material flow, smooth and transparent information flow, time compression of all processes, holistic controls and the abolition of all interfaces, especially those causing functional silos to exist. The consequence is a movement away from traditional, adversarial operations, towards the minimal bullwhip seamless supply chain scenario. In practical terms there appears to be little difficulty in thereby reducing real-world bullwhip by at least 50%. Our perception of future bullwhip lies not in revolutionary new supply chains. Instead we see the promulgation of the present established “exemplar” good practice which has demonstrated that our present knowledge of bullwhip causes can generate effective solutions to be matched to the particular needs of the individual value streams. This move from a few exemplars to a future scenario where their present day exceptional standards have become the new norm needs to be accelerated. But barring the path to such progress are a number of factors which lie outside the technical arena. By far the greatest of these is the elimination of the “functional silo” mentality and its replacement by a new era of interface management. Only then can we fully exploit the versatility of present day IT to improve supply chain competitiveness. This includes avoiding bullwhip on-costs by using proven designs to ensure smooth material flow as needed to satisfy the true demands of the marketplace. We heartily agree with a recent paper which argues that the first step must always be to implement the Time Compression Principle (de Treville et al., 2004) and hence reduce all lead times to their optimum value. It is also axiomatic that these new reduced targets must be consistently achieved if uncertainty is to be reduced.