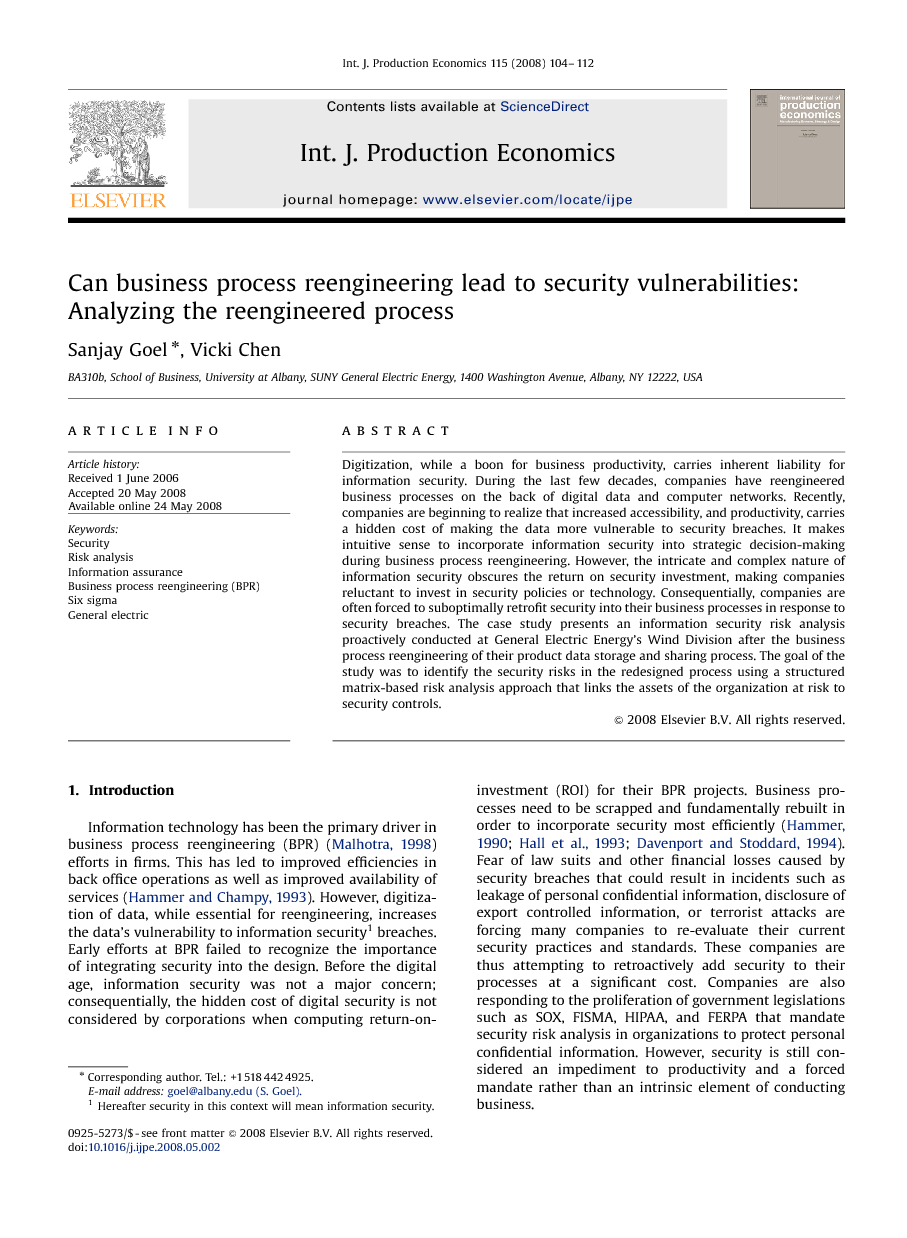 Information technology has been the primary driver in business process reengineering (BPR) (Malhotra, 1998) efforts in firms. This has led to improved efficiencies in back office operations as well as improved availability of services (Hammer and Champy, 1993). However, digitization of data, while essential for reengineering, increases the data's vulnerability to information security1 breaches. Early efforts at BPR failed to recognize the importance of integrating security into the design. Before the digital age, information security was not a major concern; consequentially, the hidden cost of digital security is not considered by corporations when computing return-on-investment (ROI) for their BPR projects. Business processes need to be scrapped and fundamentally rebuilt in order to incorporate security most efficiently (Hammer, 1990; Hall et al., 1993; Davenport and Stoddard, 1994). Fear of law suits and other financial losses caused by security breaches that could result in incidents such as leakage of personal confidential information, disclosure of export controlled information, or terrorist attacks are forcing many companies to re-evaluate their current security practices and standards. These companies are thus attempting to retroactively add security to their processes at a significant cost. Companies are also responding to the proliferation of government legislations such as SOX, FISMA, HIPAA, and FERPA that mandate security risk analysis in organizations to protect personal confidential information. However, security is still considered an impediment to productivity and a forced mandate rather than an intrinsic element of conducting business. Faced with ever changing threats and possible solutions, managers struggle to make security decisions. They analyze risks routinely in their activities; however, they may be unable to comprehend the security problem due to its complexity. Comprehensive security risk analysis involves assessing the dependencies between assets, vulnerabilities, threats, and controls (Goel and Chen, 2005). As the number of parameters grows in each of these categories, the combinatorial complexity increases rapidly. Given the limits of human cognitive ability (Miller, 1956), even smaller information security risk problems contain enough parameters that managers find these problems difficult to grasp. Consequently, it is imperative to use cognitive aids while analyzing security risks. The goal of security risk management is to institute controls that mitigate risks to acceptable levels. Several techniques for analyzing security risks have been proposed. These techniques assist in prioritizing the deployment of controls based on the value of assets at risk. Most of the classical risk analysis techniques however are quantitative (Ozier, 1989; Vose, 2000; Littlewood et al., 1992), firmly rooted in reliability theory (Aven, 1992; Andrews and Moss, 1993) or probability theory (Mosleh et al., 1985; Schneier, 1999; Sahinoglu, 2005). They typically require probabilities of events and values of assets at risk to compute the exposure of the organization. They also need values for effectiveness of controls. Given changing assets, evolving threats, and rapidly emerging vulnerabilities, it is infeasible to accurately estimate these values, making quantitative methods an impractical approach for large-scale security risk analysis. On the other hand, very few qualitative techniques (Baskerville, 1993) are available. These techniques rely on relative comparisons and expert judgment in making security decisions. In some of the earliest work on security risk analysis, analysts have relied on checklists developed from industry standards or government mandates to estimate risk. Auditors (Krauss, 1972 and Krauss, 1980) commonly apply such checklists even today to ensure compliance with accepted industry practice. Fuzzy sets and possibility theory have also been considered for computing risks (Baskerville and Portougal, 2003; Zadeh, 1965 and Zadeh, 1978; Dubois and Prade, 2001). Though such techniques provide more latitude in collecting data, it is still hard to obtain suitable data for risk modeling. Contrary to general perception, security is not a purely technical decision; rather, it is a financial assessment where security investments should be commensurate with the value of assets at risk. Computing precise valuations of controls and security risk exposure involves detailed quantitative analysis, requiring probabilities of threats, valuation of assets, and effectiveness coefficients for controls. Such information is sparse and typically unreliable in practice. Several security management tools have been developed including OCTAVE (Alberts and Dorofee, 2003), CCTA/CRAMM (Barber and Davey, 1992; CCTA, 1991 and CCTA, 1993), CORAS (Stølen et al., 2002; Dimitrakos et al., 2002), and Stride (Casteele, 2004). These tools integrate multiple techniques that are woven together into a monolithic user interface. However, they are quite cumbersome to use and are typically black boxes to risk analysts which makes it difficult for them to incorporate intuitive judgment during analysis. Given the uncertainty in risk analysis, it is important to couple human judgment with analytic methods. An alternate matrix-based approach for risk analysis is suggested by Goel and Chen (2005) in which relative rankings of asset valuation, level of vulnerability, chances of manifestation of threat, and effectiveness of controls are aggregated to determine the appropriate set of controls. In this approach information is compactly organized into a cascading series of matrices that makes comprehension easier. In addition, the approach ensures transparency of data, thereby allowing analysts to isolate the importance of each asset, vulnerability, threat, and control by navigating through the matrices. The valuations and decisions on selecting controls are then made by experts who use their qualitatively judgment. This paper briefly discusses the methodology and its application in a case study conducted at General Electric (GE) Energy Wind Division case study. The rest of this paper is organized as follows: Section 2 summarizes the matrix-based risk analysis methodology; Section 3 presents the case study; Section 4 discusses observations, and Section 5 contains concluding remarks.

This study highlights how large global corporations with distributed sites can reengineer processes while addressing security needs through a process of security risk analysis that considers the concerns of a diverse group of stakeholders. This study shows that different departments have different conceptions about security requirements; while contemplating security updates for business processes, managers should take into consideration inputs from various departments. Security is a key success factor in BPR and if not considered will lead to failures over time. This study presents the use of a matrix-based risk analysis tool that allows security issues to be dissected into primitive elements, which can then be aggregated and examined in the context of organizational assets and risks. Such rigor and due diligence is essential to eliminate error or oversight in the redesigned process that could negatively affect corporate security. The tool described here is not a black box that provides a solution, but rather an interactive tool that provides decision makers with a comprehensive summary of security risk information that they can then use while making security decisions. In the digitized age, BPR is not only IT's or the security managers’ concern, but also the responsibility of end users and functional owners in order to ensure a truly robust final solution. The right decisions will help lead businesses to successful products and sustained profits.2