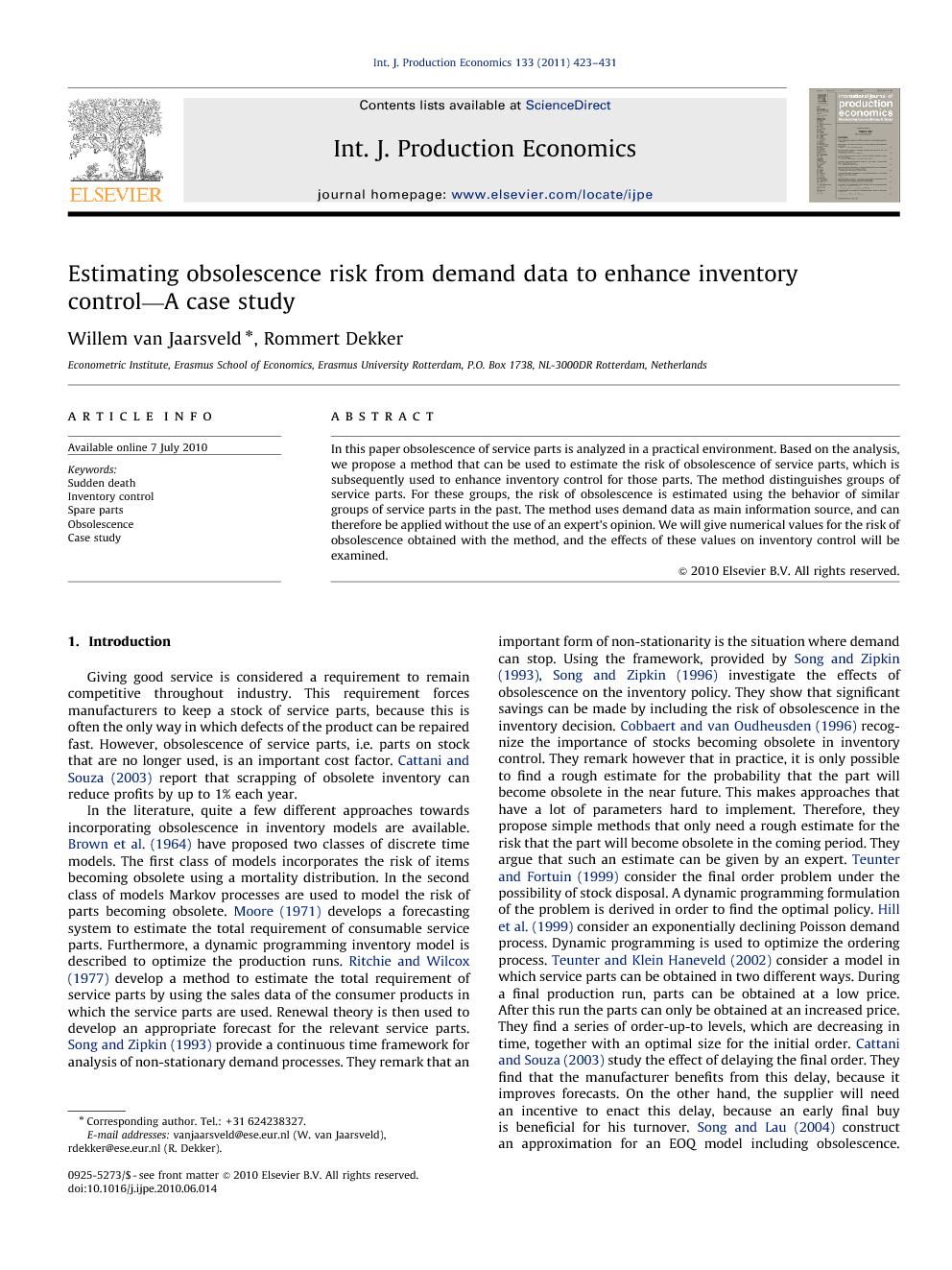 Giving good service is considered a requirement to remain competitive throughout industry. This requirement forces manufacturers to keep a stock of service parts, because this is often the only way in which defects of the product can be repaired fast. However, obsolescence of service parts, i.e. parts on stock that are no longer used, is an important cost factor. Cattani and Souza (2003) report that scrapping of obsolete inventory can reduce profits by up to 1% each year. In the literature, quite a few different approaches towards incorporating obsolescence in inventory models are available. Brown et al. (1964) have proposed two classes of discrete time models. The first class of models incorporates the risk of items becoming obsolete using a mortality distribution. In the second class of models Markov processes are used to model the risk of parts becoming obsolete. Moore (1971) develops a forecasting system to estimate the total requirement of consumable service parts. Furthermore, a dynamic programming inventory model is described to optimize the production runs. Ritchie and Wilcox (1977) develop a method to estimate the total requirement of service parts by using the sales data of the consumer products in which the service parts are used. Renewal theory is then used to develop an appropriate forecast for the relevant service parts. Song and Zipkin (1993) provide a continuous time framework for analysis of non-stationary demand processes. They remark that an important form of non-stationarity is the situation where demand can stop. Using the framework, provided by Song and Zipkin (1993), Song and Zipkin (1996) investigate the effects of obsolescence on the inventory policy. They show that significant savings can be made by including the risk of obsolescence in the inventory decision. Cobbaert and van Oudheusden (1996) recognize the importance of stocks becoming obsolete in inventory control. They remark however that in practice, it is only possible to find a rough estimate for the probability that the part will become obsolete in the near future. This makes approaches that have a lot of parameters hard to implement. Therefore, they propose simple methods that only need a rough estimate for the risk that the part will become obsolete in the coming period. They argue that such an estimate can be given by an expert. Teunter and Fortuin (1999) consider the final order problem under the possibility of stock disposal. A dynamic programming formulation of the problem is derived in order to find the optimal policy. Hill et al. (1999) consider an exponentially declining Poisson demand process. Dynamic programming is used to optimize the ordering process. Teunter and Klein Haneveld (2002) consider a model in which service parts can be obtained in two different ways. During a final production run, parts can be obtained at a low price. After this run the parts can only be obtained at an increased price. They find a series of order-up-to levels, which are decreasing in time, together with an optimal size for the initial order. Cattani and Souza (2003) study the effect of delaying the final order. They find that the manufacturer benefits from this delay, because it improves forecasts. On the other hand, the supplier will need an incentive to enact this delay, because an early final buy is beneficial for his turnover. Song and Lau (2004) construct an approximation for an EOQ model including obsolescence. The proposed solution relies on dynamic programming. Furthermore, their method requires sophisticated knowledge regarding the distribution of the time at which the part becomes obsolete. The problem of determining the final order quantity of repairable service parts is considered by van Kooten and Tan (2009). The parts cannot always be repaired, for they are sometimes condemned. The problem is modelled as a transient Markov chain. Also, an approximate model is presented that allows for more efficient calculations. Managerial insights are developed, and a sensitivity analysis is performed. Pinçe and Dekker (2009) study a model in which it is known in advance that a significant demand decrease will occur, which will cause the optimal reorder-point to decrease. Because it is assumed that only demand can take away the excess stocks resulting from this change in control policy, the shift in control is initiated before the shift in demand occurs. They derive a method to approximately determine the optimal time to shift to the new control policy. We study an original equipment manufacturer (OEM) for which obsolescence of service parts causes problems. We concentrate on the main practical issue: quantification of the so-called risk of obsolescence. To our best knowledge, methods to estimate this risk are not available in the literature, as in the literature it is assumed that the parameters governing the process in which the part becomes obsolete are known or can be estimated by an expert. This lack of methods to estimate the obsolescence risk hampers application of models including obsolescence. The demand model on which we will concentrate is relatively simple; we use a so-called sudden death demand model with an exponentially distributed demand lifetime. For this model we describe a method that can be used to estimate the expectation of the demand lifetime using demand data. The remainder of this paper is organized as follows. In Section 2, we will make qualitative observations of the obsolescence problem at the company. This discussion will serve as the primary motivation for our method. In Section 3, we give further motivation for the method by analyzing demand data of service parts. In Section 4, we give an extensive modelling discussion. We then describe the method, and give ideas on how it was implemented. In Section 5 we will draw conclusions, and give suggestions for future research.

We have presented a method that can be used to estimate the risk of obsolescence using demand data. The method is based upon observations in the demand data of service parts that are used in products with a long life cycle. In principle, the method can be applied by any company with sufficient data for a sufficient number of parts, and products with long life cycles. However, more research is needed to find out if other companies have similar demand patterns for service parts. In particular, it would be interesting to find out whether a similar analysis as the one used in Section 3 gives similar results at other companies, in the sense that the number of parts in each group that have zero demand in the second period exceed the number of parts that should have zero demand according to the Poisson model. The method was implemented at the company, and the resulting order suggestions were in general followed by the inventory controllers. It would be interesting to extend the method to Markov models with more than two states, examples of which are considered by Song and Zipkin (1996). While this allows us to model demand increases as well as decreases, multiple states will greatly complicate the estimation of the model parameters from the demand data. The theory of hidden Markov models (see, e.g. Rabiner, 1988) might prove useful in this respect.