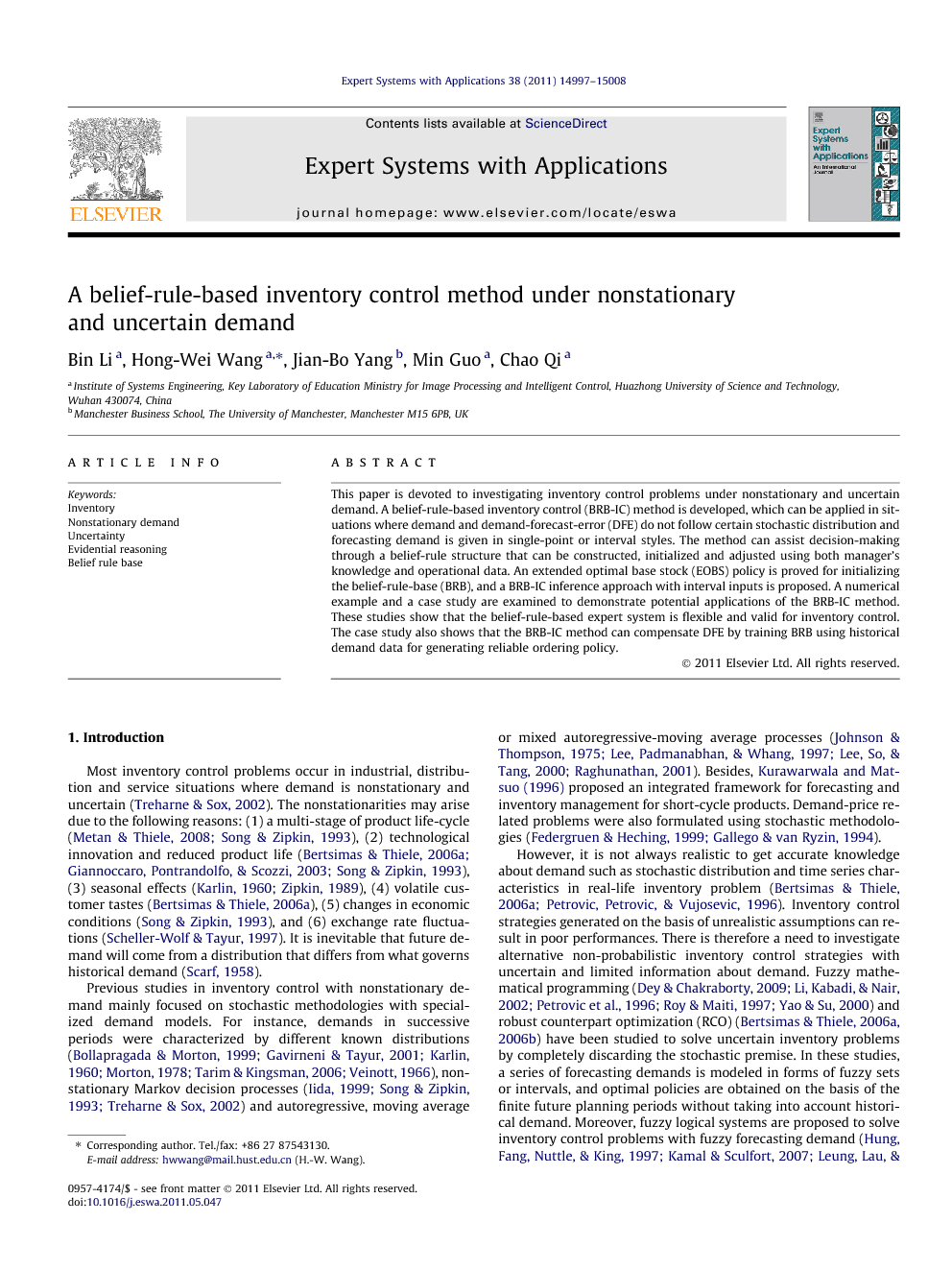 This paper is devoted to investigating inventory control problems under nonstationary and uncertain demand. A belief-rule-based inventory control (BRB-IC) method is developed, which can be applied in situations where demand and demand-forecast-error (DFE) do not follow certain stochastic distribution and forecasting demand is given in single-point or interval styles. The method can assist decision-making through a belief-rule structure that can be constructed, initialized and adjusted using both manager’s knowledge and operational data. An extended optimal base stock (EOBS) policy is proved for initializing the belief-rule-base (BRB), and a BRB-IC inference approach with interval inputs is proposed. A numerical example and a case study are examined to demonstrate potential applications of the BRB-IC method. These studies show that the belief-rule-based expert system is flexible and valid for inventory control. The case study also shows that the BRB-IC method can compensate DFE by training BRB using historical demand data for generating reliable ordering policy.

Most inventory control problems occur in industrial, distribution and service situations where demand is nonstationary and uncertain (Treharne & Sox, 2002). The nonstationarities may arise due to the following reasons: (1) a multi-stage of product life-cycle (Metan and Thiele, 2008 and Song and Zipkin, 1993), (2) technological innovation and reduced product life (Bertsimas and Thiele, 2006a, Giannoccaro et al., 2003 and Song and Zipkin, 1993), (3) seasonal effects (Karlin, 1960 and Zipkin, 1989), (4) volatile customer tastes (Bertsimas & Thiele, 2006a), (5) changes in economic conditions (Song & Zipkin, 1993), and (6) exchange rate fluctuations (Scheller-Wolf & Tayur, 1997). It is inevitable that future demand will come from a distribution that differs from what governs historical demand (Scarf, 1958). Previous studies in inventory control with nonstationary demand mainly focused on stochastic methodologies with specialized demand models. For instance, demands in successive periods were characterized by different known distributions (Bollapragada and Morton, 1999, Gavirneni and Tayur, 2001, Karlin, 1960, Morton, 1978, Tarim and Kingsman, 2006 and Veinott, 1966), nonstationary Markov decision processes (Iida, 1999, Song and Zipkin, 1993 and Treharne and Sox, 2002) and autoregressive, moving average or mixed autoregressive-moving average processes (Johnson and Thompson, 1975, Lee et al., 1997, Lee et al., 2000 and Raghunathan, 2001). Besides, Kurawarwala and Matsuo (1996) proposed an integrated framework for forecasting and inventory management for short-cycle products. Demand-price related problems were also formulated using stochastic methodologies (Federgruen and Heching, 1999 and Gallego and van Ryzin, 1994). However, it is not always realistic to get accurate knowledge about demand such as stochastic distribution and time series characteristics in real-life inventory problem (Bertsimas and Thiele, 2006a and Petrovic et al., 1996). Inventory control strategies generated on the basis of unrealistic assumptions can result in poor performances. There is therefore a need to investigate alternative non-probabilistic inventory control strategies with uncertain and limited information about demand. Fuzzy mathematical programming (Dey and Chakraborty, 2009, Li et al., 2002, Petrovic et al., 1996, Roy and Maiti, 1997 and Yao and Su, 2000) and robust counterpart optimization (RCO) (Bertsimas and Thiele, 2006a and Bertsimas and Thiele, 2006b) have been studied to solve uncertain inventory problems by completely discarding the stochastic premise. In these studies, a series of forecasting demands is modeled in forms of fuzzy sets or intervals, and optimal policies are obtained on the basis of the finite future planning periods without taking into account historical demand. Moreover, fuzzy logical systems are proposed to solve inventory control problems with fuzzy forecasting demand (Hung et al., 1997, Kamal and Sculfort, 2007 and Leung et al., 2003), but the fuzzy rules reported in the literature are set by only taking into account qualitative expert knowledge without considering quantitative expert knowledge and historical demand. Another traditional approximation approach is to transform uncertain forecasting demand into single-point value based on the manager’s knowledge and preferences (Gen, Tsujimura, & Zheng, 1997), then use stochastic approximation to generate “optimal” inventory control policies. This approach does not take full account of demand uncertainty, so the derived “optimal” policies can be hardly reliable. Besides the nonstationary and uncertain concerns, most of the models are based on a definite planning horizon into the future, which results in that the order quantity for the forthcoming period can be significantly affected by forecasts for distant periods. However, the forecasting for distant periods is hardly reliable (Mellichamp & Love, 1978). Based on these considerations, we propose a belief-rule-based inventory control (BRB-IC) method according to current inventory, historical demand data and necessary short-term forecasting demand. The method is developed from the decision support mechanism of belief-rule-based inference methodology – RIMER (Yang et al., 2006 and Yang et al., 2007) which is derived on the basis of evidential reasoning (ER) approach (Yang, 2001, Yang and Sen, 1994, Yang and Singh, 1994, Yang and Xu, 2002a and Yang and Xu, 2002b) and rule-based expert system. RIMER is a modeling and inference scheme under uncertainty with a belief-rule structure. It has been applied to graphite content detection (Yang et al., 2006 and Yang et al., 2007), pipeline leak detection (Chen et al., 2011, Xu et al., 2007, Zhou et al., 2011 and Zhou et al., 2009), clinical guideline (Kong, Xu, Liu, & Yang, 2009), nuclear safeguards evaluation (Liu, Ruan, Wang, & Martinez, 2009), consumer preference prediction (Wang, Yang, Xu, & Chin, 2009), new product development (Tang, Yang, Chin, Wong, & Liu, 2011), system reliability prediction (Hu, Si, & Yang, 2010), and gyroscopic drift prediction (Si, Hu, Yang, & Zhang, 2011). The BRB-IC method provides a transparent knowledge-based framework for inventory control, and can handle various kinds of uncertain information. It enables experts and decision-makers (DMs) to intervene the construction and updating of the belief-rule-base (BRB) using their judgmental knowledge. The method is easy to understand and implement and requires little computational efforts. The paper is organized as follows: In Section 2, the basic model formulations for backorder and lost sales cases are briefly described. In Section 3, the BRB-IC method is described in terms of information transformation in ER framework, constructing BRB, initializing BRB, BRB-IC inference approaches and training BRB. In Section 4, a numerical example and a case study are examined to demonstrate potential applications of the BRB-IC method. The paper is concluded in Section 5.

In order to deal with inventory control problems under nonstationary and uncertain demand, a BRB-IC method was proposed in this paper. Unlike traditional methods that make ordering policies based on a definite planning horizon into the future whose resulting order quantity for the forthcoming period can be significantly affected by unreliable forecasts for distant periods, the BRB-IC method makes policies according to current inventory, historical demand data and necessary short-term forecasting demand. The method is developed from the decision support mechanism of belief-rule-based inference methodology – RIMER. Belief rules in the BRB-IC model can be seen as certain pivotal ordering policies. There are five essential components in the BRB-IC model, including information transformation, constructing BRB, initializing BRB, BRB-IC inference and training BRB. Specially, an extended optimal base stock (EOBS) policy, which can be used to initialize the BRB, was proven under the assumption that forecasting demand is given in single-point style and DFE follows certain stochastic distribution, and also a BRB-IC inference approach with interval inputs was proposed. This BRB-IC method was validated and shown to be feasible through an example and a case study. The BRB-IC method has several unique features. Firstly, it can to some extent overcome the drawback of information distortion caused by using stochastic theory alone to approximate real situations. Secondly, it can represent and handle various types of uncertain information such as interval demand data that may emerge in inventory control processes. Thirdly, it can capture complicated and continuous casual and nonlinear relationships. Fourthly, it provides an inventory control model, which is easy to understand and implement. It can incorporate human knowledge and risk preferences, and allows experts to construct and update the structure and parameters using their judgmental knowledge. Fifthly, belief rules can be trained using historical demand information and can compensate the DFE to induce reliable ordering policy. However, the review period and lead time are assumed to be constant in this paper. In reality, they are usually variable, especially the lead time. Besides, only the parameters of the BRB are identified in this paper. If the nonstationary demand with significant change makes the referential evaluations of belief-rules’ antecedents do not fit the hidden pattern, the BRB model should be constructed with variant structure. These limitations need to be investigated in future studies.