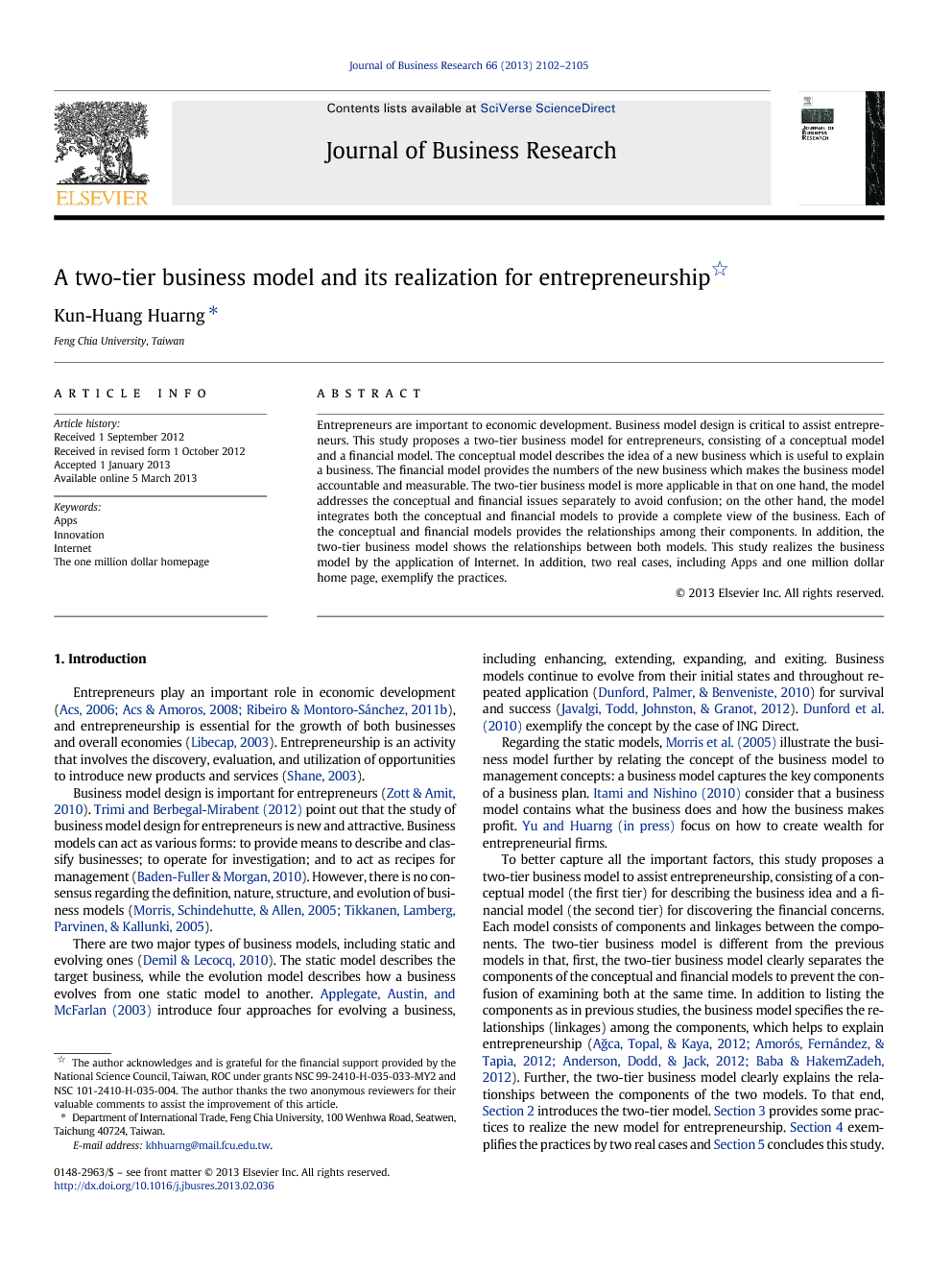 Entrepreneurs play an important role in economic development (Acs, 2006, Acs and Amoros, 2008 and Ribeiro and Montoro-Sánchez, 2011b), and entrepreneurship is essential for the growth of both businesses and overall economies (Libecap, 2003). Entrepreneurship is an activity that involves the discovery, evaluation, and utilization of opportunities to introduce new products and services (Shane, 2003). Business model design is important for entrepreneurs (Zott & Amit, 2010). Trimi and Berbegal-Mirabent (2012) point out that the study of business model design for entrepreneurs is new and attractive. Business models can act as various forms: to provide means to describe and classify businesses; to operate for investigation; and to act as recipes for management (Baden-Fuller & Morgan, 2010). However, there is no consensus regarding the definition, nature, structure, and evolution of business models (Morris et al., 2005 and Tikkanen et al., 2005). There are two major types of business models, including static and evolving ones (Demil & Lecocq, 2010). The static model describes the target business, while the evolution model describes how a business evolves from one static model to another. Applegate, Austin, and McFarlan (2003) introduce four approaches for evolving a business, including enhancing, extending, expanding, and exiting. Business models continue to evolve from their initial states and throughout repeated application (Dunford, Palmer, & Benveniste, 2010) for survival and success (Javalgi, Todd, Johnston, & Granot, 2012). Dunford et al. (2010) exemplify the concept by the case of ING Direct. Regarding the static models, Morris et al. (2005) illustrate the business model further by relating the concept of the business model to management concepts: a business model captures the key components of a business plan. Itami and Nishino (2010) consider that a business model contains what the business does and how the business makes profit. Yu and Huarng (in press) focus on how to create wealth for entrepreneurial firms. To better capture all the important factors, this study proposes a two-tier business model to assist entrepreneurship, consisting of a conceptual model (the first tier) for describing the business idea and a financial model (the second tier) for discovering the financial concerns. Each model consists of components and linkages between the components. The two-tier business model is different from the previous models in that, first, the two-tier business model clearly separates the components of the conceptual and financial models to prevent the confusion of examining both at the same time. In addition to listing the components as in previous studies, the business model specifies the relationships (linkages) among the components, which helps to explain entrepreneurship (Ağca et al., 2012, Amorós et al., 2012, Anderson et al., 2012 and Baba and HakemZadeh, 2012). Further, the two-tier business model clearly explains the relationships between the components of the two models. To that end, Section 2 introduces the two-tier model. Section 3 provides some practices to realize the new model for entrepreneurship. Section 4 exemplifies the practices by two real cases and Section 5 concludes this study.