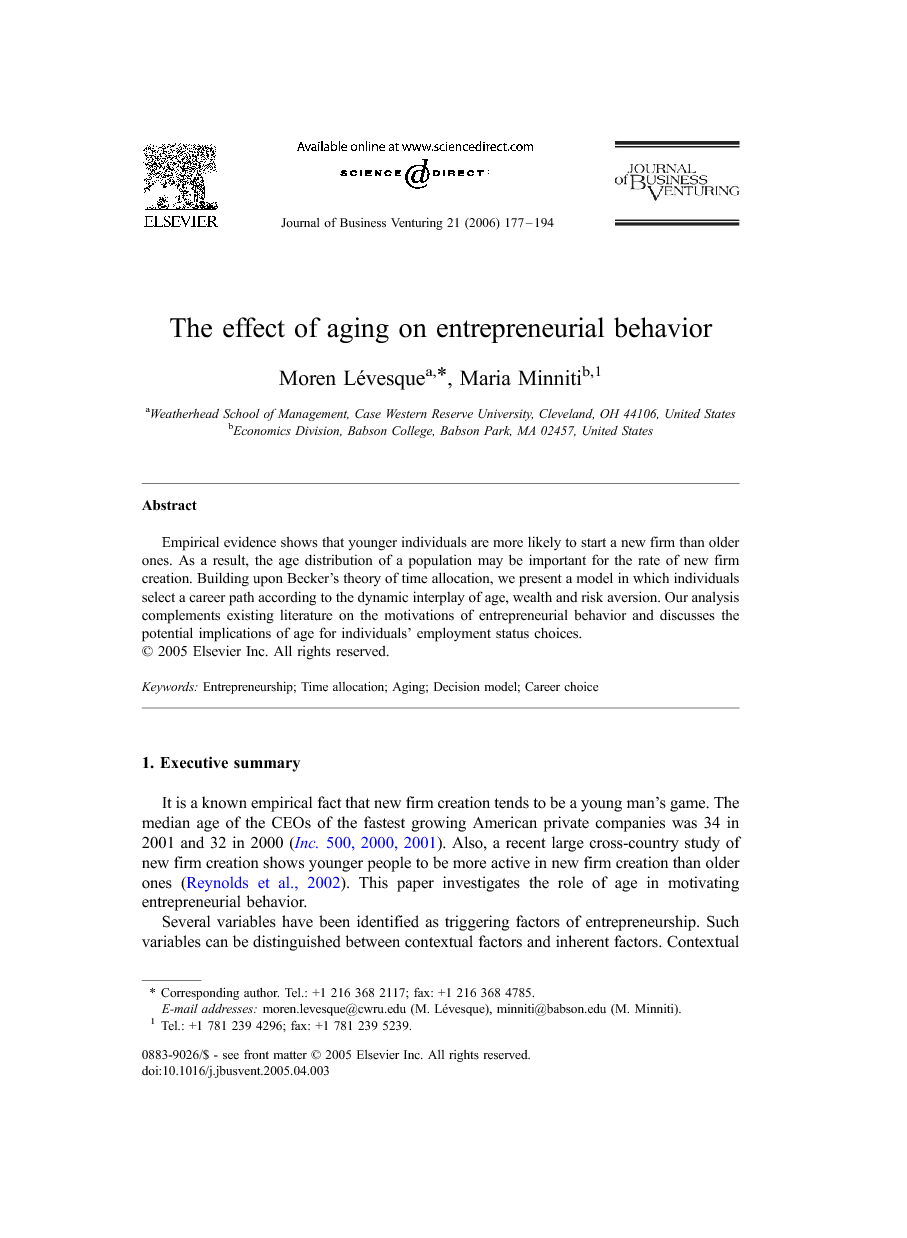 Empirical evidence shows that younger individuals are more likely to start a new firm than older ones. As a result, the age distribution of a population may be important for the rate of new firm creation. Building upon Becker's theory of time allocation, we present a model in which individuals select a career path according to the dynamic interplay of age, wealth and risk aversion. Our analysis complements existing literature on the motivations of entrepreneurial behavior and discusses the potential implications of age for individuals' employment status choices.

Recent research on new firm creation shows that entrepreneurial behavior is, to a large extent, an embedded phenomenon and that most of its triggering factors and their relative importance depend on contextual circumstances and may vary significantly in intensity across locations. Jack and Anderson (2002) argue that new firm creation is not merely an economic process but draws from the social context which shapes and forms entrepreneurial outcomes. Chell and Baines (2000) find that the information and resources gathered by being embedded compensate for environmental constraints and, as a result, facilitate the entrepreneurial process. A recent large study of entrepreneurial behavior across countries suggests that individuals' decisions with respect to new firm creation are mainly the result of social norms and economic constraints and are, therefore, strongly dependent on a country's contextual conditions (Reynolds et al., 2002). Similarly, Birley argues that “there is no dichotomy between entrepreneurs and non-entrepreneurs; with the right stimulus, the most unexpected people can become entrepreneurs” (Wright, 2001: 37–38). For any individual, the entrepreneurial contextual conditions consist of the set of binding constraints that are a function of her socio-economic circumstances. The study of contextual factors influencing entrepreneurial behavior has received a good deal of attention (e.g., Miller, 1983). Triggering factors related to external conditions such as the availability of financing, education, labor markets, and quality of existing infrastructure, have all been shown to be important. Among others, Evans and Jovanovic (1989), Evans and Leighton (1989), and Kihlstrom and Laffont (1979) discuss the importance of financial resources and constraints on entrepreneurial decisions. Iyigun and Owen (1998), and Murphy et al. (1991) talk about the optimal allocation of human resources. Gromb and Scharfstein (2002) and Hamilton (2000) discuss the interdependence between entrepreneurial decisions and conditions in the labor market. Gompers and Lerner (2001), and Lerner and Gompers (2001) concentrate on new firm creation and the availability of venture capital. Amit et al. (1995) focus on individuals' opportunity costs while choosing between alternative income producing activities. The complementarities between many of these works draw attention to the fact that the entrepreneurial process is a multi-layered and complex phenomenon and that understanding the sequence of actions required to start a new firm is, to a large extent, contingent upon the context in which they are taken. Entrepreneurial decisions, however, are also influenced by some triggering factors that are not contingent upon their socio-economic environment but are, instead, intrinsic characteristics of the individual. Their study has focused, so far, on psychological traits of the person. Specifically, the existence of inherent factors of entrepreneurial behavior has been related to the presence of intentionality and locus of control, tolerance for risk and ambiguity, and to previous experiences. An increasing number of scholars agree that opportunity recognition represents the most distinctive and fundamental entrepreneurial behavior (Stevenson and Jarillo, 1990 and Venkataraman, 1997). In fact, there is wide agreement that entrepreneurs are individuals who are more likely than others to be “alert” to the identification and exploitation of profit opportunities (Kirzner, 1973, Schumpeter, 1934 and Shane and Venkataraman, 2000). Starting a new firm is an intentional act that involves repeated attempts to exercise control over the process in order to achieve the desired outcome (Gartner, 1985 and Shaver et al., 2001). Harper (1998), for example, argues that an internal locus of control increases entrepreneurial alertness and, therefore, leads to the creation of more new firms. Gaglio and Katz (2001), instead, take a cognitive psychology approach and suggest the existence of a “schema” of entrepreneurial alertness. Chase and Simon (1973) suggest that differences in decisions and performances between alert and non-alert individuals can be traced back to differences in schema content. Begley and Boyd (1987) and Minniti (2004) discuss individuals' tolerance toward ambiguity. Cooper et al. (1989) and Otani (1996) concentrate on prior experience in determining employment status choices. Finally, Leazar (2002) argues that entrepreneurs are jacks-of-all-trades who may not excel at any one skill but are competent in many, and links entrepreneurial decisions to the previous work experiences of the entrepreneur.2 Alertness, tolerance for ambiguity, previous experience and risk aversion, are all characteristics of the individual. They cannot be easily changed by exogenous interventions such as, for example, government policies. While the latter can alter an individual's incentives, inherent factors depend on her specific history. They are path dependent and, as a result, do not change or change very slowly. We argue that the effect of age on entrepreneurial decisions is analogous to that of an inherent factor. In other words, we argue that age influences an individual's decisions with respect to entrepreneurship in ways that are related to perceptions of self-efficacy and that do not depend on socio-economic incentives. Although age changes along with time, to alter the way in which individuals of different age brackets think about themselves and their role in society takes a long time.

The purpose of our paper is to understand why the percentage of individuals attempting the creation of new firms is highest among people between the ages of 25 and 35 and to highlight the important theoretical and practical implications of this phenomenon for entrepreneurial activity. When considering employment status choice, younger individuals are more likely to start a new firm than older individuals. We argue that this is the result of an age effect which, every thing else being the same, reduces the relative return to entrepreneurship as individuals become older. Individuals divide their time between income producing activities and leisure. For each age, there exists an individual specific allocation of time between work and leisure that maximizes that individual's expected utility. If an individual is employed in waged labor, she receives income at the time in which she performs that activity. If an individual allocates time to starting a new firm, instead, she does not receive income instantaneously, but a stream of future returns. As they get older, individuals allocate relatively more time to waged labor and relatively less time to new firm creation. This is the case because the discount attached to each dollar of future income increases as the individual gets older and, as a result, activities requiring a time commitment before becoming income producing, such as a new firm, are penalized with respect to activities with immediate payoffs such as waged labor. Our paper contributes to the literature on the origins and causes of new firm creation both at a microeconomic and macroeconomic level. At the microeconomic level, our paper presents a simple model of employment status choice, in which age, risk aversion and wealth, are shown to be important determinants of an individual's choice of whether or not to become an entrepreneur. In this context, our model provides a construct that can be modified to incorporate other factors or different functional forms and, as a result, can be used to study the relative importance of various variables. The sensitivity analysis presented in Table 1 is an example of such a study in which the relative effects of various triggering factors are analyzed. At the macroeconomic level, our model contributes to our understanding of the relationship between individuals' entrepreneurial behavior and aggregate entrepreneurial activity. Desirable theoretical extensions of this work could include the development of a micro-based aggregate model of entrepreneurial activity. In such a model, the subjective utility maximization problem presented in this paper could be expanded and applied to groups of individuals with heterogeneous characteristics. The distribution of characteristics, which would include age, could be altered across individuals in the same groups and across groups. For each group so constructed, the distribution of characteristics would allow the aggregate level of entrepreneurial activity to emerge as the unintended consequence of the dynamism generated in the economy by individuals' decisions and interactions. Consistent with the recent literature on endogenous growth, such a model would prove useful for the study of how economic growth, traditionally attributed to the behavior of large companies and the public sector, is also dependent on the number of new small firms and, in particular, on their ability to innovate and play the rabbit after which the rest of the economy chases.