عنوان انگلیسی
“I think I can, I think I can”: Overconfidence and entrepreneurial behavior
دانلود فوری مقاله + سفارش ترجمه 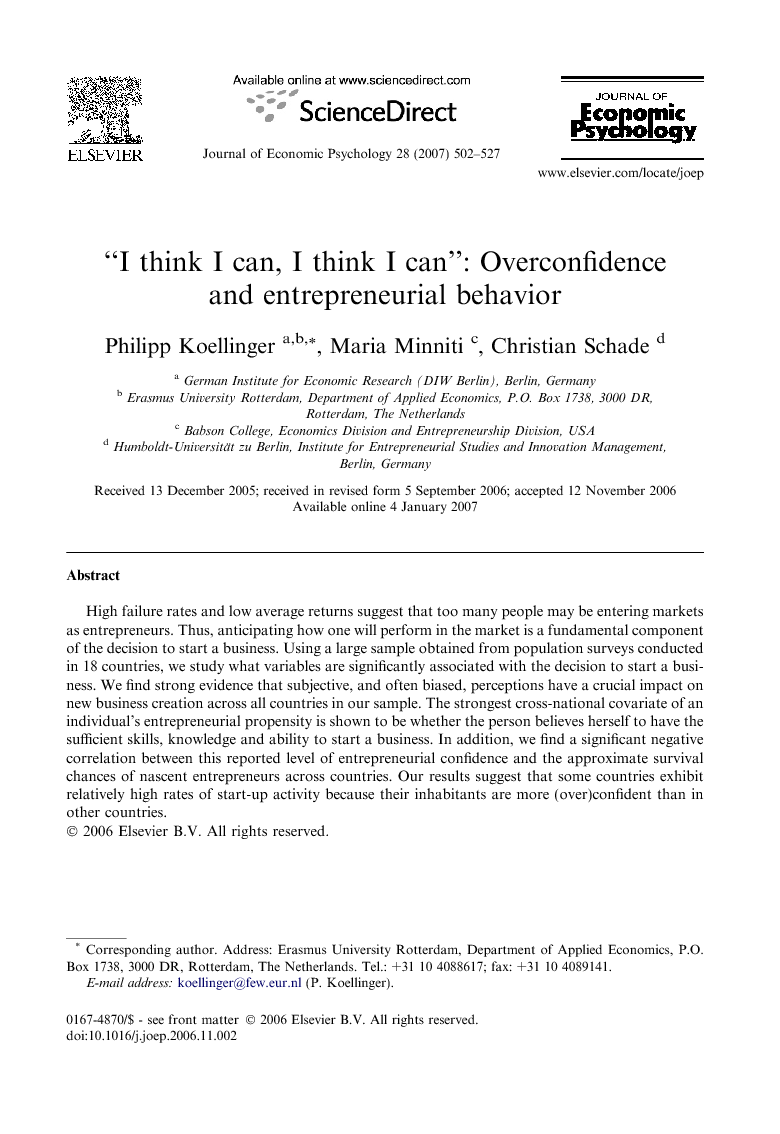 High failure rates and low average returns suggest that too many people may be entering markets as entrepreneurs. Thus, anticipating how one will perform in the market is a fundamental component of the decision to start a business. Using a large sample obtained from population surveys conducted in 18 countries, we study what variables are significantly associated with the decision to start a business. We find strong evidence that subjective, and often biased, perceptions have a crucial impact on new business creation across all countries in our sample. The strongest cross-national covariate of an individual’s entrepreneurial propensity is shown to be whether the person believes herself to have the sufficient skills, knowledge and ability to start a business. In addition, we find a significant negative correlation between this reported level of entrepreneurial confidence and the approximate survival chances of nascent entrepreneurs across countries. Our results suggest that some countries exhibit relatively high rates of start-up activity because their inhabitants are more (over)confident than in other countries.

Many new businesses fail shortly after inception (Baldwin, 1995 and Dunne et al., 1988), and entrepreneurship is a career choice that does not pay on average. Hamilton (2000) has shown that, except for the highest 25% of entrepreneurial incomes, staying in a wage job or moving back to it makes more economic sense than starting a new business. Along similar lines, Moskovitz and Vissing-Jørgensen (2002) have investigated the risk-return profile of investments in private enterprises and found them to be inferior to those in publicly traded assets such as stocks. High business failure rates and low average financial returns to entrepreneurship suggest that, at least with respect to pecuniary interests and individual welfare, too many people may be entering markets as entrepreneurs. Given the social and economic relevance of creating new businesses, it is important to understand how entry decisions are made, what factors influence individuals who make these decisions, and what kinds of errors these individuals are likely to make. Excess entrepreneurial entry into markets has also been demonstrated in experimental studies and causally linked to overconfidence. Camerer and Lovallo (1999) run a simultaneous market-entry experiment where the payoffs of participants decrease with the number of entrants, i.e. the intensity of competition. Their findings showed that entering subjects thought that the total profit earned by all entrants would be negative but estimated that their own profit would be positive. Camerer and Lovallo (1999) also suggest that the analysis conducted with field data would be a very desirable way to study further the possibility of overconfidence as an explanation for excess entry and an especially compelling complement to experimental evidence. Finding empirical evidence of overconfidence requires measuring entrepreneurial confidence and linking such measure to actual start-up activities. Our paper contributes to this area of inquiry. Using a large sample obtained from surveys conducted in 18 countries, we use probit analyses to study what variables have a significant impact on an individual’s decision to start a business. Data used in our analysis were collected for the 2001 population survey of the Global Entrepreneurship Monitor (GEM) project. GEM is an ongoing large scale academic project designed to study the causes and implications of entrepreneurial behavior across countries. The main purpose of the survey was to create a representative random sample of population in each country and to identify individuals in each sample who, at the time of the survey, owned and managed a business or were in the process of starting one. Our data are original and exceptionally well suited for our purpose since they do not rely on the respondents ex post explanations for their own decisions. In other words, our data do not suffer from “hindsight bias” (Fischhoff, 1975 and Thaler, 2000). Our results provide significant evidence that subjective and possibly biased perceptions have a crucial impact on new business creation. In particular, confidence in one’s own entrepreneurial skills emerges as a major driver in the decision to start a business across all countries in our sample. First, large variations in perceptions about one’s own skills exist across countries. Yet, across countries, we found only weak or no positive correlation between education and confidence in one’s own skill. Second, we find nascent entrepreneurs to be more confident in their own skills than individuals who have been successfully in business for some times. That is, confidence in one’s own skills appears to be stronger among individuals in early stages of the entrepreneurial process, when the outcome of the business is still based on expectations, than among individuals whose skills have been tested by the market. In fact, our regression models indicate that perceptions about one’s own skills provide a higher relative contribution to the difference between nascent entrepreneurs and non-entrepreneurs than to the difference between established entrepreneurs and non-entrepreneurs. Finally, we find that countries exhibiting a high rate of entrepreneurial confidence exhibit significantly higher start-up activity but lower average chances that a business will survive in the market for more than 42 months. Overall, our evidence suggests that potential entrepreneurs may be overconfident in their own skills and abilities. In addition to socio-economic and demographic factors, differences in subjective perceptions and the extent to which such perceptions are biased may help us to understand why some people start businesses while others do not. Our results complement and support the experimental findings of Camerer and Lovallo (1999) and suggest that, rather than an accurate assessment of one’s own abilities, it may be overconfidence that often leads individuals to start a business. The connection between entrepreneurial decisions and overconfidence may explain, in part, the high failure rate of new business owners.

Starting a business is an intentional act that involves repeated attempts to exercise control over a process in order to achieve the desired outcome. If, indeed, entrepreneurial decisions are largely based on perceptions, and the cognitive mechanism we have discussed leads to overconfidence, it is likely that entrepreneurs overestimate their control over events. As a result, the entrepreneurial environment may be populated by individuals who adopt an “inside view” and act on overconfident self-perceptions. Overconfident perceptions may lead these individuals to overestimate their skills and make them think “they can”. In general, individual perceptions are influenced by various factors, including economic framework conditions, history, culture and psychological phenomena such as heuristics and biases. Thus, perceptions of individual ability and risk may differ from actual abilities and risks. Yet, these possibly biased perceptions are strongly associated with actual start-up activities and have real economic consequences. This is not to say that perceptual biases are generally bad. Ironically, individual overconfidence may even lead to better economic outcomes for society at large than more unbiased decision making.