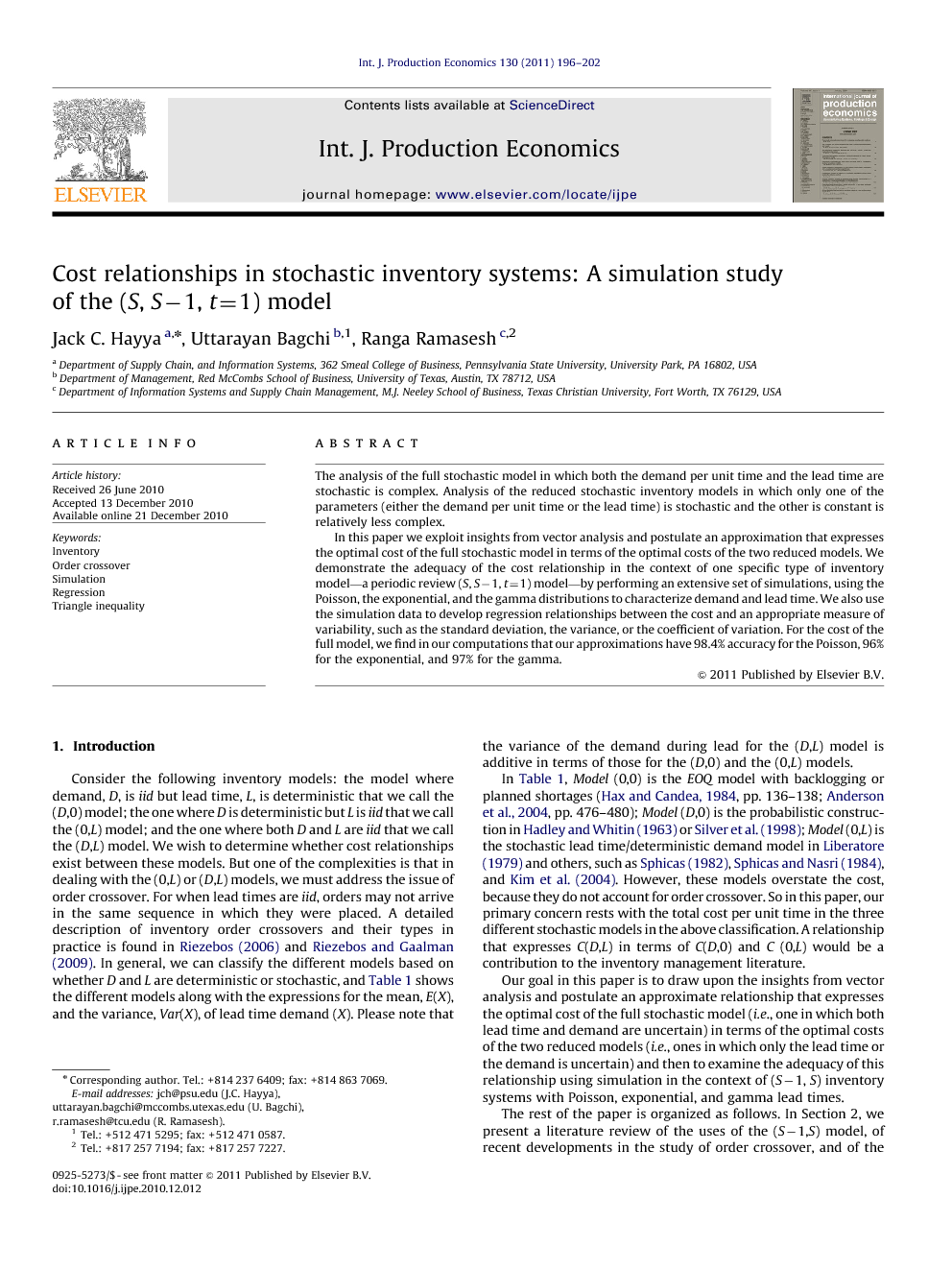 The analysis of the full stochastic model in which both the demand per unit time and the lead time are stochastic is complex. Analysis of the reduced stochastic inventory models in which only one of the parameters (either the demand per unit time or the lead time) is stochastic and the other is constant is relatively less complex. In this paper we exploit insights from vector analysis and postulate an approximation that expresses the optimal cost of the full stochastic model in terms of the optimal costs of the two reduced models. We demonstrate the adequacy of the cost relationship in the context of one specific type of inventory model—a periodic review (S, S−1, t=1) model—by performing an extensive set of simulations, using the Poisson, the exponential, and the gamma distributions to characterize demand and lead time. We also use the simulation data to develop regression relationships between the cost and an appropriate measure of variability, such as the standard deviation, the variance, or the coefficient of variation. For the cost of the full model, we find in our computations that our approximations have 98.4% accuracy for the Poisson, 96% for the exponential, and 97% for the gamma.

Consider the following inventory models: the model where demand, D, is iid but lead time, L, is deterministic that we call the (D,0) model; the one where D is deterministic but L is iid that we call the (0,L) model; and the one where both D and L are iid that we call the (D,L) model. We wish to determine whether cost relationships exist between these models. But one of the complexities is that in dealing with the (0,L) or (D,L) models, we must address the issue of order crossover. For when lead times are iid, orders may not arrive in the same sequence in which they were placed. A detailed description of inventory order crossovers and their types in practice is found in Riezebos (2006) and Riezebos and Gaalman (2009). In general, we can classify the different models based on whether D and L are deterministic or stochastic, and Table 1 shows the different models along with the expressions for the mean, E(X), and the variance, Var(X), of lead time demand (X). Please note that the variance of the demand during lead for the (D,L) model is additive in terms of those for the (D,0) and the (0,L) models. In Table 1, Model (0,0) is the EOQ model with backlogging or planned shortages (Hax and Candea, 1984, pp. 136–138; Anderson et al., 2004, pp. 476–480); Model (D,0) is the probabilistic construction in Hadley and Whitin (1963) or Silver et al. (1998); Model (0,L) is the stochastic lead time/deterministic demand model in Liberatore (1979) and others, such as Sphicas (1982), Sphicas and Nasri (1984), and Kim et al. (2004). However, these models overstate the cost, because they do not account for order crossover. So in this paper, our primary concern rests with the total cost per unit time in the three different stochastic models in the above classification. A relationship that expresses C(D,L) in terms of C(D,0) and C (0,L) would be a contribution to the inventory management literature. Our goal in this paper is to draw upon the insights from vector analysis and postulate an approximate relationship that expresses the optimal cost of the full stochastic model (i.e., one in which both lead time and demand are uncertain) in terms of the optimal costs of the two reduced models (i.e., ones in which only the lead time or the demand is uncertain) and then to examine the adequacy of this relationship using simulation in the context of (S−1, S) inventory systems with Poisson, exponential, and gamma lead times. The rest of the paper is organized as follows. In Section 2, we present a literature review of the uses of the (S−1,S) model, of recent developments in the study of order crossover, and of the literature on the (D,0), (0,L), and (D,L) inventory models. In Section 3, we present the conceptual underpinnings of the approximate cost relationship we propose and describe the inventory model for which we carry out the simulations. In Section 4, we present the results of the simulations and check the accuracy of the postulated cost relationship, which turns out to be 96% or above. In Section 5, we present regression relationships to provide insights on how costs relate to variability. Section 6 has the summary and conclusions. We attach an appendix for a list of symbols and acronyms used.

Analysis of stochastic inventory models in which lead times are independent and identically distributed is rendered complex by the phenomenon of order crossover. And if both the demand per unit time and the lead time are stochastic, the mathematical analysis becomes intractable. But neglecting to consider the effect of order crossover not only renders the analysis unrealistic, but leads to an overestimate of the inventory cost, because the analysis would then ignore the salutary effect of order crossover, to wit, that order crossover reduces the variability of the replenishment lead times. The analysis of inventory models in which only one of the parameters (either the demand per unit time or the lead time) is stochastic and the other is constant is understandably less complex. In this paper we exploit insights from vector analysis and postulate a relationship analogous to the triangle inequality that expresses the optimal cost of the full stochastic model (where both demand and lead time are stochastic) in terms of the optimal cost of the two separate models, one where only the demand is stochastic and the other where only the lead time is stochastic. Let (D,L) represent the inventory model where both demand, D, and lead time, L, are stochastic and let (D,0) and (0,L) represent the models when only one of these is stochastic and the other is deterministic. In this paper, we investigate whether in a periodic (S−1, S, t=1) inventory model we could establish a relationship between the costs of the (D,0) and (0,L) models to that of the (D,L) model. In general we found that such a relationship obtains to a high degree of accuracy. For the cost of the full model, we find in our computations that our approximations have 98.4% accuracy for the Poisson, 96% for the exponential, and 97% for the gamma. And in an extensive set of simulations, we succeeded in establishing regression relationships between the costs of these models, on the one hand, and demand or lead time variability parameters, on the other. We use three distributions: the Poisson, the exponential, and the gamma. The measure of variability for the Poisson is the mean, which is equal to the variance; that for the exponential is the mean which is equal to the standard deviation; and for the gamma it is the coefficient of variation. The implications for academic research and practice in inventory is that we can take a leap to entertain advanced mathematics (and also Physics) concepts. There is also the possibility of using our proposed cost relationships in the context of other types of inventory models, such as the continuous review, reorder point model.