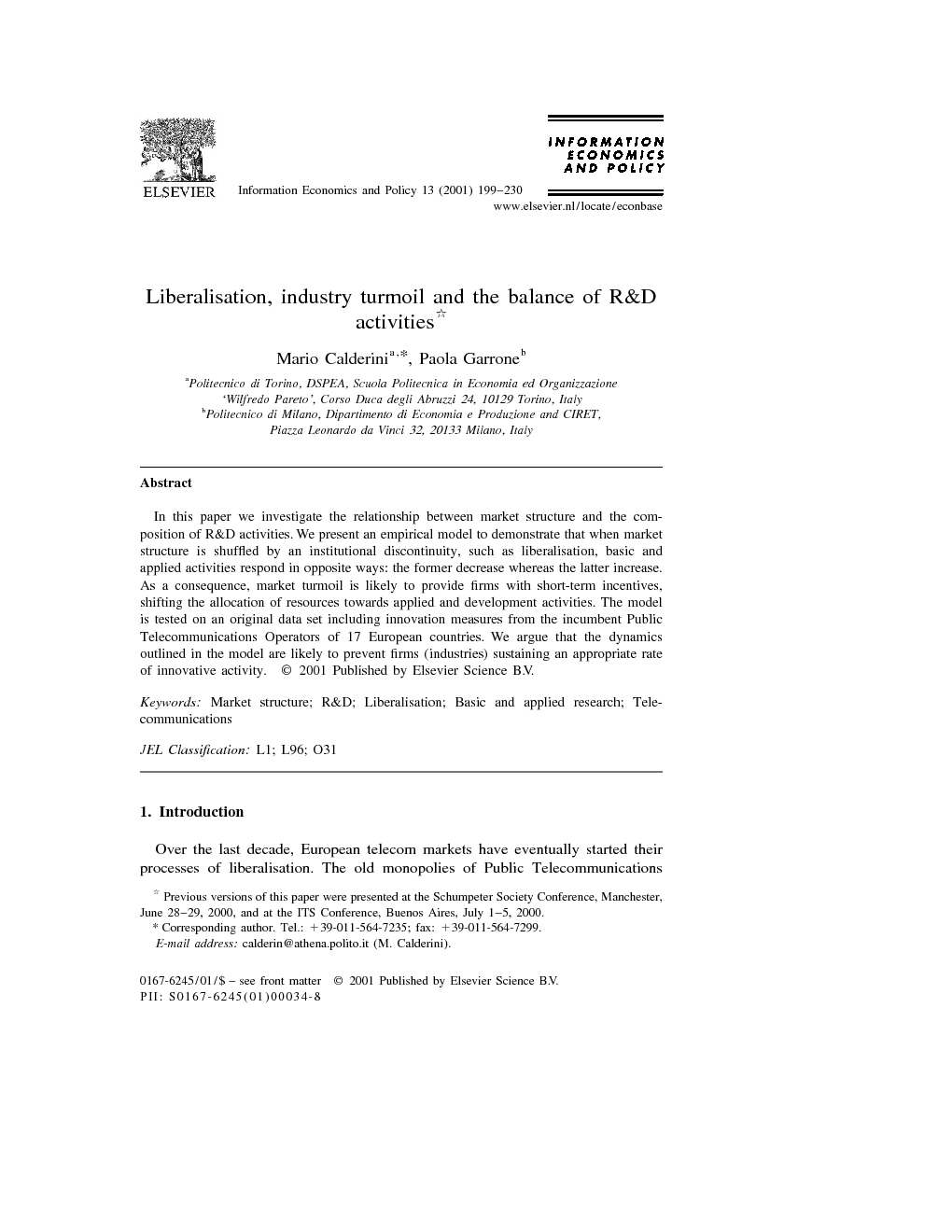 In this paper we investigate the relationship between market structure and the composition of R&D activities. We present an empirical model to demonstrate that when market structure is shuffled by an institutional discontinuity, such as liberalisation, basic and applied activities respond in opposite ways: the former decrease whereas the latter increase. As a consequence, market turmoil is likely to provide firms with short-term incentives, shifting the allocation of resources towards applied and development activities. The model is tested on an original data set including innovation measures from the incumbent Public Telecommunications Operators of 17 European countries. We argue that the dynamics outlined in the model are likely to prevent firms (industries) sustaining an appropriate rate of innovative activity.

Over the last decade, European telecom markets have eventually started their processes of liberalisation. The old monopolies of Public Telecommunications Operators (PTOs) have systematically been replaced by liberalised markets, in which domestic and foreign investors are striving hard to establish and consolidate their market positions. The vast majority of OECD countries are now well ahead in the process of market liberalisation and the debate about the effects of competition has reached its peak. Very many of the arguments tend to support the idea that the net effect of the institutional change will be positive, both socially and for the incumbent firm. Nevertheless, there also seems to be a widespread awareness about the existence of potential sources of market failures, as witnessed by the ever-increasing regulatory activity performed by national authorities. Among the controversial issues, the debate about the actual suitability of market incentives to generate and sustain an appropriate rate of technical progress within the country has until now occupied a relatively marginal position. The crucial question is how, and how much, firms’ R&D expenditure profiles will be affected by institutional transition generating industry turmoil, both in terms of total amount and in terms of composition. This paper focuses on the latter issue, that is, on the effects of liberalisation on the balance between basic and applied R&D.1 In this section we will report some of the prominent concerns that have been expressed by many policy experts all over the world on the fate of industrial basic research; to this end, we will briefly review some anecdotal evidence about firms’ basic research strategies, in order to stress the relevance that such an issue might assume in the near future. The review is intrinsically biased towards the US experience, given the fact that that market is well along the way of market liberalisation.