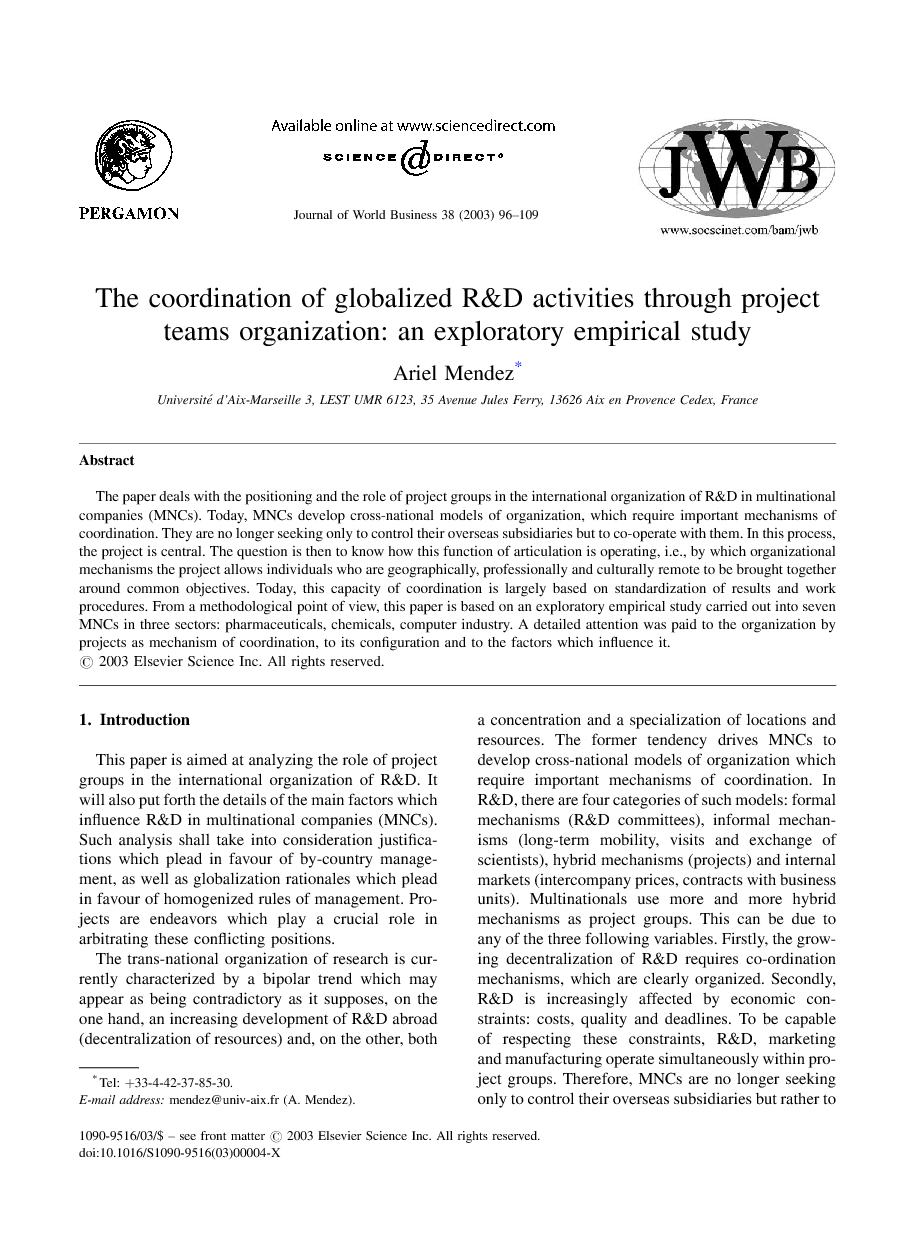 The paper deals with the positioning and the role of project groups in the international organization of R&D in multinational companies (MNCs). Today, MNCs develop cross-national models of organization, which require important mechanisms of coordination. They are no longer seeking only to control their overseas subsidiaries but to co-operate with them. In this process, the project is central. The question is then to know how this function of articulation is operating, i.e., by which organizational mechanisms the project allows individuals who are geographically, professionally and culturally remote to be brought together around common objectives. Today, this capacity of coordination is largely based on standardization of results and work procedures. From a methodological point of view, this paper is based on an exploratory empirical study carried out into seven MNCs in three sectors: pharmaceuticals, chemicals, computer industry. A detailed attention was paid to the organization by projects as mechanism of coordination, to its configuration and to the factors which influence it.

This paper is aimed at analyzing the role of project groups in the international organization of R&D. It will also put forth the details of the main factors which influence R&D in multinational companies (MNCs). Such analysis shall take into consideration justifications which plead in favour of by-country management, as well as globalization rationales which plead in favour of homogenized rules of management. Projects are endeavors which play a crucial role in arbitrating these conflicting positions. The trans-national organization of research is currently characterized by a bipolar trend which may appear as being contradictory as it supposes, on the one hand, an increasing development of R&D abroad (decentralization of resources) and, on the other, both a concentration and a specialization of locations and resources. The former tendency drives MNCs to develop cross-national models of organization which require important mechanisms of coordination. In R&D, there are four categories of such models: formal mechanisms (R&D committees), informal mechanisms (long-term mobility, visits and exchange of scientists), hybrid mechanisms (projects) and internal markets (intercompany prices, contracts with business units). Multinationals use more and more hybrid mechanisms as project groups. This can be due to any of the three following variables. Firstly, the growing decentralization of R&D requires co-ordination mechanisms, which are clearly organized. Secondly, R&D is increasingly affected by economic constraints: costs, quality and deadlines. To be capable of respecting these constraints, R&D, marketing and manufacturing operate simultaneously within project groups. Therefore, MNCs are no longer seeking only to control their overseas subsidiaries but rather to co-operate with them. They use their differences to take advantage of the variety of skills which are eventually available for the company. Yet, project is crucial to do this. Thirdly, today international mobility does not seem to be a proper co-ordination mechanism of R&D, mostly because of organizational configurations. Project is a substitute for it. Then, the question is how such coordination would work, i.e., what types of organizational mechanism make possible the co-operation between people, geographically dispersed, with different cultural and professional background. The aim of this paper is then to identify the modes of coordination and control which are associated with trans-national teams. Coordination is an “enabling process to bring about the appropriate linkages between tasks” (Cray, 1984: 86). It largely includes aspects of communication as exchange of information through different media including face-to-face contact, telephone, letter and electronic mail (Nobel & Birkinshaw, 1998). Control refers to the variety of mechanisms used by corporate management to supervise and regulate the activities. Three types of coordination and control mechanisms can be distinguished: formalization of systems and procedures, socialization whereby organization members develop common expectations and shared values, and centralization as the management of the project can be done either on a centralized way (centralized project management or technical standards) or by decentralized self-coordinating teams (“mirror organizations”). Which coordination and control modes would one expect within cross-national R&D projects? Burns and Stalker (1961) made the classic distinction between organic and mechanistic organizations. The R&D activity is characterized by rapidly changing technological conditions and low-defined job descriptions leading to open and flexible “organic” style of organization. Furthermore, strong centralization together with formalized planning often leads to inflexibility which is opposed to the best conditions for the R&D process (Reger, 1999). On the opposite side, the research we conducted exhibits high levels of centralization and formalization more than socialization in the management of cross-national R&D projects. Today, the integration of project teams’ activities is achieved through the standardization of objectives and work procedures. Projects generate organizational standards. Companies are organizing virtual teams which pursue common goals. Project participants are expected to demonstrate a level of performance compatible with that of the other teams working on the project. This means that individuals’ performance should be evaluated on the basis of standards which are shared regardless of location. The standardization of the overall evaluation of the project prevents performance differentials within an internationally decentralized organization. One question is then how to explain this preference for formalization and standardization. Of course, reaching such norms does not represent the same challenge for all companies. Firms’ orientation depends on their international R&D organization, the sector (nature of innovation and technology), international competition (diffusion of best practices), and organizational resources. The article is organized in six sections. While the second section presents the research, the third one focuses on the growing importance of the projects as mechanism of coordination in a global R&D activity. The fourth section describes how firms ensure the integration of trans-national project teams. Eventually, the fifth section proposes a contingency approach and identifies four groups of factors, which influence projects organization.