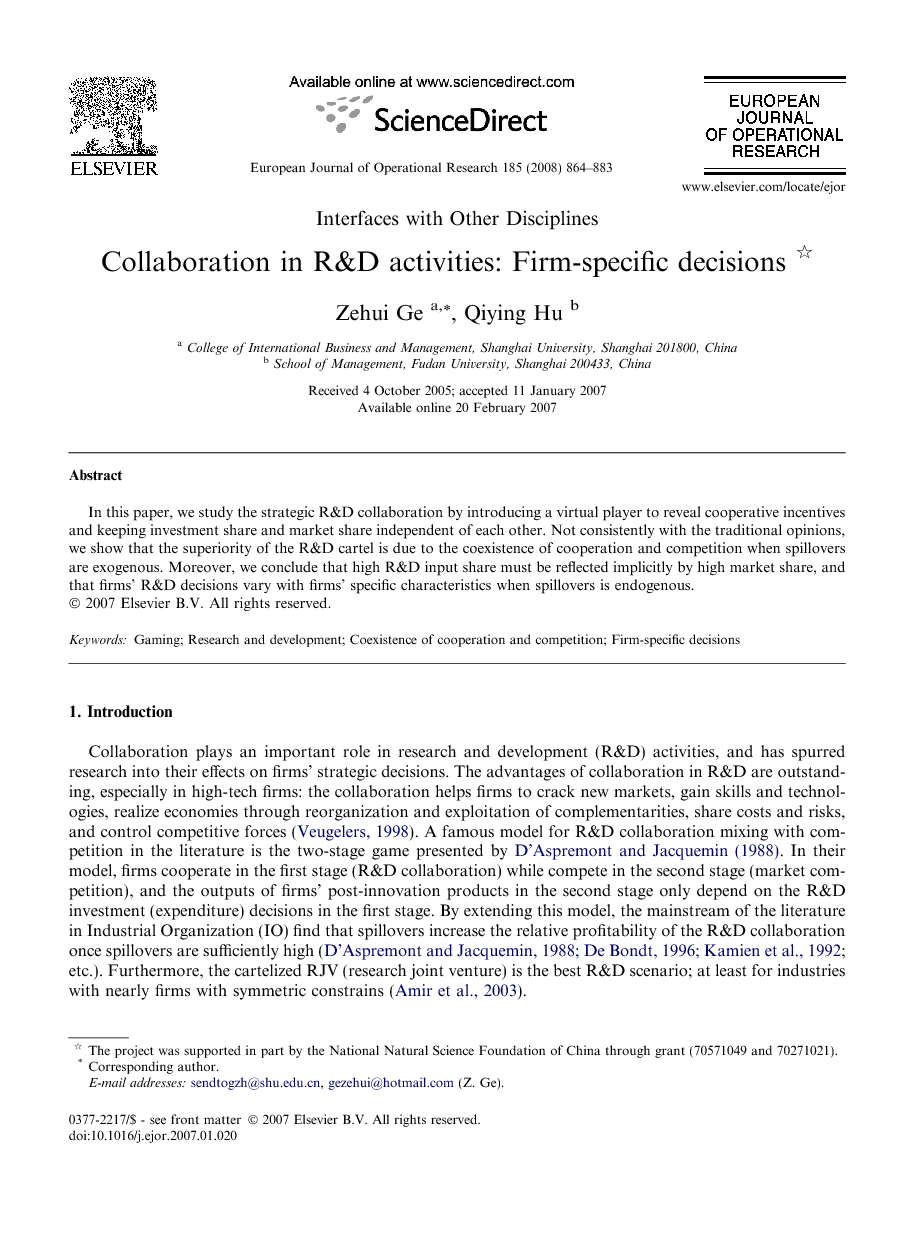 In this paper, we study the strategic R&D collaboration by introducing a virtual player to reveal cooperative incentives and keeping investment share and market share independent of each other. Not consistently with the traditional opinions, we show that the superiority of the R&D cartel is due to the coexistence of cooperation and competition when spillovers are exogenous. Moreover, we conclude that high R&D input share must be reflected implicitly by high market share, and that firms’ R&D decisions vary with firms’ specific characteristics when spillovers is endogenous.

The models discussed in this paper differ from the two-stage game models presented in the literature: • several determinants are integrated here; • a virtual player is introduced here to reveal the cooperative incentives, whose utility function is the total profit of the alliance; • the investment share and the market share are considered simultaneously, in consideration of the difficulty to agree on the market share of the post-innovation products. Under the framework with the above aspects, we analyzed the R&D collaboration, by comparing with the non-cooperative R&D and the R&D monopoly. This analysis results in the following four conclusions. First, all firms are convinced of the positive correlation between the R&D expenditure and the output of the post-innovation products. Namely, their enlargement in the R&D investment must be reflected by a larger output of the future products. Moreover, the uncertainty in the R&D collaboration negatively affects the R&D expenditure. Second, with the exogenous spillovers, both the outputs and the R&D expenditures in the R&D cartel are larger than those in other R&D scenarios. The R&D cartel has to coordinate members’ market share to maximize the total profit, without loss of the members’ individual profits. Therefore, the R&D cartel is superior to other scenarios, even though the producer surplus reaches the maximum in the monopolistic R&D. Differently from that in the literature, we show that this superiority comes from the coexistence of the concern about the total profit and that about the individual profits. Third, after introducing the firm-specific absorptive capacity and the cost-reducing function, we claim that the spillover level plays a dual but still significant role in deciding the R&D investment. Not consistently with the prevailing viewpoint, firms take different actions on the R&D investment when the spillovers are endogenous. Namely, when firms in a RJV or a cartelized RJV increase the spillover level, whether or not they increase their investment with spillovers are determined by the firm-specific determinants such as the absorptive capacity, the market competition, the degree of risk-aversion, etc. It is a balanced result among the R&D determinants. Finally, the interactions among members in the R&D cartel are determined by the combined cost externality. A firm’s reaction to other also varies with its characteristics. In this paper, we do not consider the stability of the R&D collaboration, and the problems which may appear in management and reorganization. Overall, both the firm-specific R&D resources and the coexistence of competition and collaboration make it more complex to anticipate firms’ decisions.