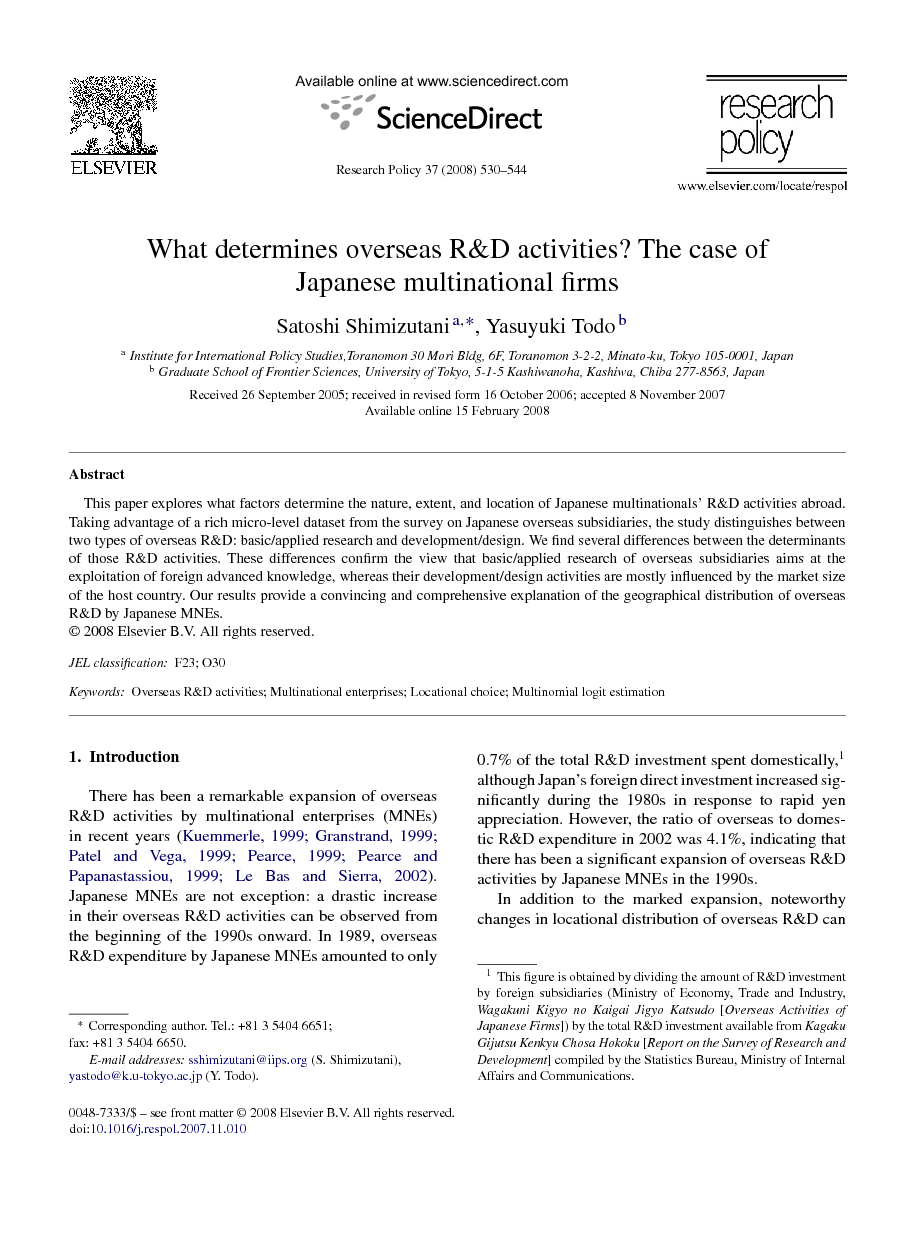 This paper explores what factors determine the nature, extent, and location of Japanese multinationals’ R&D activities abroad. Taking advantage of a rich micro-level dataset from the survey on Japanese overseas subsidiaries, the study distinguishes between two types of overseas R&D: basic/applied research and development/design. We find several differences between the determinants of those R&D activities. These differences confirm the view that basic/applied research of overseas subsidiaries aims at the exploitation of foreign advanced knowledge, whereas their development/design activities are mostly influenced by the market size of the host country. Our results provide a convincing and comprehensive explanation of the geographical distribution of overseas R&D by Japanese MNEs.

This paper took advantage of a rich micro-level dataset on Japanese subsidiaries to explore what determines Japanese MNEs’ R&D activities abroad. We were able to discern several interesting patterns in such overseas R&D activities since the mid-1990s. First, there was a slight increase between 1996 and 2000 in the share of overseas subsidiaries that perform R&D. Second, Japanese MNEs largely perform both basic/applied research and development/design (Type R activities) in frontier countries, such as the United States, Britain and France, as well as in the two newly industrialized East Asian economies of South Korea and Taiwan. In other parts of East Asia, including China, Hong Kong, Indonesia, Malaysia, Thailand and Singapore, the bulk of overseas R&D-performing Japanese MNEs consists of those performing development/design only (Type D activities), although Japanese MNEs also perform basic/applied research in these countries to some extent. Our empirical investigation based on a multinomial logit model examined the determinants of overseas R&D by Japanese MNEs, distinguishing between the two types of overseas R&D: Type R and Type D. We found several differences between the determinants of the two types. Most notably, the ratio of national R&D expenditure-to-GDP of the host country, representing the knowledge level of the host country, was found to have a positive impact on the probability of performing Type R activities but no significant impact in the case of Type D. In addition, the parent firm's R&D expenditure-to-sales ratio, representing the knowledge level of the parent, had an insignificant effect on Type R activities but a positive effect on Type D. On the other hand, the probability of performing both types of R&D activity was positively correlated with the GDP, standing for the size of the market, of the host country. These results suggest that basic/applied research in overseas subsidiaries aims at the exploitation of foreign advanced knowledge, whereas the primary role of overseas development/design is to adapt products and technologies to local conditions using parent firms’ existing knowledge when the local market is large. Other important factors that affect overseas R&D decision are overseas subsidiaries’ size and years of experience in the host country, geographical proximity to Japan, and the wage level of local engineers. Taken together, these factors provide a plausible and comprehensive explanation of the geographical distribution of overseas R&D by Japanese MNEs.