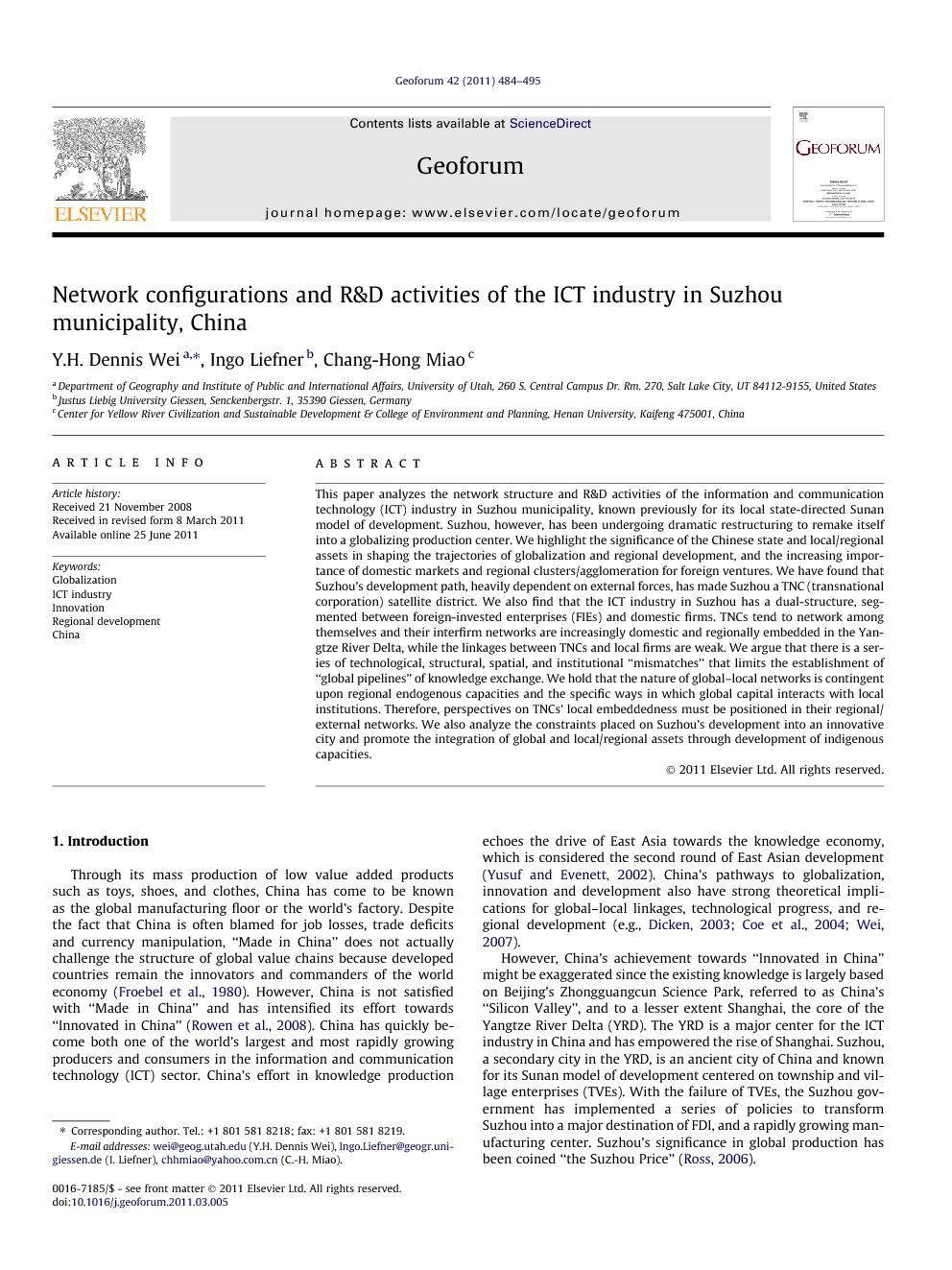 This paper analyzes the network structure and R&D activities of the information and communication technology (ICT) industry in Suzhou municipality, known previously for its local state-directed Sunan model of development. Suzhou, however, has been undergoing dramatic restructuring to remake itself into a globalizing production center. We highlight the significance of the Chinese state and local/regional assets in shaping the trajectories of globalization and regional development, and the increasing importance of domestic markets and regional clusters/agglomeration for foreign ventures. We have found that Suzhou’s development path, heavily dependent on external forces, has made Suzhou a TNC (transnational corporation) satellite district. We also find that the ICT industry in Suzhou has a dual-structure, segmented between foreign-invested enterprises (FIEs) and domestic firms. TNCs tend to network among themselves and their interfirm networks are increasingly domestic and regionally embedded in the Yangtze River Delta, while the linkages between TNCs and local firms are weak. We argue that there is a series of technological, structural, spatial, and institutional “mismatches” that limits the establishment of “global pipelines” of knowledge exchange. We hold that the nature of global–local networks is contingent upon regional endogenous capacities and the specific ways in which global capital interacts with local institutions. Therefore, perspectives on TNCs’ local embeddedness must be positioned in their regional/external networks. We also analyze the constraints placed on Suzhou’s development into an innovative city and promote the integration of global and local/regional assets through development of indigenous capacities.

Through its mass production of low value added products such as toys, shoes, and clothes, China has come to be known as the global manufacturing floor or the world’s factory. Despite the fact that China is often blamed for job losses, trade deficits and currency manipulation, “Made in China” does not actually challenge the structure of global value chains because developed countries remain the innovators and commanders of the world economy (Froebel et al., 1980). However, China is not satisfied with “Made in China” and has intensified its effort towards “Innovated in China” (Rowen et al., 2008). China has quickly become both one of the world’s largest and most rapidly growing producers and consumers in the information and communication technology (ICT) sector. China’s effort in knowledge production echoes the drive of East Asia towards the knowledge economy, which is considered the second round of East Asian development (Yusuf and Evenett, 2002). China’s pathways to globalization, innovation and development also have strong theoretical implications for global–local linkages, technological progress, and regional development (e.g., Dicken, 2003, Coe et al., 2004 and Wei, 2007). However, China’s achievement towards “Innovated in China” might be exaggerated since the existing knowledge is largely based on Beijing’s Zhongguangcun Science Park, referred to as China’s “Silicon Valley”, and to a lesser extent Shanghai, the core of the Yangtze River Delta (YRD). The YRD is a major center for the ICT industry in China and has empowered the rise of Shanghai. Suzhou, a secondary city in the YRD, is an ancient city of China and known for its Sunan model of development centered on township and village enterprises (TVEs). With the failure of TVEs, the Suzhou government has implemented a series of policies to transform Suzhou into a major destination of FDI, and a rapidly growing manufacturing center. Suzhou’s significance in global production has been coined “the Suzhou Price” (Ross, 2006). This paper analyzes the development and structure of the ICT industry in China through a study of Suzhou Municipality, one of China’s leaders in ICT industrial development, with an emphasis on the global–local networks in production and R&D activities. Specifically, we investigate Suzhou’s pathway to regional development, the structure of foreign direct investment (FDI) and the ICT industry, and the nature of global–local networks. We ask: (1) What are the structural characteristics of ICT industrial development and innovative activities in Suzhou? (2) What is the nature of global–local linkages and how embedded are transnational corporations (TNCs) in local economies? (3) How structurally different are foreign and domestic firms in R&D activities and what are the effects of TNCs on local R&D activities? (4) What are the constraints on local innovation, and what are the implications of Suzhou’s experiences for the trajectories of technological progress and regional development? We also discuss the constraints placed on embedding TNCs and developing Suzhou into an innovative city. We study the ICT sector because it is one of the most globalized, innovative and dynamic industries (Yusuf and Evenett, 2002) and one of the fastest growing industries in China. We examine the ways in which forces of global capital intersect with China’s local institutions and places at the sub-national scale. We argue that Suzhou’s development path, heavily dependent on external forces, has made Suzhou a TNC satellite district; that the ICT industry in Suzhou has a dual-structure, segmented between foreign ventures and domestic firms; and that TNCs tend to network among themselves and that the linkages between TNCs and local firms remain weak. We also argue that there is a series of technological, structural, spatial, and institutional “mismatches” which limit the establishment of knowledge exchange between Suzhou and global hot spots. We maintain that the nature of global–local networks is contingent upon the specific ways that global capital interacts with local institutions. Our data come from national and regional statistics, a survey of the ICT industry, and interviews of firms and public officials in Suzhou.

This paper analyzes the network structure and R&D activities of the ICT industry in Suzhou municipality. We highlight the significance of the Chinese state and local/regional assets in shaping the trajectories of globalization and regional development. Suzhou has been transformed from a region known for the Sunan model of development dominated by TVEs and SOEs into an externally driven production center dominated by FIEs. Despite the end of the orthodox Sunan model, active local states are still in operation, and Suzhou has made a series of efforts to globalize the city. While foreign ventures are known for their mobility, we have found the increasing importance of regional clusters/agglomeration for location and network decisions of foreign ventures, indicating the significance of the pervasive force of local/regional agglomeration in industrial location and regional development. We have found that Suzhou’s development path, heavily dependent on external forces, has made Suzhou a TNC satellite production district dominated by TNCs and external organizations, where its indigenous firms are small, low-tech, and locally oriented. The satellite nature means that the city functions largely as a TNC manufacturing floor for the global and Chinese markets. The ICT industry in Suzhou has a dual-structure, segmented between FIEs and domestic firms. FIEs tend to network among themselves, and their interfirm networks are increasingly domestic and regionally embedded in the Yangtze River Delta. TNCs are weakly embedded with local economies, and there is little cooperation between foreign and domestic firms in R&D and innovative activities. The weak local embeddedness has technological, structural, spatial and institutional foundations (mismatches), which limit the establishment of knowledge ‘pipelines’ with global innovation centers. Our study suggests that the nature of global–local networks is contingent upon regional endogenous capacities and the specific ways in which global capital interacts with local institutions, not merely on firms’ absorption capacities. The Suzhou case also suggests that globalizing regional development has the danger of promoting satellite districts, and that localizing the global is another aspect of the globalization process to which localities must pay particular attention. While our overall assessment of the Suzhou pathway to industrialization and regional development is positive, and we recognize that the city has had to use foreign capital to move beyond its stagnating economy once dominated by uncompetitive SOEs and TVEs, Suzhou might be better off if it had given more weight to business services and private enterprises and been more cautious with industrial land use and urban spatial organization. On the other hand, the networks of FIEs extend to the YRD, which suggests that we must evaluate the nature of global–local networks in a broader context rather than at the local level only. More generally, in opening up to the outside world, developing countries have to pay more attention to using external resources for the development of endogenous firms and innovation capacities, which does not prevent them from breaking economic impasses and narrowing their economic gaps with the developed world. Suzhou is increasingly aware of the importance of FDI embeddedness and local innovative capacities and has heightened its efforts to strengthen local innovative capacities. However, the future development of Suzhou faces a series of limitations and challenges. The city focuses primarily on manufacturing, and international experiences suggest that given its weak R&D and advanced service functions, Suzhou’s efforts to improve innovative activities will take a long time and require the commitment of huge resources. Since R&D has become the backbone for the development of high-tech industries, the most serious challenge to Suzhou’s development is the lack of top-ranked research institutions, resulting largely from Suzhou’s status as a prefectural-level city. The city is also trying to find a balance between serving and bargaining with TNCs to avoid driving them away from Suzhou, a paradox challenging all places in the increasingly globalizing world.