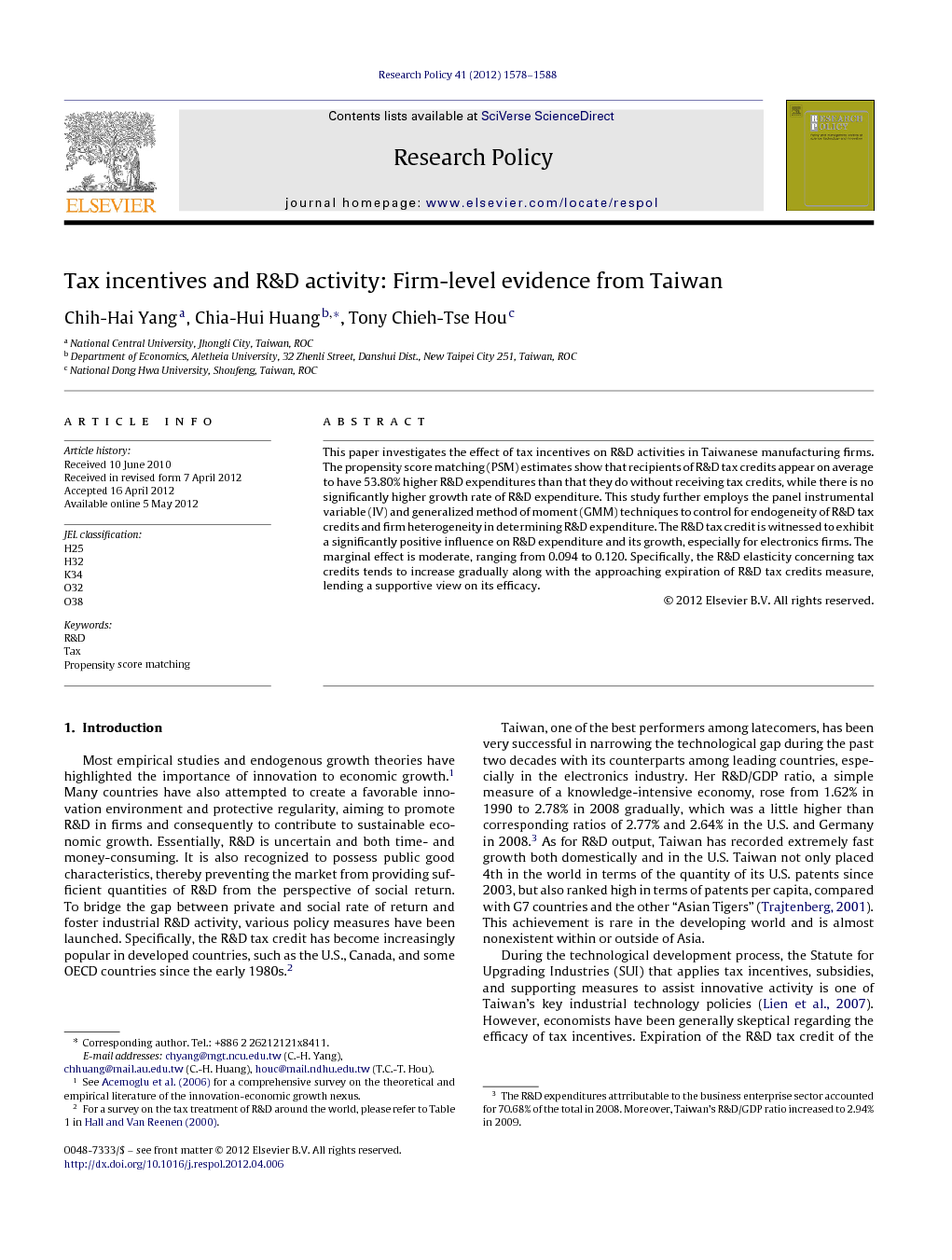 Although the effectiveness of fiscal incentives for private R&D has attracted widespread interest in many developed countries, it has received much less attention in newly industrialized economies (NIEs) and developing countries. Taiwan has been one of the most successful NIEs in the world in innovative performance over the past two decades, particularly in the technological field of electronics. One possible reason is that the government has adopted long-standing tax incentives to foster private R&D. Economists have traditionally been skeptical of the efficacy of any fiscal provisions. Is the R&D tax credit really an effective mechanism for encouraging firms to invest more in R&D? This issue is particularly important to Taiwan, because the tax credit policy that forms part of the SUI will expire at the end of 2009. The government must decide in the near future whether to extend the tax credit policy or change it in part, if not completely. This paper evaluates the effect of tax credits on R&D activity in Taiwan that differs from previous studies focused on estimating tax price elasticity of R&D based on R&D cost. We first adopt the propensity score matching method to simulate the scenario of how the treatment of R&D tax credits affects R&D activity of firms. The PSM approach helps to correct the selection bias that previous studies inadequately address. Secondly, to control for unobservable firm heterogeneity between treated and control groups which may affect R&D activity, this study employs both techniques of panel instrumental variable and GMM to estimate the influences of tax credits on R&D expenditure and its growth. Using a panel dataset of 576 enterprises listed on the Taiwan Stock Exchange over the 2000–2005 period, our empirical findings are summarized as follows. First, the PSM estimate shows that R&D tax credits induce a higher (53.8%) R&D expenditure, on average. This suggests that there is no crowding-out effect of public R&D support on private R&D, whereas there is a positive effect of R&D tax credits on private R&D. On the other hand, the growth level estimation of PSM demonstrates also a positive influence of tax credits on R&D expenditure growth, while this enhancing effect is not statistically significant. Secondly, the R&D-inducement effect of tax credits was found to differ between electronics and non-electronics firms. Specifically, this treatment effect is much stronger for electronics firms such that the recipients of R&D tax credit experience a higher (16.9%) growth of R&D investment and a higher (71.8%) R&D expenditure than those they do lacking this policy instrument. Alternatively, we do not find significant treatment effects on R&D expenditure and growth brought about by the R&D tax credit for non-electronics recipients. Third, estimates obtained using IV technique involving the panel data model show that the elasticity of R&D with respect to the taxation remit is 0.302 on average. The induced R&D expenditure effectuated by tax credits accounts for 9.4% to 12.0% of R&D for the sample firms. Moreover, estimates obtained using GMM lend the similar finding that tax credits do have a R&D growth-enhancing effect, particularly for electronics firms. This suggests that tax credits have a moderate effect on private R&D in Taiwan. Finally, the R&D elasticity of tax credit tends to increase slightly along with the approaching expiration of SUI. It suggests that firms prefer to appropriate the benefit of policy measure and lends supportive evidence on the effectiveness of R&D tax credits. Based on the above analyses, this study derives several policy implications. First, as this study overall finds a significantly positive R&D-inducement effect of R&D tax credits, the R&D preferential policy is deemed an effective policy tool for fostering private R&D activity, thereby supporting previous aggregate evidence. Secondly, as the marginal R&D-inducement effect facilitated by tax credit is relatively limited, whether this policy tool continues to be implemented after the SUI expires is worth careful evaluation, as the problem of fiscal deficit has seriously worsened in Taiwan in recent years.21 Third, because the effect of R&D tax credits differs between electronics and non-electronics firms, the government should devise ways to adjust the taxation reduction rate for R&D investment across industries. Finally, due to the limitation of using LMEs, this study cannot examine the criticism that SMEs have difficulty qualifying for tax credit. This issue is worth further investigation.