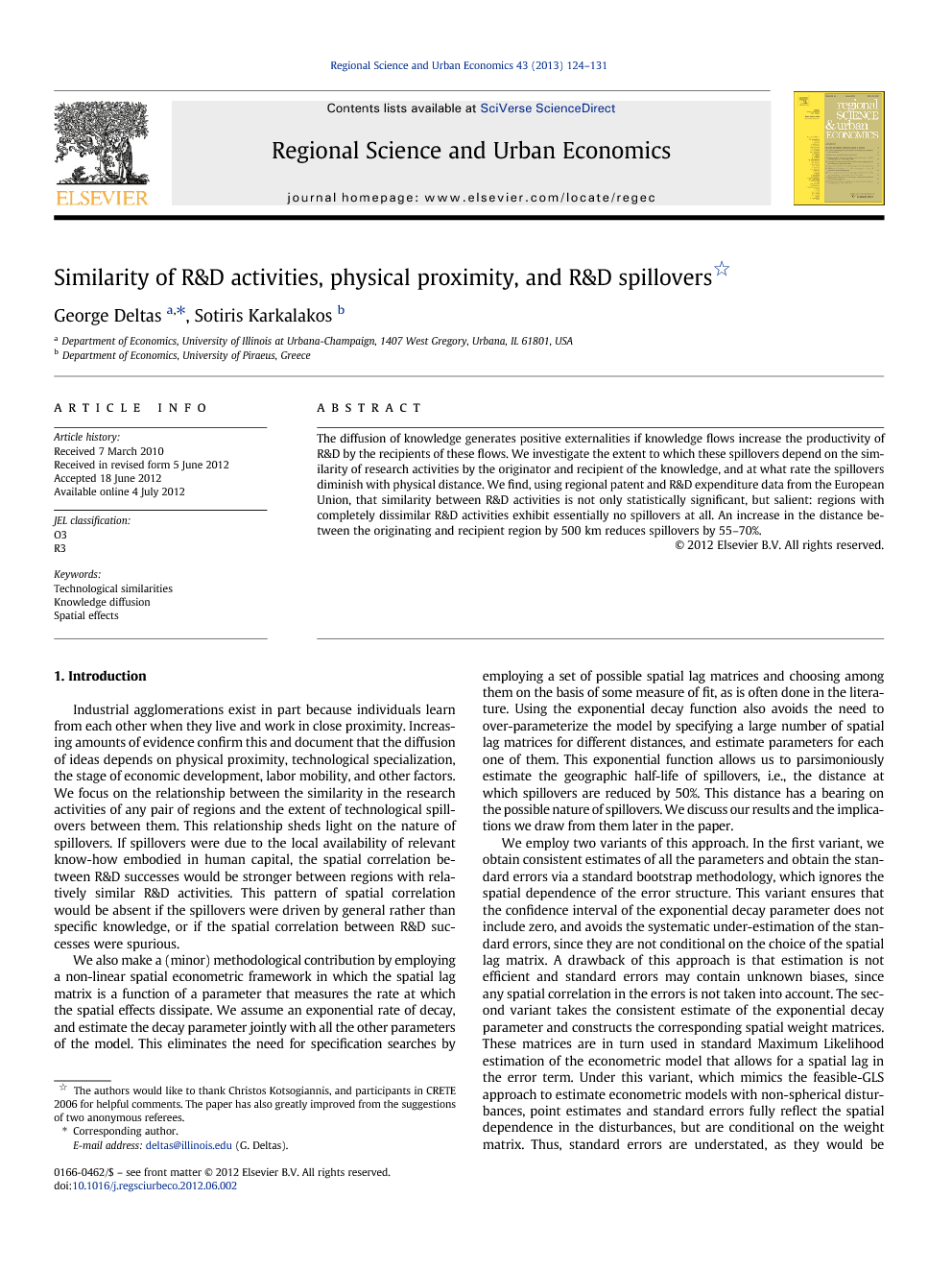 The diffusion of knowledge generates positive externalities if knowledge flows increase the productivity of R&D by the recipients of these flows. We investigate the extent to which these spillovers depend on the similarity of research activities by the originator and recipient of the knowledge, and at what rate the spillovers diminish with physical distance. We find, using regional patent and R&D expenditure data from the European Union, that similarity between R&D activities is not only statistically significant, but salient: regions with completely dissimilar R&D activities exhibit essentially no spillovers at all. An increase in the distance between the originating and recipient region by 500 km reduces spillovers by 55–70%.

Industrial agglomerations exist in part because individuals learn from each other when they live and work in close proximity. Increasing amounts of evidence confirm this and document that the diffusion of ideas depends on physical proximity, technological specialization, the stage of economic development, labor mobility, and other factors. We focus on the relationship between the similarity in the research activities of any pair of regions and the extent of technological spillovers between them. This relationship sheds light on the nature of spillovers. If spillovers were due to the local availability of relevant know-how embodied in human capital, the spatial correlation between R&D successes would be stronger between regions with relatively similar R&D activities. This pattern of spatial correlation would be absent if the spillovers were driven by general rather than specific knowledge, or if the spatial correlation between R&D successes were spurious. We also make a (minor) methodological contribution by employing a non-linear spatial econometric framework in which the spatial lag matrix is a function of a parameter that measures the rate at which the spatial effects dissipate. We assume an exponential rate of decay, and estimate the decay parameter jointly with all the other parameters of the model. This eliminates the need for specification searches by employing a set of possible spatial lag matrices and choosing among them on the basis of some measure of fit, as is often done in the literature. Using the exponential decay function also avoids the need to over-parameterize the model by specifying a large number of spatial lag matrices for different distances, and estimate parameters for each one of them. This exponential function allows us to parsimoniously estimate the geographic half-life of spillovers, i.e., the distance at which spillovers are reduced by 50%. This distance has a bearing on the possible nature of spillovers. We discuss our results and the implications we draw from them later in the paper. We employ two variants of this approach. In the first variant, we obtain consistent estimates of all the parameters and obtain the standard errors via a standard bootstrap methodology, which ignores the spatial dependence of the error structure. This variant ensures that the confidence interval of the exponential decay parameter does not include zero, and avoids the systematic under-estimation of the standard errors, since they are not conditional on the choice of the spatial lag matrix. A drawback of this approach is that estimation is not efficient and standard errors may contain unknown biases, since any spatial correlation in the errors is not taken into account. The second variant takes the consistent estimate of the exponential decay parameter and constructs the corresponding spatial weight matrices. These matrices are in turn used in standard Maximum Likelihood estimation of the econometric model that allows for a spatial lag in the error term. Under this variant, which mimics the feasible-GLS approach to estimate econometric models with non-spherical disturbances, point estimates and standard errors fully reflect the spatial dependence in the disturbances, but are conditional on the weight matrix. Thus, standard errors are understated, as they would be under the common estimation procedures in the spatial literature, which use fixed weight matrices. In contrast with the typical estimation approach in the spatial literature, in our approach the weight matrix is not fixed arbitrarily, but fixed at the values obtained by a consistent procedure. Knowledge flows have been extensively analyzed in the literature following the Grilliches (1992) and Jaffe (1989) knowledge production function approach.1 A complementary approach, by Jaffe et al. (1993), uses the distribution of patents across regions and measures the spatial autocorrelation of citations between any two regions. Related work includes Peri (2005), Hall et al. (2005), and others. Both approaches posit that patent counts are a reasonable measure of research output, a premise also supported by Trajtenberg (1990). Closer to our work are Bottazi and Peri (2003) and Peri (2005). The first of these two papers uses European regional data to investigate the effect of “technological proximity” on R&D spillovers, though this is done through a control variable and is not distance weighted (i.e., it is not part of the distance weight matrix). In that paper the authors pre-specify a set of distance weight matrices, rather than estimate the weights directly from the data using a non-linear model. The second paper, in which technology is a control, investigates the effects of technological proximity on citations, with citations being an input in the production of patents. Another contribution that is close to our work methodologically is Keller (2002), which estimates the effects of one country's R&D on productivity of that country and other countries. This paper estimates an exponential decline function for the spillover effects of R&D and, like the first of our two approaches, does not incorporate spatial dependence in the error structure.

Our analysis can be seen as a step in integrating two strands of the technology literature: the first focuses on spillovers at the firm level as a function of the type of innovation undertaken by firms; the second looks at the regional aggregate level of innovation and research activities and focuses on spillovers as a function of physical distance and other barriers. Our approach directly incorporates the effect of similarity of research activities into the spatial lag matrix rather than adds it as a control or intermediate input in the knowledge production function. Moreover, our approach, though computationally intensive, eliminates the need for specification searches through the use of different alternative weight matrices in spatial econometric models. We conclude by some avenues for future research that are suggested by our findings. If the extent of spatial R&D spillovers between two regions depends on the similarity of research activities undertaken by firms in these regions, then it follows that firms will choose to locate their research centers in regions (or near regions) in which similar firms (and research centers) are currently located. Thus, not only there will be spatial agglomeration of R&D activities, but there will also be spatial specialization of such activities. Indeed, there is some corroborating evidence (e.g., see Head et al., 1995). The detailed study of the inter-play of spatial agglomeration and spatial specialization, which would require detailed disaggregated panel data, is an important avenue for future study.