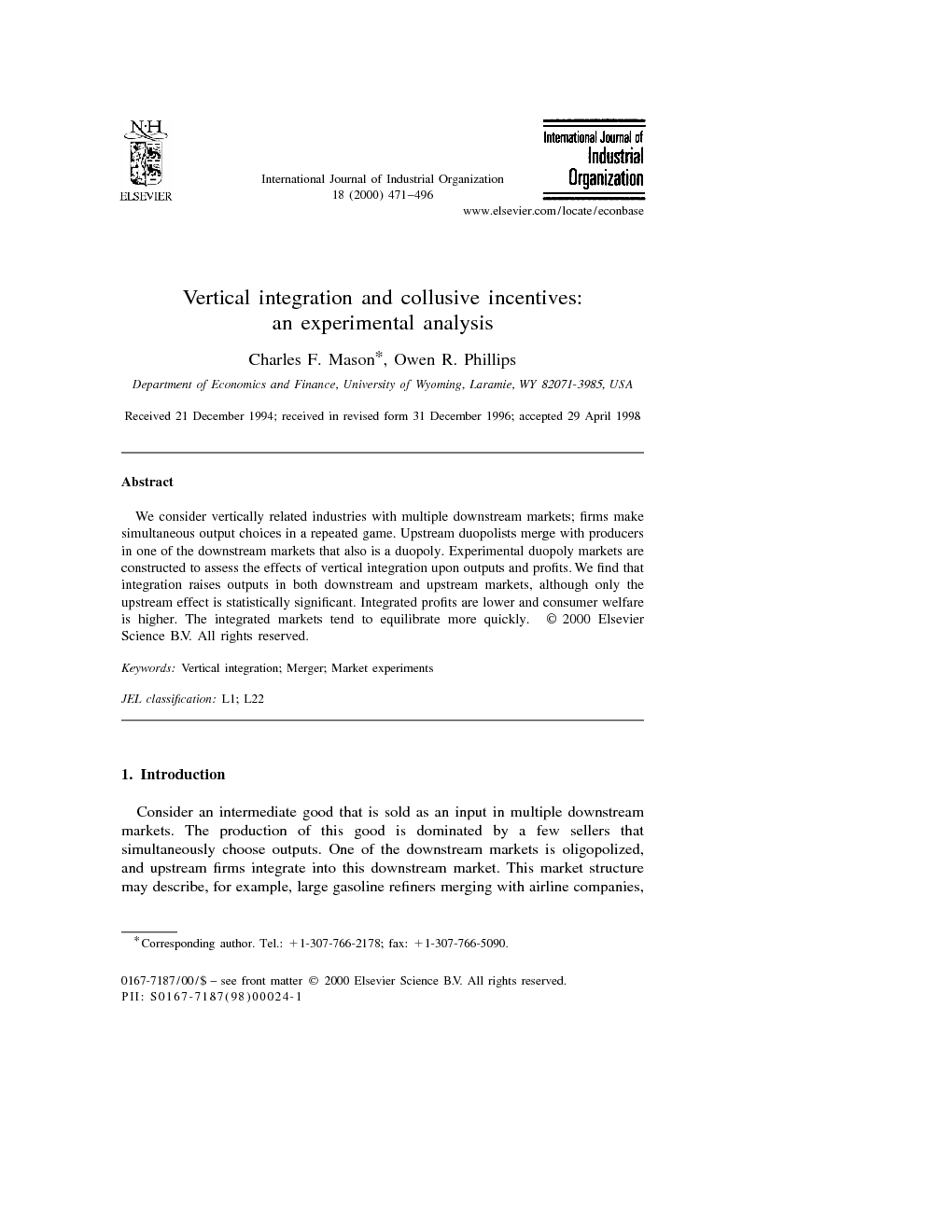 We consider vertically related industries with multiple downstream markets; firms make simultaneous output choices in a repeated game. Upstream duopolists merge with producers in one of the downstream markets that also is a duopoly. Experimental duopoly markets are constructed to assess the effects of vertical integration upon outputs and profits. We find that integration raises outputs in both downstream and upstream markets, although only the upstream effect is statistically significant. Integrated profits are lower and consumer welfare is higher. The integrated markets tend to equilibrate more quickly.

Our experimental analysis of vertically related markets yields a variety of results, some of which are unexpected. Subjects chose substantially larger outputs in upstream markets when placed in a vertically integrated structure. This is consistent with theory since integration allows firms to eliminate double marginalization. However, the increase in upstream output exceeds the theoretically anticipated change, by an amount that is statistically significant. At the same time, industry profits fell under integration. This is consistent with the noncooperative (Cournot) model, but again the change exceeds the theoretically predicted effect. Despite these lower profits, total surplus was larger in the vertically integrated markets, because of the marked increase in consumer surplus. We also find that downstream markets tend to stabilize more quickly in the integrated design than in the linked design. This may be the result of reduced uncertainty concerning upstream outputs, and the attendant reduction of uncertainty with respect to downstream costs. To the extent that agents are risk averse, this reduction in uncertainty provides an additional benefit to integration, which reinforces the increase in total surplus. Altogether, then, it appears that vertical integration had a procompetitive effect in our experimental markets. For roughly three decades following the Alcoa decision (United States v. Aluminum Co. of America, 148 F.2d 416 (2d Cir.1945), public policy was not sympathetic to vertical integration.18 More recently, antitrust authorities have been less sceptical of mergers. Indeed, the 1982 and 1992 revisions of the Department of Justice's merger guidelines created a policy environment in which mergers are less likely to be challenged, unless there are obvious anticompetitive consequences. In particular, vertical mergers are subject to less scrutiny than in earlier days. Despite this change in policy perspective, there are still some concerns that vertical mergers may facilitate collusion.19 This paper demonstrates that integration under highly concentrated conditions need not lead to higher prices, and as a consequence can benefit the consumer.