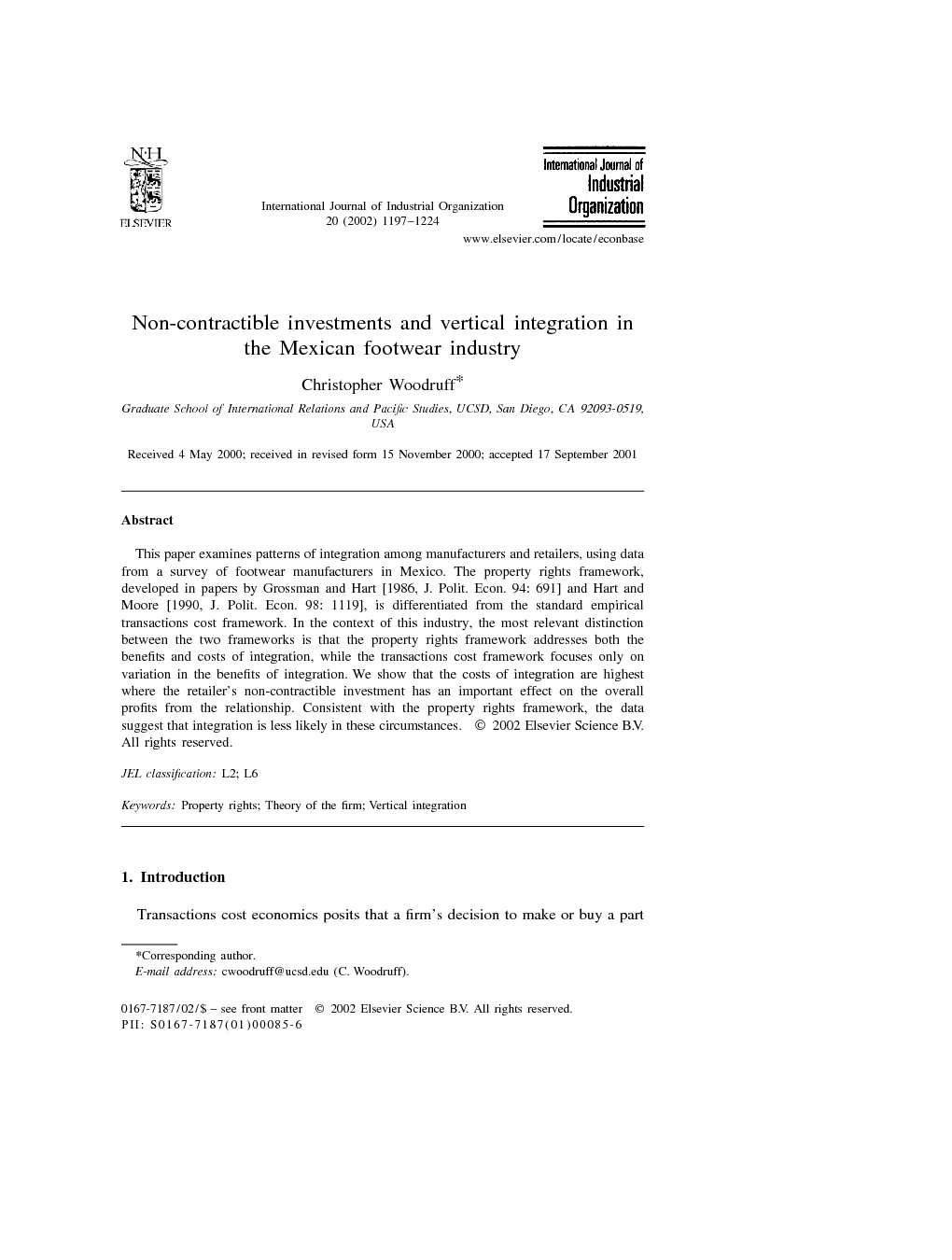 The transactions cost and property rights frameworks are differentiated by the predicted effect of increased fashion turnover on integration. Driven by an increase in the absolute level of specificity in the relationship, transactions cost predicts an increase in integration as fashion turnover increases. Driven by a change in the relative specificity and importance of marginal investments made by manufacturing and retailing managers, property rights predicts less integration as fashion turnover increases. Overall, the data provide support for the property rights framework: independent ownership is more likely in segments with high fashion turnover. While the negative relationship between fashion turnover is and integration is consistently negative, the finding is statistically significant only in some of the specifications. The negative association is not significant, for example, in a randomly selected subsample. The other empirical findings-increased integration among producers of heterogeneous goods and goods using higher quality materials — are consistent with either framework. These findings suggest it is important to consider how the costs of integration vary in the data. Previous empirical work in transactions cost has focused exclusively on variation in the benefits of integration. The importance of the retailer’s investment in high fashion segments of the industry drives the results. This depends upon the particular characteristics of the industry — a very large number of manufacturers, most of small size (fewer than 100 workers), and an even larger number of mostly independently owned retail stores. This structure is quite different from the footwear industry in the United States, for example, which is characterized by a much smaller number of large manufacturers. In the US market, where the manufacturer’s brand name is much better known, the retailer’s investment in building a client base is likely to be less important. Nevertheless, the conclusion that retailers need stronger incentives in situations where their investments are more important may apply to other industries, such as art galleries or high end restaurants. Where investments in building a client base are important, both vertical and horizontal integration should be less frequent. Brickley et al. (2000) provide some additional support for this conclusion, showing that the importance of local knowledge is an important determinant of bank branch ownership in Texas. There are, of course, many alternative explanations for integration. One alternative rationale for integration is examined in Shepard (1993), who looks at vertical integration in the gasoline market under the assumption that firms integrate to avoid double markup pricing. From this perspective, differences in demand elasticities across segments could generate a pattern of integration incentives. No measures of demand elasticities in the various segments are available. Greater heterogeneity might well imply less substitutability between goods (and lower elasticities) in women and dress segments, which might produce the higher integration found in those segments. However, differentiation across time, measured by fashion turnover, should also result in lower demand elasticities and an incentive to integrate. The data here suggest the opposite. Agency theory provides another explanation.25 The agency literature views ownership as the right to the residual profit stream from an asset, and generates integration from the need to provide profit incentives. Grossman and Hart assumes away agency considerations with a claim that integration does not make available any new contracts. An integrated manufacturer can pay his retail manager the profit stream of the retail store without selling the store to her. If in practice profit streams and asset ownership are correlated, then it may be that the integration measure here is proxying for lower powered incentives for the retailer. But for agency theory to explain the patterns in the data, monitoring the retailer would have to be easier in the heterogeneous segments than in the homogeneous segments. This seems unlikely, though no direct evidence is available. The industry demonstrates that the property rights framework can lead to patterns of integration different from those identified by the transactions cost framework, especially as the latter has been developed in the empirical literature. The exercise also demonstrates the difficulty in matching the specific components of the property rights model to a real world setting. Detailed information about the structure of trade in an industry is required. Some part of the required information must be gathered in a qualitative manner, making replication more difficult. Nevertheless, the attention which the Grossman/Hart and Hart/Moore papers have received, further empirical evidence, such as that provided by Baker and Hubbard (2000), is needed.