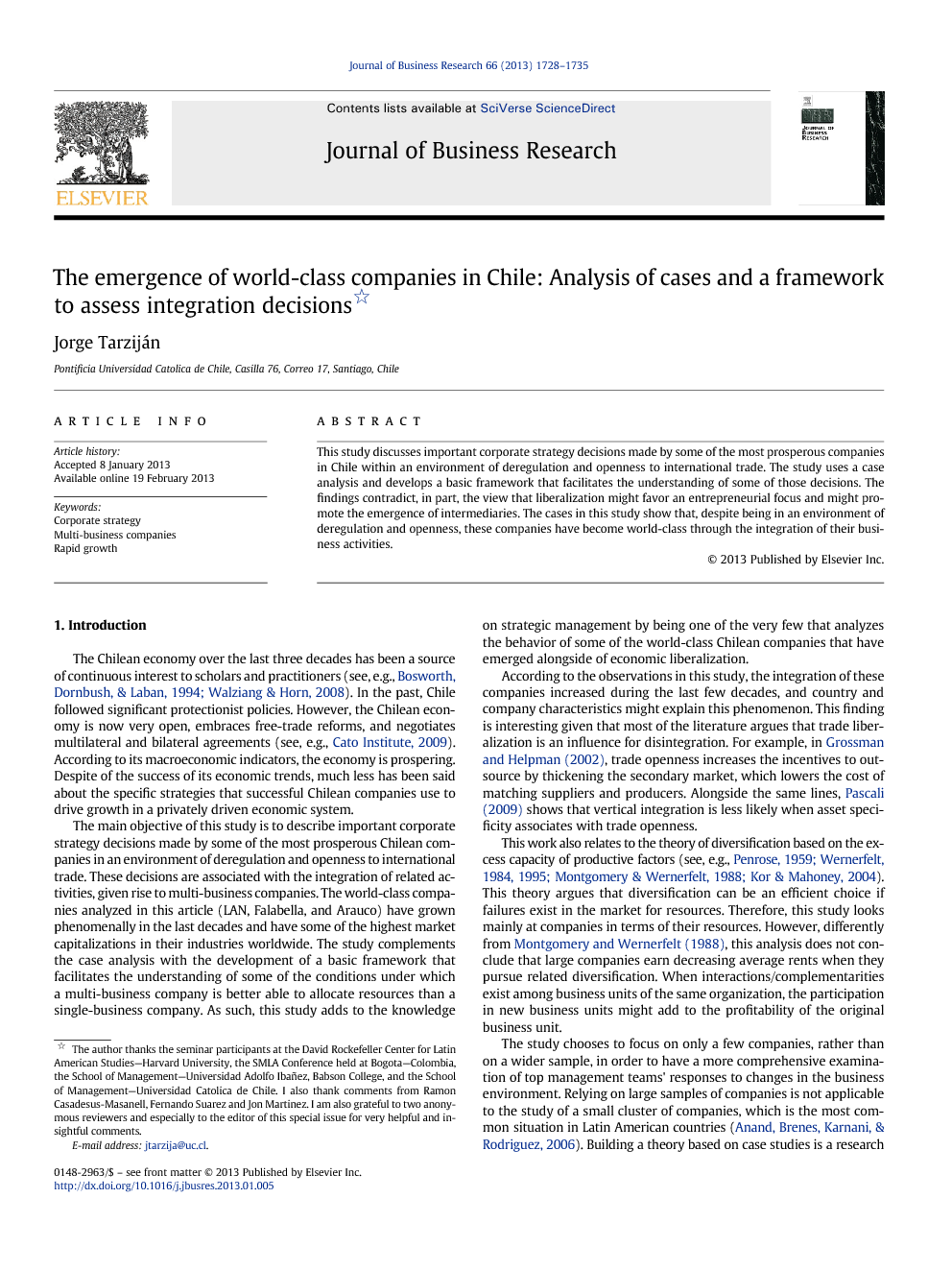 This study discusses important corporate strategy decisions made by some of the most prosperous companies in Chile within an environment of deregulation and openness to international trade. The study uses a case analysis and develops a basic framework that facilitates the understanding of some of those decisions. The findings contradict, in part, the view that liberalization might favor an entrepreneurial focus and might promote the emergence of intermediaries. The cases in this study show that, despite being in an environment of deregulation and openness, these companies have become world-class through the integration of their business activities.

The Chilean economy over the last three decades has been a source of continuous interest to scholars and practitioners (see, e.g., Bosworth et al., 1994 and Walziang and Horn, 2008). In the past, Chile followed significant protectionist policies. However, the Chilean economy is now very open, embraces free-trade reforms, and negotiates multilateral and bilateral agreements (see, e.g., Cato Institute, 2009). According to its macroeconomic indicators, the economy is prospering. Despite of the success of its economic trends, much less has been said about the specific strategies that successful Chilean companies use to drive growth in a privately driven economic system. The main objective of this study is to describe important corporate strategy decisions made by some of the most prosperous Chilean companies in an environment of deregulation and openness to international trade. These decisions are associated with the integration of related activities, given rise to multi-business companies. The world-class companies analyzed in this article (LAN, Falabella, and Arauco) have grown phenomenally in the last decades and have some of the highest market capitalizations in their industries worldwide. The study complements the case analysis with the development of a basic framework that facilitates the understanding of some of the conditions under which a multi-business company is better able to allocate resources than a single-business company. As such, this study adds to the knowledge on strategic management by being one of the very few that analyzes the behavior of some of the world-class Chilean companies that have emerged alongside of economic liberalization. According to the observations in this study, the integration of these companies increased during the last few decades, and country and company characteristics might explain this phenomenon. This finding is interesting given that most of the literature argues that trade liberalization is an influence for disintegration. For example, in Grossman and Helpman (2002), trade openness increases the incentives to outsource by thickening the secondary market, which lowers the cost of matching suppliers and producers. Alongside the same lines, Pascali (2009) shows that vertical integration is less likely when asset specificity associates with trade openness. This work also relates to the theory of diversification based on the excess capacity of productive factors (see, e.g., Penrose, 1959, Wernerfelt, 1984, Wernerfelt, 1995, Montgomery and Wernerfelt, 1988 and Kor and Mahoney, 2004). This theory argues that diversification can be an efficient choice if failures exist in the market for resources. Therefore, this study looks mainly at companies in terms of their resources. However, differently from Montgomery and Wernerfelt (1988), this analysis does not conclude that large companies earn decreasing average rents when they pursue related diversification. When interactions/complementarities exist among business units of the same organization, the participation in new business units might add to the profitability of the original business unit. The study chooses to focus on only a few companies, rather than on a wider sample, in order to have a more comprehensive examination of top management teams' responses to changes in the business environment. Relying on large samples of companies is not applicable to the study of a small cluster of companies, which is the most common situation in Latin American countries (Anand, Brenes, Karnani, & Rodriguez, 2006). Building a theory based on case studies is a research strategy that involves using one or more cases to create theoretical constructs, propositions, and/or midrange theory from case-based empirical evidence (Eisehardt, 1989 and Eisenhardt and Graebner, 2007). Consistent with Woodside (2010), this research involves direct observation within the environments of the case by asking case participants for explanations and interpretations of data, and analyses of written documents and natural sites. This study also relates to the literature that analyzes the relation between institutional context and company diversification. Economists have tended to view institutional contexts primarily in terms of the extent to which the presence of specialized intermediaries characterize the contexts (Spulber, 1996). Khanna and Palepu (2011) argue that intermediaries are important for companies because they might raise the willingness to pay (WTP) of consumers and lower companies' costs, whereas Williamson (1985) suggests that the optimal scope of a company is a function of ambient transaction costs and, therefore, of the extent of specialized intermediation. Khanna and Palepu (2000) argue that the gradual emergence of intermediaries will characterize the Chilean economy. This study's findings contradict this view in part. The companies analyzed in this study show that, despite being in an environment of deregulation and openness, they have become world-class through the integration of their business activities. This integration has allowed the companies to better allocate and leverage their key resources. The first possible explanation for this finding is that integration is an example of a suboptimal strategy arising from an inefficient market for corporate control, whereas the second explanation is that the deregulation of markets that are intrinsically small does not necessarily motivate the development of relevant intermediaries for companies that need to be large in order to compete internationally, encouraging company integration. The profitability of the companies analyzed here and the close monitoring of them by many institutional and private investors tend to argue against the first hypothesis. The organization of this study is as follows. After this introduction, the second section presents a basic framework to analyze the scope decisions. In the third section, we introduce the case analysis and apply the framework developed in the second section to the cases. In this section we also present a summary of the chronology of trade liberalization. Conclusions are presented in the fourth section of the article.

Significant changes in the business environment of Chile have inspired important transformations in local companies. Some of the companies that previously operated in less competitive environments have responded remarkably well and have adopted strategic actions aimed at sharpening their ability to compete in the international markets or to export their business models. One key strategic decision relates to the continuous search for the optimal scope of the company. Partly as a result of their changes in scope, many local companies have become stronger competitors as business liberalization has advanced. This study presents the case of three important Chilean companies that have become world-class players in their industries. In all the cases, these companies have grown by adopting a multi-business approach that tries to take advantage of country characteristics. The study's findings in part contradict the view that liberalization favors entrepreneurial focus and promotes the emergence of intermediaries that dis-incentivizes multi-business organizations. LAN, Falabella, and Arauco are examples of companies that, despite being in competitive sectors and in an environment of deregulation and openness to international trade, have succeeded through the integration of business activities that allow the companies better allocations of their key resources. The degree of success of these companies would have been highly doubtful if they had not adopted multi-business approaches. The lack of deep markets for intermediaries helps to explain their horizontal and vertical integration decisions to create and capture as much value as possible from the company's resources. There are some country characteristics that have supported the emergence of these world-class companies in Chile. Deregulation and openness to international trade have prepared them to compete without government subsidies and other types of external support. The small population has also obliged the companies to go international to seek different types of synergies and complementarities to be successful. But the lack of a relevant market for intermediaries for companies of such a large size has incentivized the companies to develop the needed capabilities internally through integration. As such, a number of factors exist that explain the integration decisions of these companies whose mission is to create and capture as much value as possible from their resources. These factors also partially explain why a massive emergence of this type of world-class companies does not exist in other Latin American countries. Even though in our case studies integration seems an adequate strategy to become more competitive, this study does not conclude that integration and multi-business operations are adequate corporate strategies for any company that wants to be global. Issues such as the quality and quantity of resources, the development of the market for intermediaries, the degree of information asymmetries, the size of the market, the quality of institutions, and the economies of scale and scope at the input and at the final product level are important to assess the appropriateness of a multi-business organization. There are some clear limitations to this article. First, we have used the case study approach to discuss some conceptual managerial issues. However, further research needs to be done to show whether a wider selection of companies (hopefully from other Latin American countries) confirms the main findings of this study. Secondly, the context (economic, social, and environmental) might vary significantly across companies, industries, and countries. As such, studies that perform more comparisons will provide deeper insight into the determinants of entrepreneurial success and its relation to countrywide effects. Our final thought is that, in terms of global expansion, numerous possibilities for growth still exist that Chilean companies have yet to seize. The companies analyzed in these articles show that the possibility exists for Chilean companies to become world-class players in competitive global industries but that to do so they need to have a business model that overcomes potential restrictions.