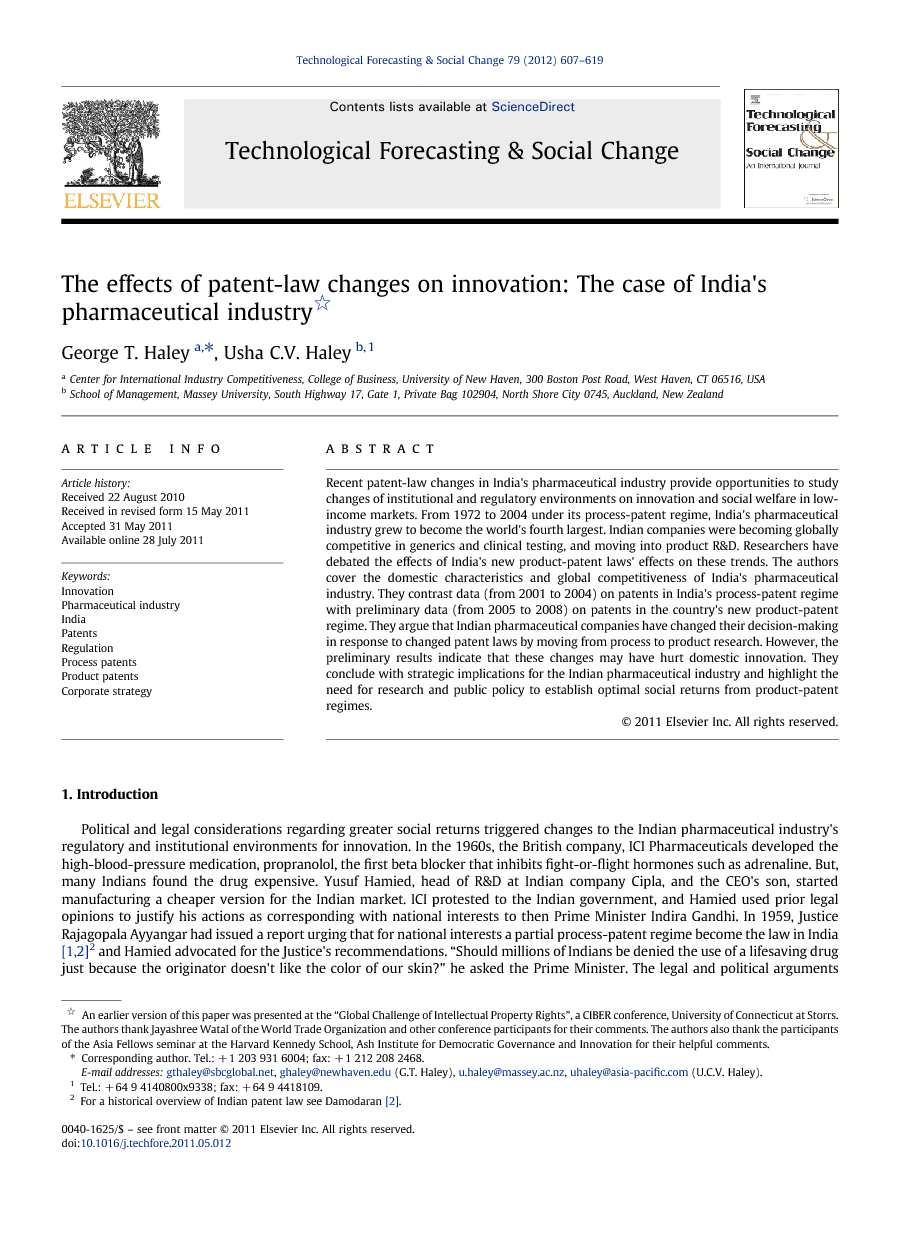 Recent patent-law changes in India's pharmaceutical industry provide opportunities to study changes of institutional and regulatory environments on innovation and social welfare in low-income markets. From 1972 to 2004 under its process-patent regime, India's pharmaceutical industry grew to become the world's fourth largest. Indian companies were becoming globally competitive in generics and clinical testing, and moving into product R&D. Researchers have debated the effects of India's new product-patent laws' effects on these trends. The authors cover the domestic characteristics and global competitiveness of India's pharmaceutical industry. They contrast data (from 2001 to 2004) on patents in India's process-patent regime with preliminary data (from 2005 to 2008) on patents in the country's new product-patent regime. They argue that Indian pharmaceutical companies have changed their decision-making in response to changed patent laws by moving from process to product research. However, the preliminary results indicate that these changes may have hurt domestic innovation. They conclude with strategic implications for the Indian pharmaceutical industry and highlight the need for research and public policy to establish optimal social returns from product-patent regimes.

Political and legal considerations regarding greater social returns triggered changes to the Indian pharmaceutical industry's regulatory and institutional environments for innovation. In the 1960s, the British company, ICI Pharmaceuticals developed the high-blood-pressure medication, propranolol, the first beta blocker that inhibits fight-or-flight hormones such as adrenaline. But, many Indians found the drug expensive. Yusuf Hamied, head of R&D at Indian company Cipla, and the CEO's son, started manufacturing a cheaper version for the Indian market. ICI protested to the Indian government, and Hamied used prior legal opinions to justify his actions as corresponding with national interests to then Prime Minister Indira Gandhi. In 1959, Justice Rajagopala Ayyangar had issued a report urging that for national interests a partial process-patent regime become the law in India [1] and [2]2 and Hamied advocated for the Justice's recommendations. “Should millions of Indians be denied the use of a lifesaving drug just because the originator doesn't like the color of our skin?” he asked the Prime Minister. The legal and political arguments appeared to persuade Indira Gandhi. In 1970, she urged parliament to change the laws governing drug patents, applying the laws not to the chemical compounds themselves but to the processes used to manufacture them [3]. Until 2005, despite India's benefits as a cheap production base, the country's backward engineering of new, high-cost drugs associated with HIV/AIDS, aging, heart disease and cancer posed a significant cost for Western companies. We provide a strategic framework to understand and to test institutional and regulatory changes in India's pharmaceutical industry and propose possible effects on social welfare. Until December 31, 2004, India's regulatory and institutional environments in pharmaceuticals and agro-chemicals limited patent protection to providing exclusive rights only to processes through which the products were produced, rather than to the products. These environments allowed India's innovative, high-quality and low-cost pharmaceutical industry to develop, to produce and to sell legally in developing countries, low-cost Indian versions of high-cost Western pharmaceuticals without patent infringement. Indian companies had the legal rights to produce and to sell drugs if their processes to produce the drugs differed sufficiently from the original patent holders' processes [4]. On January 1, 2005, to meet the requirements for membership in the World Trade Organization (WTO), India transitioned to a product-patent regime. This regulatory and institutional change provides an opportunity for an early test of the premise that product-patent regimes promote innovation. Unlike many other Asian countries, India's institutional and regulatory environments should promote product patents: India has a long legal history for both its legal system and patent law, as it inherited both from the British. India adopted its first patent law in 1856 [5]. Also, unlike other Asian former-British colonies, upon gaining independence in 1947, India adopted, and has maintained, a secular, democratic, political system. Other countries with recent histories of both rule of law and patent law, such as Poland, have also recently switched from process-patent to product-patent regimes. Yet, unlike India, most of these other countries had communist governments which did not recognize Western patents; and, again, unlike India, most of their governments controlled and directed pharmaceutical research, production and distribution. Hence, India provides a close-to-ideal legal jurisdiction to test previously untested claims that pharmaceutical product-patent regimes result in greater rates of innovation, which in turn can improve social health and can contribute to greater social welfare and returns. Fig. 1 frames generally accepted axioms and tacit theories on normative relationships between institutional environments, patent regimes, innovation and social welfare. Historically, pharmaceutical drugs have had weaker patent protection in many countries than electrical or mechanical innovations [6]. Yet, normative understandings of ideal patent environments have shaped many regulatory developments, especially those spear headed by industrialized countries, including the WTO's Trade Related Aspects of Intellectual Property Rights (TRIPS) agreement [7].3 Our study concentrates on patent regimes in India's pharmaceutical industry; additionally, we make operational Innovation as product and process patents. Reflecting the generally accepted perspectives that have shaped TRIPS, the framework portrays product-patent regimes as affecting innovation positively through protecting intellectual property rights (IPR); consequently, these regimes also affect social welfare and returns positively as innovators have greater incentives. Conversely, process-patent regimes affect innovation, social welfare and returns negatively as the benefits of investing in intellectual property do not accrue to the innovators.