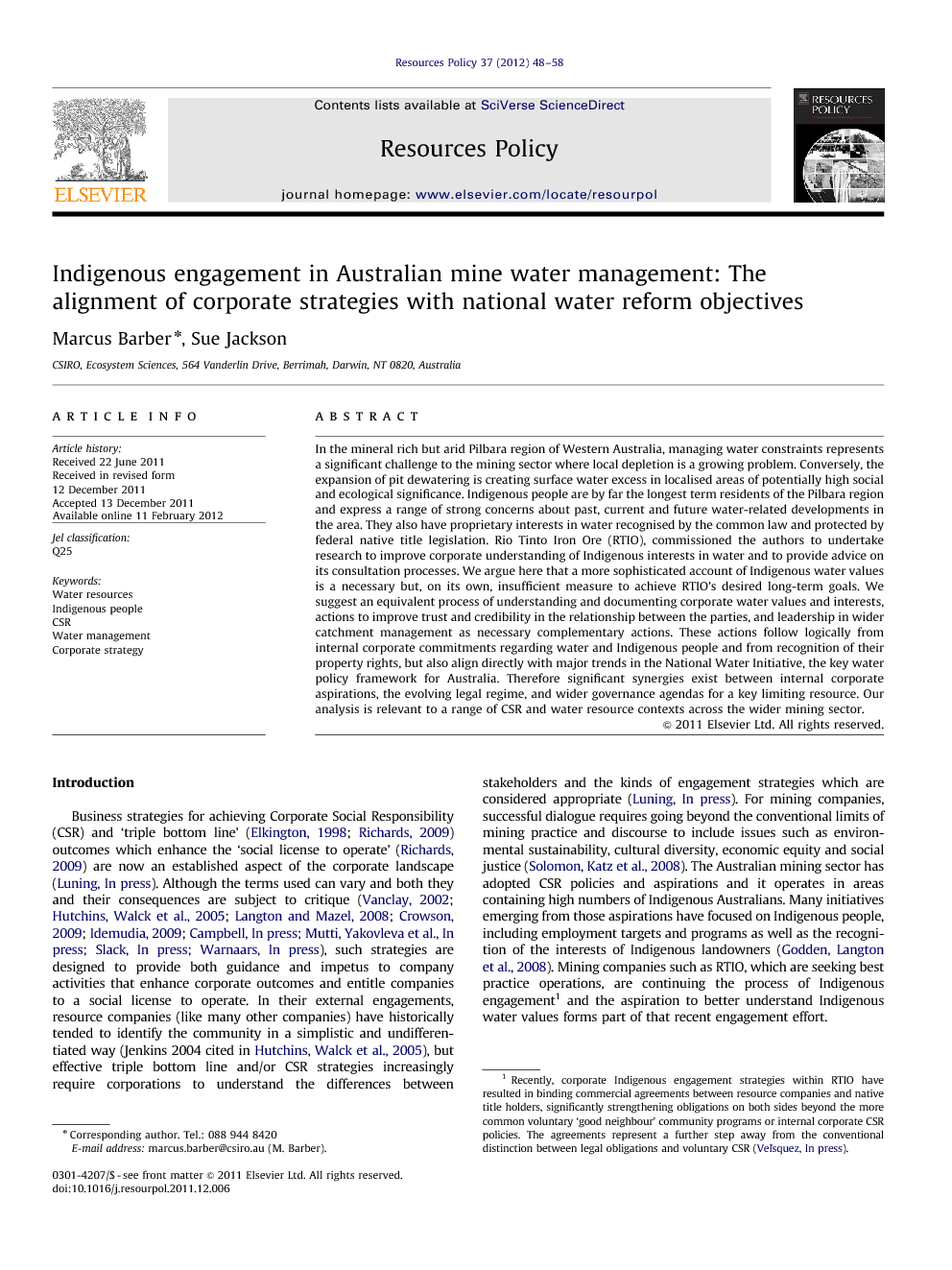 In the mineral rich but arid Pilbara region of Western Australia, managing water constraints represents a significant challenge to the mining sector where local depletion is a growing problem. Conversely, the expansion of pit dewatering is creating surface water excess in localised areas of potentially high social and ecological significance. Indigenous people are by far the longest term residents of the Pilbara region and express a range of strong concerns about past, current and future water-related developments in the area. They also have proprietary interests in water recognised by the common law and protected by federal native title legislation. Rio Tinto Iron Ore (RTIO), commissioned the authors to undertake research to improve corporate understanding of Indigenous interests in water and to provide advice on its consultation processes. We argue here that a more sophisticated account of Indigenous water values is a necessary but, on its own, insufficient measure to achieve RTIO’s desired long-term goals. We suggest an equivalent process of understanding and documenting corporate water values and interests, actions to improve trust and credibility in the relationship between the parties, and leadership in wider catchment management as necessary complementary actions. These actions follow logically from internal corporate commitments regarding water and Indigenous people and from recognition of their property rights, but also align directly with major trends in the National Water Initiative, the key water policy framework for Australia. Therefore significant synergies exist between internal corporate aspirations, the evolving legal regime, and wider governance agendas for a key limiting resource. Our analysis is relevant to a range of CSR and water resource contexts across the wider mining sector.

The research process outlined here was a preliminary scoping exercise intended to identify key Indigenous water values and interests, to provide additional expertise and ideas regarding Indigenous perspectives on water management, and to make preliminary recommendations and suggestions for further action. The process was undertaken at the request of one company operating in a single region, albeit a highly significant company in an extremely valuable mining region facing significant water management issues. However despite the limitations of the research scope, our analysis reveals the linkages between some important characteristics of Indigenous water values, potential company actions such as native title negotiations and processes to improve corporate engagement with those values, and the wider implications of that activity for water management at the site specific, catchment, regional, and national scales. Our analysis is intended to complement analyses focusing on the direct implications of Indigenous proprietary rights in water – we are identifying additional bases for corporate action flowing from pre-existing CSR commitments and from strategic corporate positioning with respect to impending changes in water regulation and governance. RTIO’s corporate strategies regarding negotiated agreements over land access, benefit sharing and heritage management have brought the parties together but they had not resulted in a clear corporate understanding of Indigenous water values and of Indigenous perspectives of mining impacts on water resources. Creating an atmosphere of reciprocity in which Indigenous values can be shared requires the company to articulate its own values and interests in Pilbara water supplies. That process in turn should lead to an understanding of the limitations of generic statements of values when they are not complemented by an ongoing process of engagement with the holders of those values, particularly when the focus is on decisions about major developments and infrastructure. The process of building trust and improving communication flow to enable the articulation and sharing of values also requires a range of simultaneous actions, including a re-evaluation of the necessity for information restrictions, attempts to widen the reach and circulation of existing publicly available information, clearly articulating existing water strategies and plans, and supporting technical and behavioural innovation in water efficiency across the business. These suggested activities are consequences of following through on internal corporate aspirations for understanding Indigenous water values and on the explicit recognition of Indigenous rights in land and water, but they also align directly with external trends in national water planning. The NWI requires increased community consultation in general and increased Indigenous engagement in particular. Actions required to facilitate Indigenous consultation processes with respect to water also provide large mining companies with opportunities to provide leadership rather than participation in catchment management processes, particularly in areas such as the Pilbara which are both water-scarce and heavily dominated by mining activity. This implication for the catchment scale also aligns directly with another emerging trend in national water management – the aspirations to integrate the mining sector and its water needs into the wider water planning and management process. Our analysis demonstrates that a serious attempt to understand Indigenous water values and interests emerging primarily from internal corporate aspirations potentially leads to a transformation in the way that companies are positioned with respect to water resources and water management issues. Undertaking this transformation would benefit local and regional Indigenous people and the immediate operational environment, but it also positions companies well to effectively engage with significant contemporary developments in national water management.