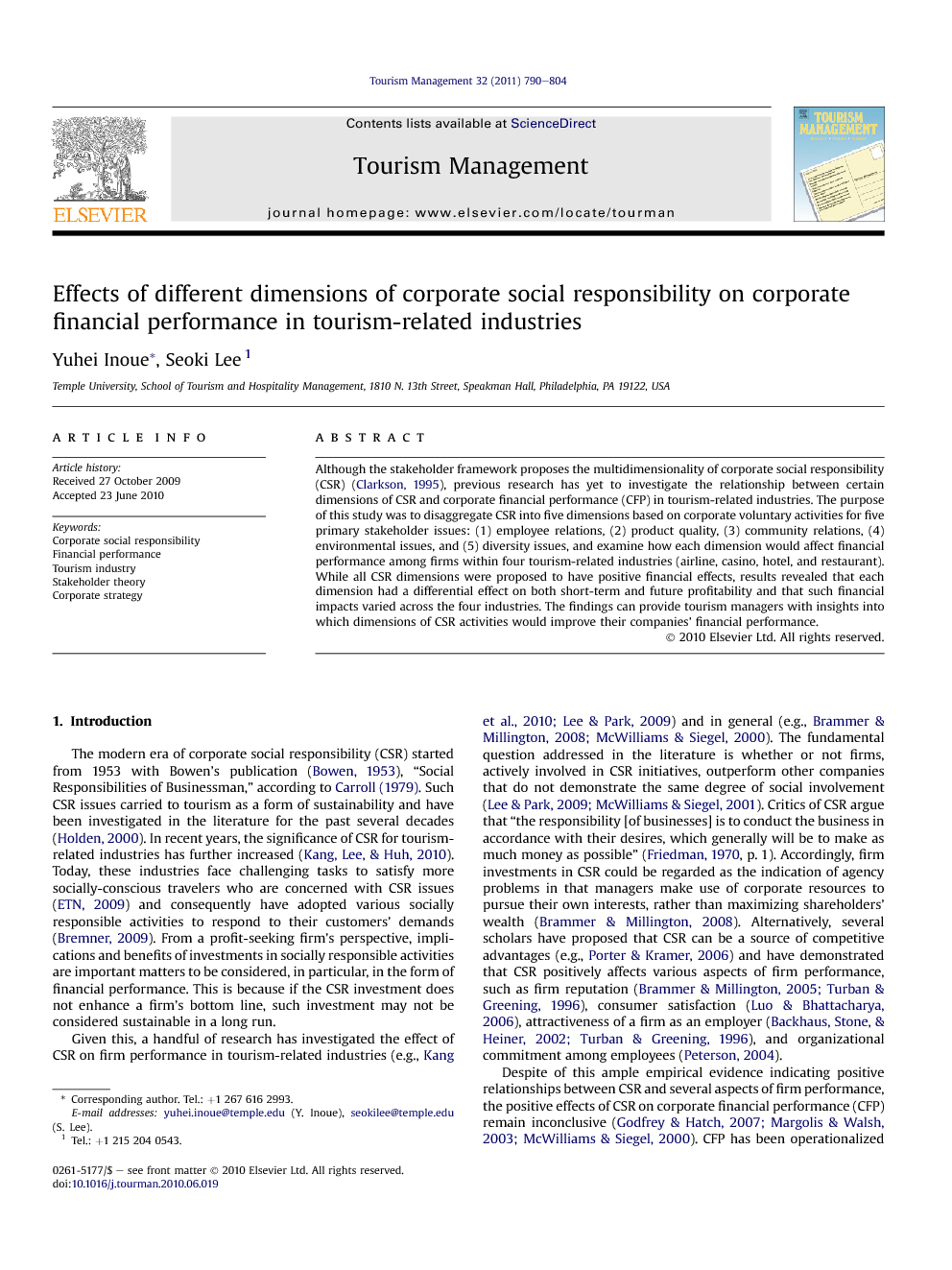 Although the stakeholder framework proposes the multidimensionality of corporate social responsibility (CSR) (Clarkson, 1995), previous research has yet to investigate the relationship between certain dimensions of CSR and corporate financial performance (CFP) in tourism-related industries. The purpose of this study was to disaggregate CSR into five dimensions based on corporate voluntary activities for five primary stakeholder issues: (1) employee relations, (2) product quality, (3) community relations, (4) environmental issues, and (5) diversity issues, and examine how each dimension would affect financial performance among firms within four tourism-related industries (airline, casino, hotel, and restaurant). While all CSR dimensions were proposed to have positive financial effects, results revealed that each dimension had a differential effect on both short-term and future profitability and that such financial impacts varied across the four industries. The findings can provide tourism managers with insights into which dimensions of CSR activities would improve their companies’ financial performance.

The modern era of corporate social responsibility (CSR) started from 1953 with Bowen’s publication (Bowen, 1953), “Social Responsibilities of Businessman,” according to Carroll (1979). Such CSR issues carried to tourism as a form of sustainability and have been investigated in the literature for the past several decades (Holden, 2000). In recent years, the significance of CSR for tourism-related industries has further increased (Kang, Lee, & Huh, 2010). Today, these industries face challenging tasks to satisfy more socially-conscious travelers who are concerned with CSR issues (ETN, 2009) and consequently have adopted various socially responsible activities to respond to their customers’ demands (Bremner, 2009). From a profit-seeking firm’s perspective, implications and benefits of investments in socially responsible activities are important matters to be considered, in particular, in the form of financial performance. This is because if the CSR investment does not enhance a firm’s bottom line, such investment may not be considered sustainable in a long run. Given this, a handful of research has investigated the effect of CSR on firm performance in tourism-related industries (e.g., Kang et al., 2010 and Lee and Park, 2009) and in general (e.g., Brammer and Millington, 2008 and McWilliams and Siegel, 2000). The fundamental question addressed in the literature is whether or not firms, actively involved in CSR initiatives, outperform other companies that do not demonstrate the same degree of social involvement (Lee and Park, 2009 and McWilliams and Siegel, 2001). Critics of CSR argue that “the responsibility [of businesses] is to conduct the business in accordance with their desires, which generally will be to make as much money as possible” (Friedman, 1970, p. 1). Accordingly, firm investments in CSR could be regarded as the indication of agency problems in that managers make use of corporate resources to pursue their own interests, rather than maximizing shareholders’ wealth (Brammer & Millington, 2008). Alternatively, several scholars have proposed that CSR can be a source of competitive advantages (e.g., Porter & Kramer, 2006) and have demonstrated that CSR positively affects various aspects of firm performance, such as firm reputation (Brammer and Millington, 2005 and Turban and Greening, 1996), consumer satisfaction (Luo & Bhattacharya, 2006), attractiveness of a firm as an employer (Backhaus et al., 2002 and Turban and Greening, 1996), and organizational commitment among employees (Peterson, 2004). Despite of this ample empirical evidence indicating positive relationships between CSR and several aspects of firm performance, the positive effects of CSR on corporate financial performance (CFP) remain inconclusive (Godfrey and Hatch, 2007, Margolis and Walsh, 2003 and McWilliams and Siegel, 2000). CFP has been operationalized in terms of a company’s market value or short-term profitability (Schuler & Cording, 2006). To date, over a hundred studies have investigated the link between CSR and CFP (Margolis & Walsh, 2003). However, the literature has yielded mixed sets of results, including positive, negative, or neutral relationships, and thereby demonstrates no agreement on whether or not high CSR activity leads to improved CFP (Margolis and Walsh, 2003 and McWilliams and Siegel, 2000). To explain these inconclusive results, several meta-analytic reviews have attempted to identify methodological issues in the extant CSR–CFP studies (Godfrey and Hatch, 2007, Griffin and Mahon, 1997, Margolis and Walsh, 2003 and McWilliams and Siegel, 2000). In particular, Godfrey and Hatch (2007) pointed out three key issues that remain unresolved: the use of multi-industry samples, cross-sectional observations, and the aggregation of different CSR dimensions (e.g., natural environment, employee relations, and community involvement). Given these issues, Godfrey and Hatch further suggested that future research should investigate a long-term relationship between CSR and CFP within a single industry using disaggregated CSR measures. Such investigations are important because “industries exhibit special uniqueness in that the internal competencies or external pressures inherent in the industry create a ‘specialization’ of social interests” (Griffin & Mahon, 1997, p. 10). That is, since each industry faces unique social interests and issues based on internal and external environments, financial returns that a firm gains from a certain dimension of CSR activity may differ depending on the specific industry (Godfrey and Hatch, 2007 and Griffin and Mahon, 1997). Consequently, a need exists to ascertain how a company’s involvement in different CSR dimensions may affect its financial performance on an industry basis. Tourism-related companies currently engage in various CSR activities (e.g., Holcomb et al., 2007, Holden, 2000, Holden, 2003 and Robson and Robson, 1996). Some examples of these activities include community involvement, environmental management, customer relations, and employee relations (Holcomb et al., 2007). However, extant research has failed to investigate the relationship between certain dimensions of CSR activities and CFP within these firms. For example, Lee and Park (2009) used an aggregate CSR measure that combined different aspects of CSR to investigate the CSR–CFP relationship among hotel and casino companies. Furthermore, although Kang et al. (2010) separately examined the effects of positive and negative CSR activities on CFP for tourism-related industries (airline, casino, hotel, and restaurant), they did not examine how CSR effects would differ by corporate attention to specific dimensions. The purpose of this study is, therefore, to examine how different CSR dimensions would affect financial performance among firms within four tourism-related industries (airline, casino, hotel, and restaurant industries).2 More specifically, building upon the stakeholder framework proposed by Clarkson (1995), this study proposes that CSR can be divided into five different dimensions based on types of primary stakeholder issues: (1) employee relations, (2) product quality (proxy for consumer relations), (3) community relations, (4) environmental issues, and (5) diversity issues (proxy for minorities/women and suppliers). On the basis of the resource-based view (Barney, 1991) and neo-classical economic view (McWilliams & Siegel, 2000), the study further investigates whether each of the five CSR dimensions positively influence both short-term and future profitability. The current research contributes to the body of the literature by addressing all three key issues identified by Godfrey and Hatch (2007) discussed above through a long-term, industry-specific investigation using multidimensional CSR measures. Furthermore, this study provides tourism managers with clear insight into which CSR activity areas would improve their companies’ financial performance. The following section presents theoretical frameworks regarding the multidimensional structure of CSR and the link between the five CSR dimensions and CFP. Subsequently, the paper explains the methodology used in the study and provides its empirical results. This study concludes by offering practical and theoretical implications.