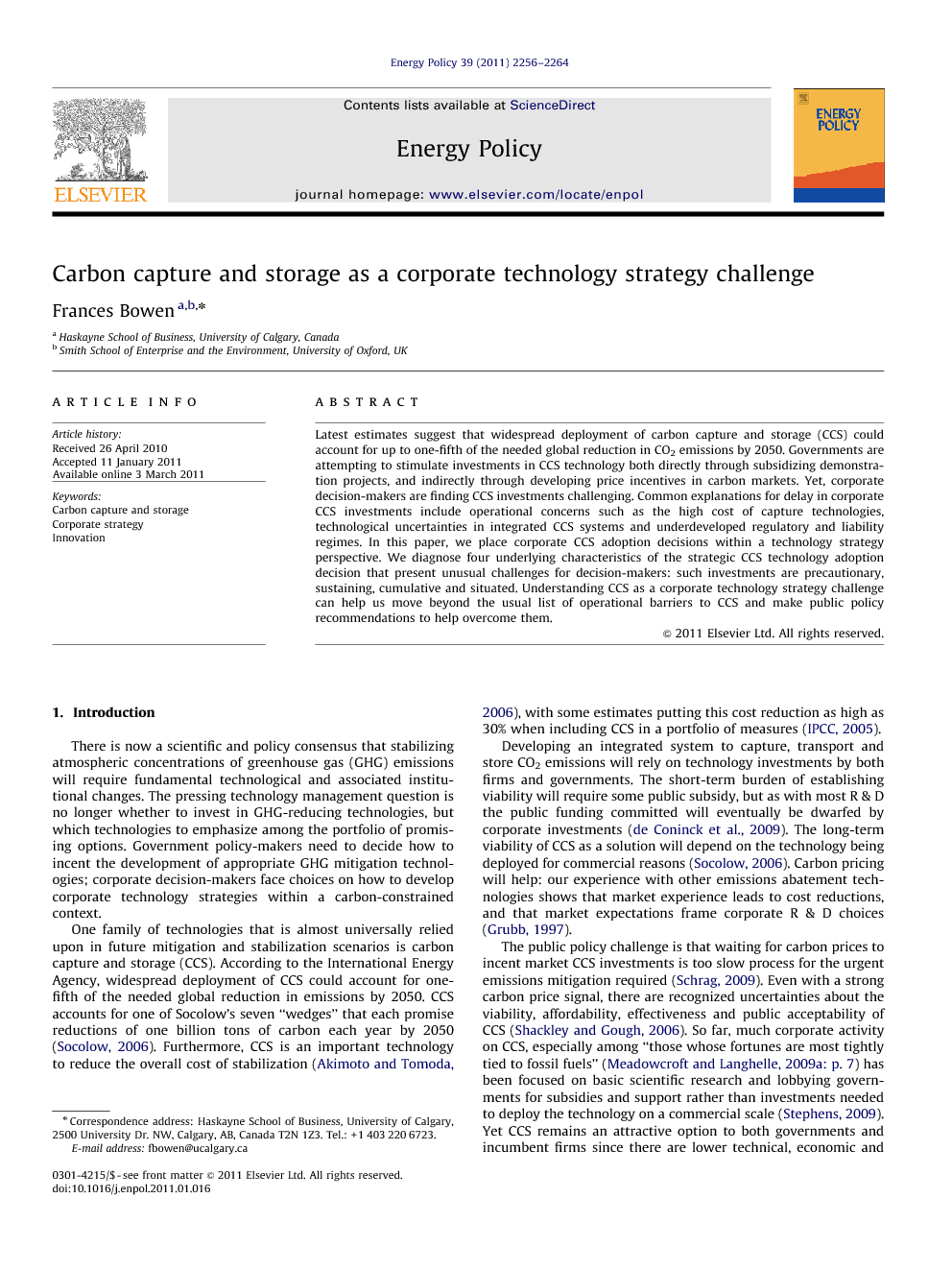 Latest estimates suggest that widespread deployment of carbon capture and storage (CCS) could account for up to one-fifth of the needed global reduction in CO2 emissions by 2050. Governments are attempting to stimulate investments in CCS technology both directly through subsidizing demonstration projects, and indirectly through developing price incentives in carbon markets. Yet, corporate decision-makers are finding CCS investments challenging. Common explanations for delay in corporate CCS investments include operational concerns such as the high cost of capture technologies, technological uncertainties in integrated CCS systems and underdeveloped regulatory and liability regimes. In this paper, we place corporate CCS adoption decisions within a technology strategy perspective. We diagnose four underlying characteristics of the strategic CCS technology adoption decision that present unusual challenges for decision-makers: such investments are precautionary, sustaining, cumulative and situated. Understanding CCS as a corporate technology strategy challenge can help us move beyond the usual list of operational barriers to CCS and make public policy recommendations to help overcome them.

There is now a scientific and policy consensus that stabilizing atmospheric concentrations of greenhouse gas (GHG) emissions will require fundamental technological and associated institutional changes. The pressing technology management question is no longer whether to invest in GHG-reducing technologies, but which technologies to emphasize among the portfolio of promising options. Government policy-makers need to decide how to incent the development of appropriate GHG mitigation technologies; corporate decision-makers face choices on how to develop corporate technology strategies within a carbon-constrained context. One family of technologies that is almost universally relied upon in future mitigation and stabilization scenarios is carbon capture and storage (CCS). According to the International Energy Agency, widespread deployment of CCS could account for one-fifth of the needed global reduction in emissions by 2050. CCS accounts for one of Socolow's seven “wedges” that each promise reductions of one billion tons of carbon each year by 2050 (Socolow, 2006). Furthermore, CCS is an important technology to reduce the overall cost of stabilization (Akimoto and Tomoda, 2006), with some estimates putting this cost reduction as high as 30% when including CCS in a portfolio of measures (IPCC, 2005). Developing an integrated system to capture, transport and store CO2 emissions will rely on technology investments by both firms and governments. The short-term burden of establishing viability will require some public subsidy, but as with most R & D the public funding committed will eventually be dwarfed by corporate investments (de Coninck et al., 2009). The long-term viability of CCS as a solution will depend on the technology being deployed for commercial reasons (Socolow, 2006). Carbon pricing will help: our experience with other emissions abatement technologies shows that market experience leads to cost reductions, and that market expectations frame corporate R & D choices (Grubb, 1997). The public policy challenge is that waiting for carbon prices to incent market CCS investments is too slow process for the urgent emissions mitigation required (Schrag, 2009). Even with a strong carbon price signal, there are recognized uncertainties about the viability, affordability, effectiveness and public acceptability of CCS (Shackley and Gough, 2006). So far, much corporate activity on CCS, especially among “those whose fortunes are most tightly tied to fossil fuels” (Meadowcroft and Langhelle, 2009a: p. 7) has been focused on basic scientific research and lobbying governments for subsidies and support rather than investments needed to deploy the technology on a commercial scale (Stephens, 2009). Yet CCS remains an attractive option to both governments and incumbent firms since there are lower technical, economic and social barriers to lowering CO2 emissions by modifying existing industrial processes and electricity generation than by more radical low carbon solutions (Gibbins et al., 2006). There has been a recent flurry of research effort – both in this journal and elsewhere – that places CCS technology investments within a broader political (e.g. Meadowcroft and Langhelle, 2009a and Meadowcroft and Langhelle, 2009b), socio-technical (e.g. Stephens and Jiusto, 2010) or innovation (Praetorius and Schumacher, 2009) system. A parallel literature is being developed on how and why firms differ in their climate change innovation strategies (e.g. Pinkse and Kolk, 2010) or preparations for energy futures (e.g. Chang and Yong, 2007). Some studies have included industry perspectives in panels of experts on CCS (e.g. Hansson and Bryngelsson, 2009; Dapeng and Weiwei, 2009). However, so far the strategic decisions of the primary CCS technology consumers – the industrial users of CCS technologies – on whether and how to invest in CCS technologies have been neglected. While we have a long list of potential operational barriers to CCS adoption, we have not yet placed these in the context of adopting firms' corporate technology strategy. In this paper, we develop a corporate technology strategy perspective on CCS investments to diagnose the investment challenges of CCS, and potential solutions to those challenges. We begin with a brief introduction to CCS technologies and to corporate technology strategy, before outlining four distinctive challenges of CCS for corporate strategists. CCS investments are precautionary, sustaining, cumulative and situated. We aim to show that adopting a corporate technology strategy perspective provides both corporate decision-makers and public policy-makers with a more nuanced understanding of the barriers to CCS investments and potential ways to overcome them.