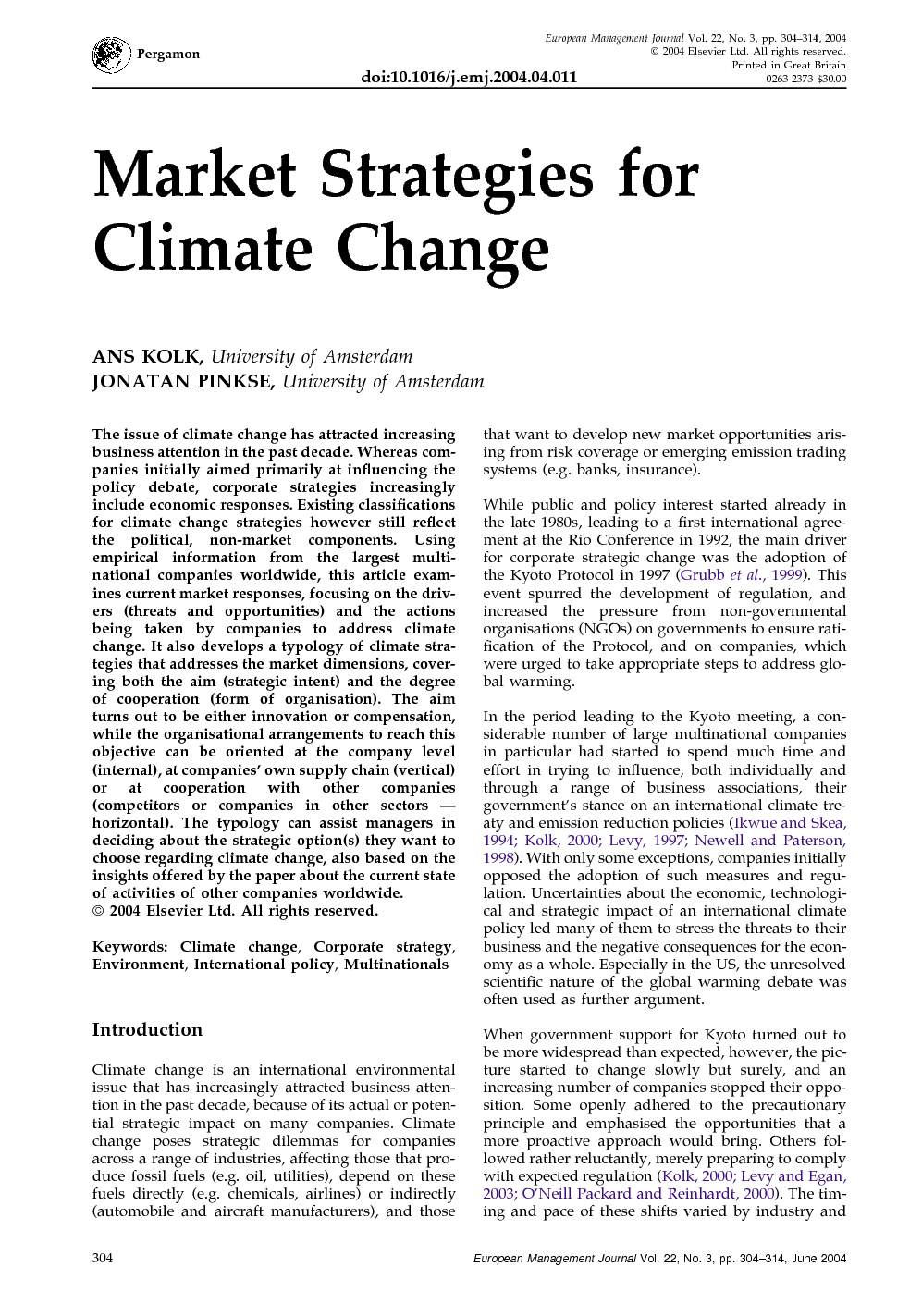 The issue of climate change has attracted increasing business attention in the past decade. Whereas companies initially aimed primarily at influencing the policy debate, corporate strategies increasingly include economic responses. Existing classifications for climate change strategies however still reflect the political, non-market components. Using empirical information from the largest multinational companies worldwide, this article examines current market responses, focusing on the drivers (threats and opportunities) and the actions being taken by companies to address climate change. It also develops a typology of climate strategies that addresses the market dimensions, covering both the aim (strategic intent) and the degree of cooperation (form of organisation). The aim turns out to be either innovation or compensation, while the organisational arrangements to reach this objective can be oriented at the company level (internal), at companies’ own supply chain (vertical) or at cooperation with other companies (competitors or companies in other sectors — horizontal). The typology can assist managers in deciding about the strategic option(s) they want to choose regarding climate change, also based on the insights offered by the paper about the current state of activities of other companies worldwide.

Climate change is an international environmental issue that has increasingly attracted business attention in the past decade, because of its actual or potential strategic impact on many companies. Climate change poses strategic dilemmas for companies across a range of industries, affecting those that produce fossil fuels (e.g. oil, utilities), depend on these fuels directly (e.g. chemicals, airlines) or indirectly (automobile and aircraft manufacturers), and those that want to develop new market opportunities arising from risk coverage or emerging emission trading systems (e.g. banks, insurance). While public and policy interest started already in the late 1980s, leading to a first international agreement at the Rio Conference in 1992, the main driver for corporate strategic change was the adoption of the Kyoto Protocol in 1997 (Grubb et al., 1999). This event spurred the development of regulation, and increased the pressure from non-governmental organisations (NGOs) on governments to ensure ratification of the Protocol, and on companies, which were urged to take appropriate steps to address global warming. In the period leading to the Kyoto meeting, a considerable number of large multinational companies in particular had started to spend much time and effort in trying to influence, both individually and through a range of business associations, their government’s stance on an international climate treaty and emission reduction policies (Ikwue and Skea, 1994, Kolk, 2000, Levy, 1997 and Newell and Paterson, 1998). With only some exceptions, companies initially opposed the adoption of such measures and regulation. Uncertainties about the economic, technological and strategic impact of an international climate policy led many of them to stress the threats to their business and the negative consequences for the economy as a whole. Especially in the US, the unresolved scientific nature of the global warming debate was often used as further argument. When government support for Kyoto turned out to be more widespread than expected, however, the picture started to change slowly but surely, and an increasing number of companies stopped their opposition. Some openly adhered to the precautionary principle and emphasised the opportunities that a more proactive approach would bring. Others followed rather reluctantly, merely preparing to comply with expected regulation (Kolk, 2000, Levy and Egan, 2003 and O’Neill Packard and Reinhardt, 2000). The timing and pace of these shifts varied by industry and country of origin. Early proponents could be found in those sectors where market chances were quickly discovered, or where the risks of climate change prevailed. In the automotive and oil industries, companies from European countries changed positions much earlier than their US counterparts (Kolk and Levy, 2001, Kolk and Levy, 2004 and Levy and Rothenberg, 2002). As the climate issue matured, however, more companies adopted proactive climate strategies. Corporate support for climate measures became evident in the wave of activities and initiatives to reduce emissions, through product and process improvements, cooperation with other companies, government agencies and NGOs to exchange technologies and expertise, and the exploration of options such as emission trading (e.g. Dunn, 2002, Rosenzweig et al., 2002 and Whittaker et al., 2003). A decade of business interest in climate change has thus led to a clear shift in the strategies adopted. While political, non-market, strategies predominated in the first half of the 1990s, the market component is clearly increasing in importance (Baron, 1995 and Levy and Kolk, 2002). At the same time, however, the fact that large companies operate in a range of countries with sometimes different climate policies (Hamilton et al., 2003 and Schreurs, 2003) means that the more multi-domestic non-market strategies (Baron, 1997) continue to have an impact. But in the firm-specific blend of market and non-market strategies in the field of climate change, the former is currently receiving more attention. However, existing classifications for climate change strategies, developed concurrent with corporate (political) activity in the 1990s, are not yet able to grasp the new realities properly. This paper introduces an adjusted typology, paying specific attention to the market components related to climate change. To this end, it examines empirical information from the largest multinationals worldwide, derived from a questionnaire, to explore the main elements of current corporate activity on climate change. On the basis of this analysis, the dominant distinguishing peculiarities are subsequently induced and a typology is presented. First, however, and before moving to the sample and data analysis, the next section briefly discusses the climate strategy classifications that have been developed and used so far.

The objective of this paper was to examine several notable trends with respect to companies’ market activities for climate change, and to identify the strategies they are developing, relevant to both academics and practitioners. Different approaches seem to have emerged, as noted in Table 1. These strategies differ in their aim (strategic intent) and degree of cooperation (form of organisation). The typology can assist managers in deciding about the strategic option(s) they want to choose regarding climate change, with regard to the choice between innovating or compensating; and concerning the extent to which they want to focus on their own operations only, and/or also cooperate in the supply chain, or even beyond that. The paper’s analysis of the current state of climate change activities by major multinational companies can be used as further input for such a decision-making process. For practitioners, more insights into the emergent strategies and the options with regard to climate change will be helpful in developing and/or adjusting managerial and policy-making activities. The current situation is that most companies have already made an inventory of their GHG emissions. With respect to the measures being taken (see Figure 2), most companies focus on internally-oriented measures that improve energy efficiency of their business processes. At the same time, however, a growing number are exploring possibilities to integrate the supply chain in its climate strategy and develop new (energy-efficient) products. Current regulatory developments also stimulate companies to look for solutions that stretch even further, through partnerships and participation in emission markets. The underlying trend is that companies increase the degree of cooperation by broadening their strategic scope regarding climate change. Whether companies aim at innovation or compensation remains a much more open question, which will partly rely on the (international) development of policy measures on climate change. Companies’ means to compensate for their own emissions are currently still limited, because of the immature state of emission markets and offset projects. The location and geographical spread of companies also influence the extent to which this option will be(come) available. As the content analysis in this paper has shown, industry peculiarities play a role in the responses formulated by companies, but mainly shape the type of debate on climate change. The analysis of the concrete actions taken to reduce GHG emissions reveals a much less pronounced industry effect. Table 1 shows that the characteristics of the target-setting process and the internal measures reflect relatively sharp distinctions between sectors, but that these distinctions become more diffuse in the case of measures with a broader scope. Within each sector, companies follow rather distinctive approaches, which results in strategies that could not be explained by a sector perspective. Follow-up studies are necessary to obtain more insight into the actual positioning of different companies, and especially the determinants of these differences. These factors can be firm-specific, but also related to country of origin or location. The importance of country of origin was shown in the analysis of the sample responses. This revealed that the responding companies were not representative of the full set, and that European companies were more likely to respond to the questionnaire than Japanese and US companies respectively. This reflects the current state of the positions taken by the respective governments. It is clear that those companies that responded to the questionnaire are the most proactive with regard to market responses to climate change. To what extent country of origin also influences the contents of the specific climate strategy is an interesting area for further research. This also applies to a possible country-of-location effect, which might be expected to become more dominant when the use of market mechanisms and concomitant business involvement in emission trading increase. It is important for managers to consider not only their companies’ home-country context when designing and implementing a climate strategy. If companies are located in other countries as well, the regulatory and societal context there matters too, and should be considered — be it only because the development and applicability of new emission trading instruments and carbon tax regulations is unclear and uncertain. In addition, such a broader perspective can also help to transfer (emerging) best practices (and prevent the spread of the ‘worst’) from around the world, benefitting either from the expertise of other companies or the knowledge built up internally, in other units of the multinational company in question. This ‘learning approach’ is all the more desirable if a company explicitly and actively wants to develop its own profile and strategy for climate change.