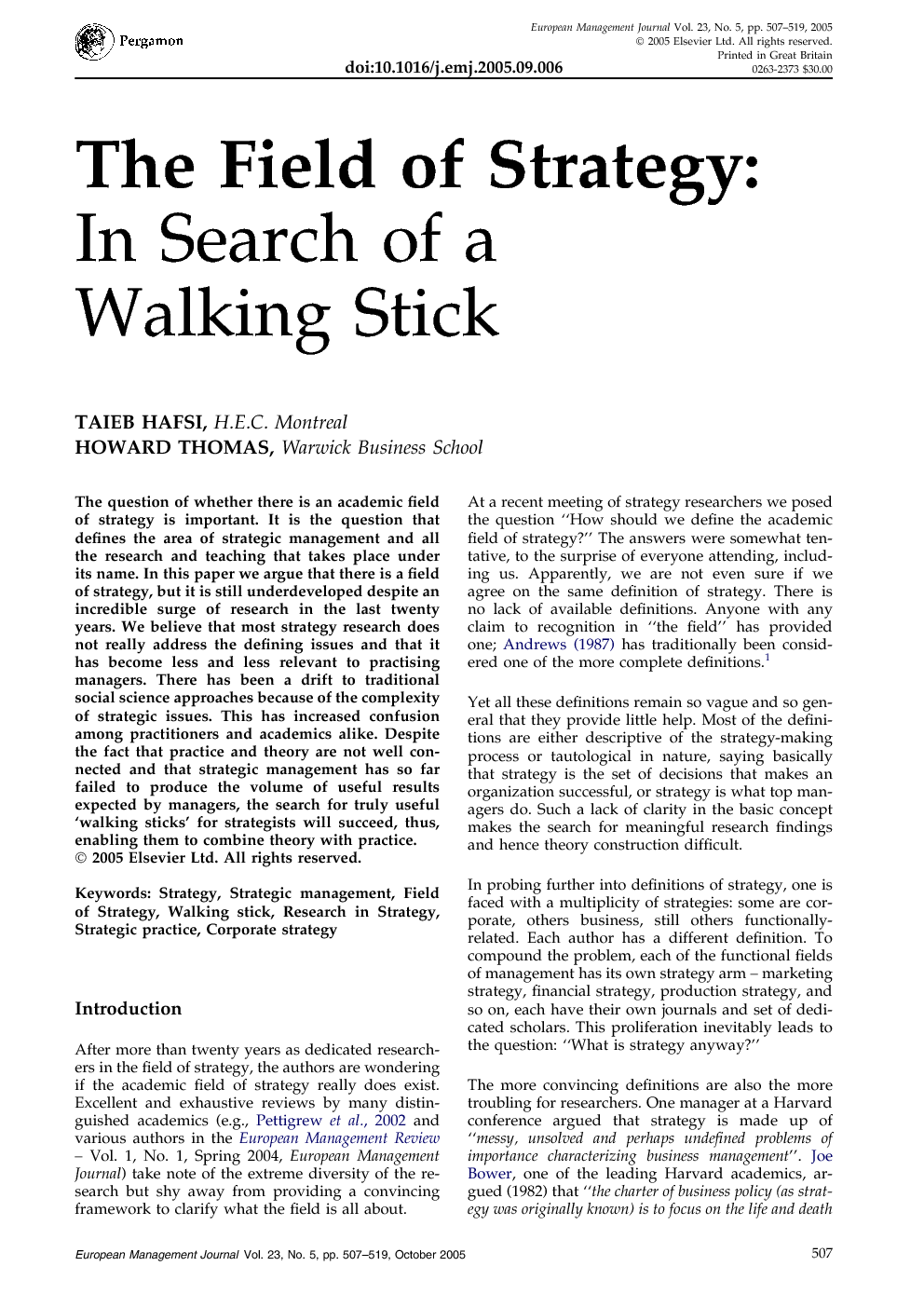 The question of whether there is an academic field of strategy is important. It is the question that defines the area of strategic management and all the research and teaching that takes place under its name. In this paper we argue that there is a field of strategy, but it is still underdeveloped despite an incredible surge of research in the last twenty years. We believe that most strategy research does not really address the defining issues and that it has become less and less relevant to practising managers. There has been a drift to traditional social science approaches because of the complexity of strategic issues. This has increased confusion among practitioners and academics alike. Despite the fact that practice and theory are not well connected and that strategic management has so far failed to produce the volume of useful results expected by managers, the search for truly useful ‘walking sticks’ for strategists will succeed, thus, enabling them to combine theory with practice.

After more than twenty years as dedicated researchers in the field of strategy, the authors are wondering if the academic field of strategy really does exist. Excellent and exhaustive reviews by many distinguished academics (e.g., Pettigrew et al., 2002 and various authors in the European Management Review – Vol. 1, No. 1, Spring 2004, European Management Journal) take note of the extreme diversity of the research but shy away from providing a convincing framework to clarify what the field is all about. At a recent meeting of strategy researchers we posed the question “How should we define the academic field of strategy?” The answers were somewhat tentative, to the surprise of everyone attending, including us. Apparently, we are not even sure if we agree on the same definition of strategy. There is no lack of available definitions. Anyone with any claim to recognition in “the field” has provided one; Andrews (1987) has traditionally been considered one of the more complete definitions.1 Yet all these definitions remain so vague and so general that they provide little help. Most of the definitions are either descriptive of the strategy-making process or tautological in nature, saying basically that strategy is the set of decisions that makes an organization successful, or strategy is what top managers do. Such a lack of clarity in the basic concept makes the search for meaningful research findings and hence theory construction difficult. In probing further into definitions of strategy, one is faced with a multiplicity of strategies: some are corporate, others business, still others functionally-related. Each author has a different definition. To compound the problem, each of the functional fields of management has its own strategy arm – marketing strategy, financial strategy, production strategy, and so on, each have their own journals and set of dedicated scholars. This proliferation inevitably leads to the question: “What is strategy anyway?” The more convincing definitions are also the more troubling for researchers. One manager at a Harvard conference argued that strategy is made up of “messy, unsolved and perhaps undefined problems of importance characterizing business management”. Joe Bower, one of the leading Harvard academics, argued (1982) that “the charter of business policy (as strategy was originally known) is to focus on the life and death issues of central interest to top management… to help top management to deal with these issues effectively, profitably, and morally.” He went so far as to say that anything that can be made orderly and systematic should be left to the functional areas and considered out of the field of strategy. The question of whether there is an academic field of strategy is important. In this paper we argue that there is a field of strategy, but it is still underdeveloped despite an incredible surge of research in the last twenty years. We believe that most strategy research does not really address the defining issues. As a result there are serious methodological deficiencies. First, and following on from the basic problem of the definition of strategy, there is no common understanding of the set of theoretical propositions in the field. Authors tend to construct their own propositions without consistency from one study to the next or one author to the next. Second, the understanding of the scope of the field, its phenomena, and its research methods are borrowed crudely from the more established social sciences. To make our argument, we go first through a historical discussion of the field’s knowledge development, describing the approaches that have dominated research, teaching, and practice. We observe that there has been a drift to the traditional social sciences because of the complexity of strategic issues. This has increased confusion among practitioners and academics alike. We argue further that the real challenge is to devise a new approach to theory-building that brings the field of strategy closer to reality. To suggest the nature of such an approach, we go back to the issues that have dominated debates among early general management scholars.

General managers cannot manage a firm for sustainable performance and survival if they focus on the specialized activities of the business functions. They are forced to integrate them to provide meaning and justify development of these functions. The concept of strategy is the traditional instrument that helps in this process. Such a model of strategy remains a “down to earth” instrument. Its general character is the source of its explanatory power and of its capacity to guide collective action. We need to go beyond the “down-to-earth” so that we can understand the patterns of strategy; so we state as the raison d’être of the field of strategy: “helping through heuristics and creative methodologies to the understanding and transformation of reality”. We fear that if research were to continue to move away from such a goal, strategic management practice would be left alone and the academic field would die. Managers would lose interest in theory that neither helps to explain reality nor facilitates action designed to influence reality. This must be a source of major concern about the future of strategy as a field of academic teaching and learned research. From the traditional academic point of view, it seems much more legitimate to simply consolidate disciplinary research on the mistaken basis that strategy research conceived in any other way looks like a pale reflection of proper academic standards. It takes deliberately deviant behaviour to innovate and resist these powerful isomorphic pressures. We should not only conceive our research better so that the understanding and transformation of reality is not relegated to the background, but becomes centre stage. Also, we should work at developing more and better ways to integrate and reconcile research findings and relate them to practice.