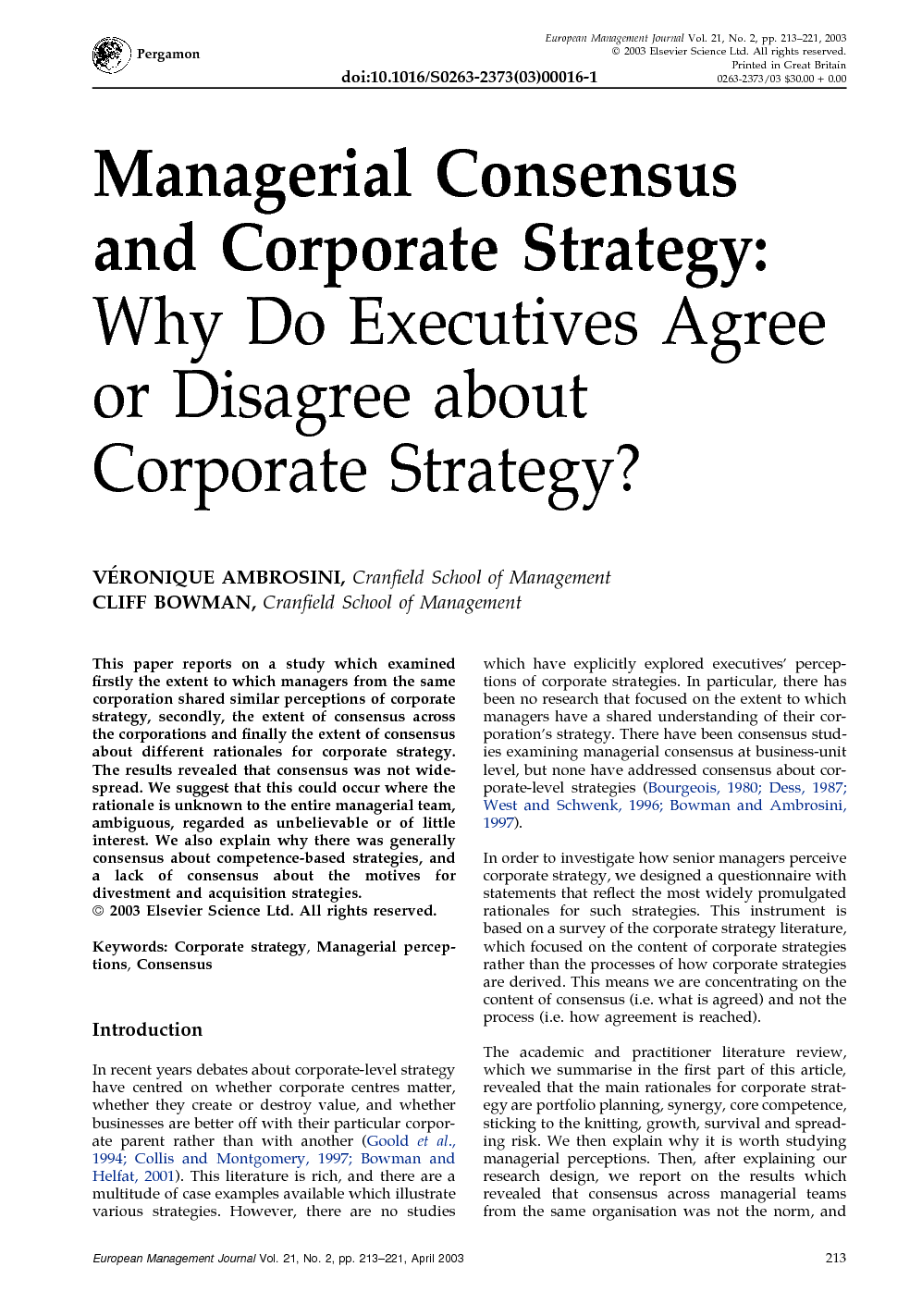 This paper reports on a study which examined firstly the extent to which managers from the same corporation shared similar perceptions of corporate strategy, secondly, the extent of consensus across the corporations and finally the extent of consensus about different rationales for corporate strategy. The results revealed that consensus was not widespread. We suggest that this could occur where the rationale is unknown to the entire managerial team, ambiguous, regarded as unbelievable or of little interest. We also explain why there was generally consensus about competence-based strategies, and a lack of consensus about the motives for divestment and acquisition strategies.

In recent years debates about corporate-level strategy have centred on whether corporate centres matter, whether they create or destroy value, and whether businesses are better off with their particular corporate parent rather than with another (Goold et al., 1994, Collis and Montgomery, 1997 and Bowman and Helfat, 2001). This literature is rich, and there are a multitude of case examples available which illustrate various strategies. However, there are no studies which have explicitly explored executives’ perceptions of corporate strategies. In particular, there has been no research that focused on the extent to which managers have a shared understanding of their corporation’s strategy. There have been consensus studies examining managerial consensus at business-unit level, but none have addressed consensus about corporate-level strategies (Bourgeois, 1980, Dess, 1987, West and Schwenk, 1996 and Bowman and Ambrosini, 1997). In order to investigate how senior managers perceive corporate strategy, we designed a questionnaire with statements that reflect the most widely promulgated rationales for such strategies. This instrument is based on a survey of the corporate strategy literature, which focused on the content of corporate strategies rather than the processes of how corporate strategies are derived. This means we are concentrating on the content of consensus (i.e. what is agreed) and not the process (i.e. how agreement is reached). The academic and practitioner literature review, which we summarise in the first part of this article, revealed that the main rationales for corporate strategy are portfolio planning, synergy, core competence, sticking to the knitting, growth, survival and spreading risk. We then explain why it is worth studying managerial perceptions. Then, after explaining our research design, we report on the results which revealed that consensus across managerial teams from the same organisation was not the norm, and that there were similarities across corporations about what strategies managers were most likely to agree about, and which were likely to display disagreement. The last part of the paper discusses these results.