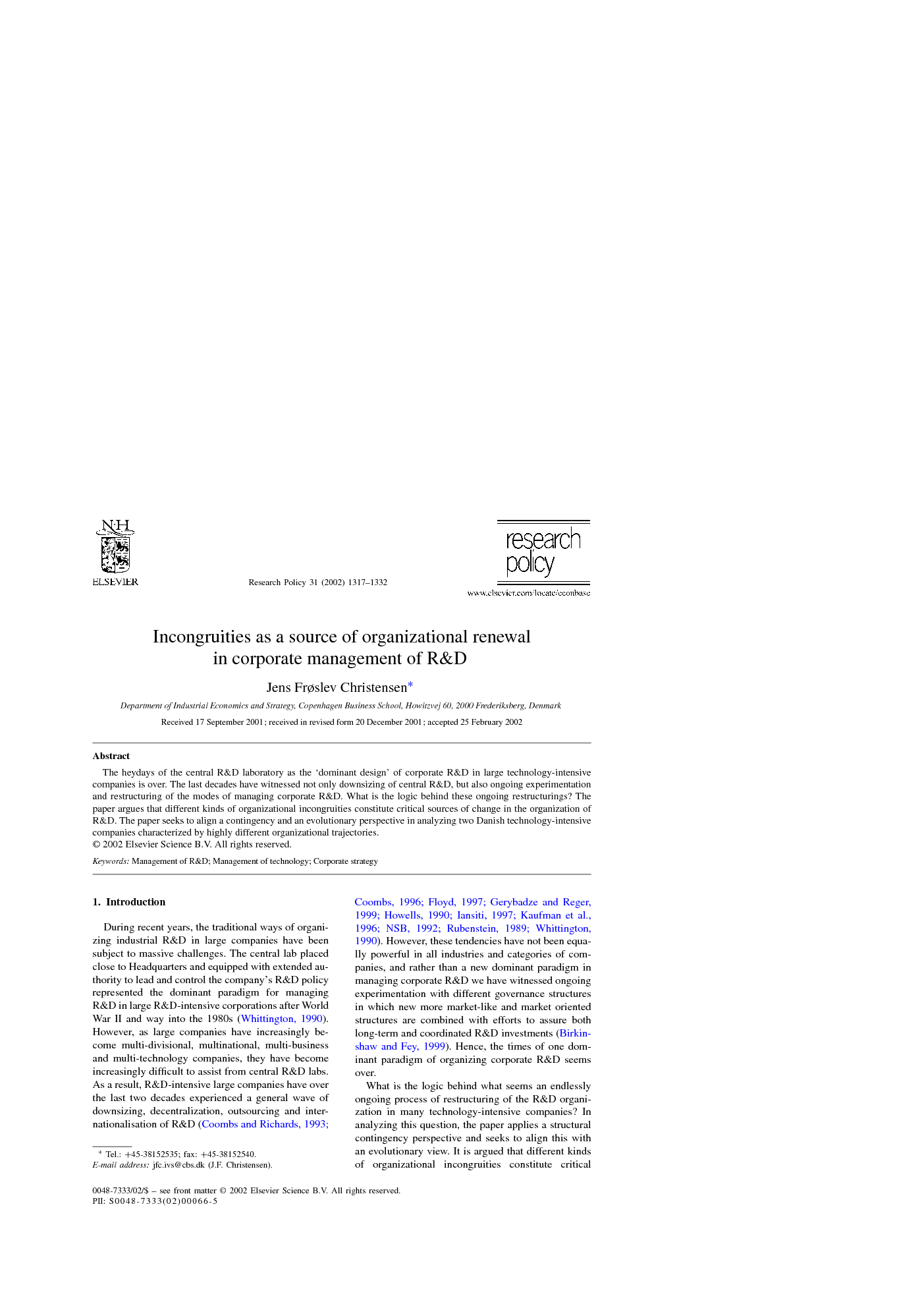 The heydays of the central R&D laboratory as the ‘dominant design’ of corporate R&D in large technology-intensive companies is over. The last decades have witnessed not only downsizing of central R&D, but also ongoing experimentation and restructuring of the modes of managing corporate R&D. What is the logic behind these ongoing restructurings? The paper argues that different kinds of organizational incongruities constitute critical sources of change in the organization of R&D. The paper seeks to align a contingency and an evolutionary perspective in analyzing two Danish technology-intensive companies characterized by highly different organizational trajectories.

During recent years, the traditional ways of organizing industrial R&D in large companies have been subject to massive challenges. The central lab placed close to Headquarters and equipped with extended authority to lead and control the company’s R&D policy represented the dominant paradigm for managing R&D in large R&D-intensive corporations after World War II and way into the 1980s (Whittington, 1990). However, as large companies have increasingly become multi-divisional, multinational, multi-business and multi-technology companies, they have become increasingly difficult to assist from central R&D labs. As a result, R&D-intensive large companies have over the last two decades experienced a general wave of downsizing, decentralization, outsourcing and internationalisation of R&D (Coombs and Richards, 1993, Coombs, 1996, Floyd, 1997, Gerybadze and Reger, 1999, Howells, 1990, Iansiti, 1997, Kaufman et al., 1996, NSB, 1992, Rubenstein, 1989 and Whittington, 1990). However, these tendencies have not been equally powerful in all industries and categories of companies, and rather than a new dominant paradigm in managing corporate R&D we have witnessed ongoing experimentation with different governance structures in which new more market-like and market oriented structures are combined with efforts to assure both long-term and coordinated R&D investments (Birkinshaw and Fey, 1999). Hence, the times of one dominant paradigm of organizing corporate R&D seems over. What is the logic behind what seems an endlessly ongoing process of restructuring of the R&D organization in many technology-intensive companies? In analyzing this question, the paper applies a structural contingency perspective and seeks to align this with an evolutionary view. It is argued that different kinds of organizational incongruities constitute critical sources of change in the organization of R&D. One such organizational incongruity may evolve between the overall changes in the structure and strategy of the company, and the existing mode of managing and organizing R&D. Most large companies are subject to long periods of relative inertia in terms of organizational and strategic development. They develop along what we shall term corporate organizational trajectories. The paper holds that much restructuring of the R&D organization reflects adaptations to such overall trajectories. Another type of organizational incongruity reflects tensions developing within the R&D organization, either between emerging new strategic objectives in R&D investments and the existing mode of managing R&D, or between emerging new R&D structures and the existing R&D strategy. Since it is difficult, if not impossible, to precisely measure efficiency and effectiveness in the management of R&D, changes in organizational practices related to R&D tend to be based on management’s attempts to come up with organizational solutions to remedy inter-subjectively perceived deficiencies or accommodate new strategic objectives. Such perceived incongruities and deficiencies constitute ongoing sources of organizational modification and restructuring. However, while this contingency perspective seems to provide valid explanations of individual restructuring decisions, the evolutionary notion of corporate trajectories may explain the way the pattern of decisions over the longer term may be locked into particular company-specific paths of development or mobilized for new paths. The suggested framework is used to interpret a comparative, longitudinal study of two Danish technology-intensive companies, one representing a decentralizing organizational trajectory (Danfoss), the other a centralizing and integrative trajectory (Grundfos). The question to be faced is, what are the determinants of the major or minor transformations in the management of R&D, and what is the underlying logic behind the pattern of such decisions over a time span of several decades? Section 2 gives a short account of the analytical framework. 3 and 4 present the two-case companies. The historical trajectories of corporate organization and management of R&D are outlined in a descriptive fashion. In Section 5 the case studies are analyzed and discussed according to the analytical framework. Section 6 concludes the paper.

This paper has proposed an analytical framework for understanding what may sometimes seem to be a free floating or fashion-induced experimental dynamics in the organization of R&D in large industrial corporations. The framework tries to link a structural contingency argument with an evolutionary trajectory argument. The contingency argument suggests that different kinds of organizational incongruities constitute critical sources of change in the organization of corporate R&D. One such organizational incongruity may evolve between the overall changes in the structure and strategy of the company and the existing mode of managing and organizing R&D. Another type of incongruity relates to internal tensions between emerging new R&D strategies and the existing mode of managing R&D, or between newly changed R&D structures and the existing R&D strategy. The two case studies show that such a contingency framework can explain individual sequences of decisions of structural changes in the R&D organization. This perspective, however, has a static bias and is not able to explain the dynamic inter-sequential and inter-temporal changes taking place. The evolutionary argument can provide this dynamic perspective. The notion of firm-specific organizational trajectories suggest that firms, as they mature, evolve along paths that are based on imprints from strategies and structures implemented quite early on in the firm’s history. Such trajectories are generally highly difficult to change unless they inherently accumulate organizational incongruities that lead to perceived severe deficiencies (as in the typical change from the U-form to the M-form structure), or they lead to misalignment with industrial and technological dynamics of the external competition (as in the case of IBM’s turnaround from the 1980s and into the 1990s). The two case studies have shown that the overall strategy-structure trajectories of the corporations are important co-determinants of the long-term development of the R&D organization. While Danfoss has undergone the ‘classical’ change from a U-form to an M-form trajectory, Grundfos has not yet experienced a dramatic change in its corporate trajectory. Neither of the two companies has so far experienced changes in the external competitive or technological environment of a nature and scope enforcing or justifying strategic and organizational turnarounds. Moreover, the studies have shown that we may identify a firm-specific R&D trajectory reflecting the dynamics of the evolving constellations of R&D strategy (possibly differentiated into innovation and technology strategy) and mode of managing and organizing R&D (possibly differentiated into management of innovation and management of technology). In accordance with a resource-based and evolutionary view, companies to a large extent pursue their own routes of development based on their own idiosyncratic learning experiences. This is not to deny the fact that every epoch seems to have its own more generic management fashions (e.g. in favor of downsizing, outsourcing, decentralizing, etc.) that are sought diffused through especially the large management consulting firms. Finally, the studies have shown that even if there seems to be an inherent tendency to pursue corporate coherence (Christensen, 1998 and Christensen and Foss, 1997) between the overall organization and the R&D organization, the dynamics of and interplay between the corporate trajectory and the R&D trajectory constantly creates the basis for new incongruities that require managerial response. Thus, the urge for corporate coherence and organizational clarity simultaneously tends to give rise to structurally defined weaknesses that are often later sought remedied by measures, which again increase the organizational complexity. The combined contingency and evolutionary perspective seems to provide a promising analytical framework for dealing with such organizational dynamics in companies showing institutional continuity with respect to corporate identity and ownership.