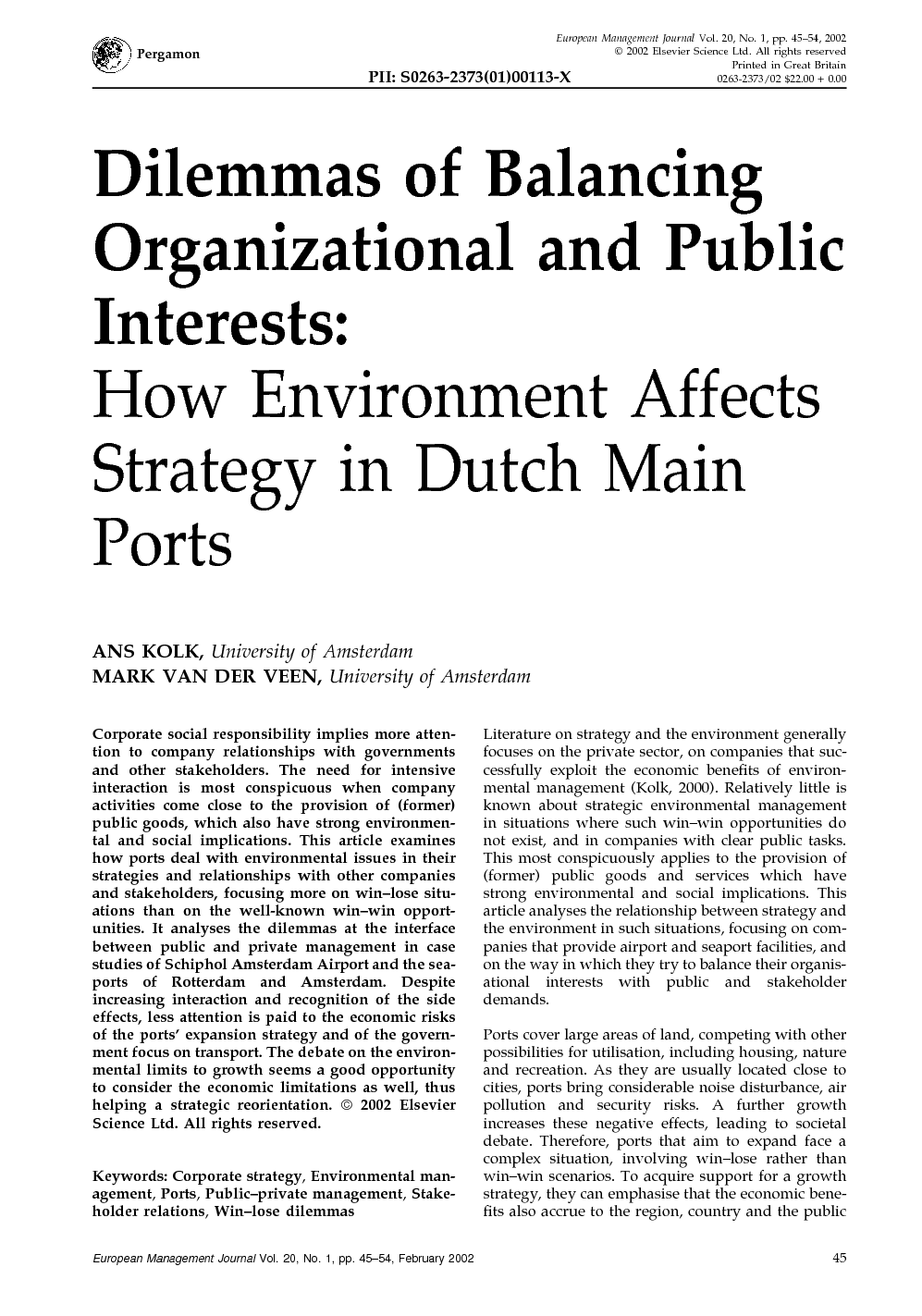 Corporate social responsibility implies more attention to company relationships with governments and other stakeholders. The need for intensive interaction is most conspicuous when company activities come close to the provision of (former) public goods, which also have strong environmental and social implications. This article examines how ports deal with environmental issues in their strategies and relationships with other companies and stakeholders, focusing more on win–lose situations than on the well-known win–win opportunities. It analyses the dilemmas at the interface between public and private management in case studies of Schiphol Amsterdam Airport and the seaports of Rotterdam and Amsterdam. Despite increasing interaction and recognition of the side effects, less attention is paid to the economic risks of the ports' expansion strategy and of the government focus on transport. The debate on the environmental limits to growth seems a good opportunity to consider the economic limitations as well, thus helping a strategic reorientation.

Regardless of the ‘truth’ about the desirability of further expansion of distribution and transport in The Netherlands, the lack of debate on the pros and cons of the mainport strategy considering the ‘triple-bottom line’ is not only unfortunate for public interests, but also for the companies involved. It implies that the risks and limitations of the strong reliance on continued expansion do not receive sufficient attention. This is particularly noteworthy for Schiphol. Since its growth originates from its role as an important ‘hub’ to Europe from the US, this special position of Schiphol (and KLM) will only last as long as the Open Skies Agreement retains its currently limited applicability. Betting on the continuation of Schiphol's current transfer peculiarities is, therefore, very risky, and has been characterised as an overestimation of its strength, especially in view of the US – French 1998 agreement on the phased introduction of ‘open skies’, and ongoing negotiations between the US and other countries, including the UK (Done, 2001). A further extension of the Open Skies agreement to other countries or the EU as a whole would mean that the Dutch airport, with its more peripheral location, small home market and congestion problems, will most likely become a secondary hub at best (Pols, 1997). An explicit consideration of this scenario beforehand can prevent costly investments, in financial, environmental and social terms, in large overcapacity. Moreover, it would help to pro-actively identify potential opportunities (with regard to one or more of the three legs of the triple-bottom line) of such a secondary status, and to examine which of Schiphol's current strengths can be maintained, and how. The situation is somewhat different for the seaports, although here also especially Rotterdam's current reliance on bulk transfer may need adjustments. As such, a change of the emphasis from ‘volume’ to ‘value added’ seems much easier to achieve when compared to Schiphol's position, offering more opportunities for the inclusion of environmental and social considerations. It must be noted, however, that Rotterdam's strategic orientation originates from, and reflects, the characteristics of Dutch industry and agriculture, which is also strongly focused on bulk production (Van Tulder, 1997). This, in turn, is related to the role of (large) companies and their patterns of internationalisation. At the same time, increased use of sea and inland waterways for the transport of goods has clear advantages, because these modes have low emissions per ton/km and may help to solve congestion problems. In its most recent white paper, the European Commission also proposes such a shift away from road transport (CEC, 2001), suggesting measures to facilitate such a transition. The Amsterdam and Rotterdam ports may profit from this European policy in their attempts to find a way out of the controversy between growth and the environment. What hampers such a win–win scenario, however, is that the main benefits of less energy-intensive water transport are global, while the ‘costs’ of land use and the nuisance will continue to be felt locally and regionally. This once again illustrates the dilemmas of balancing organisational and public interests in win–lose situations.