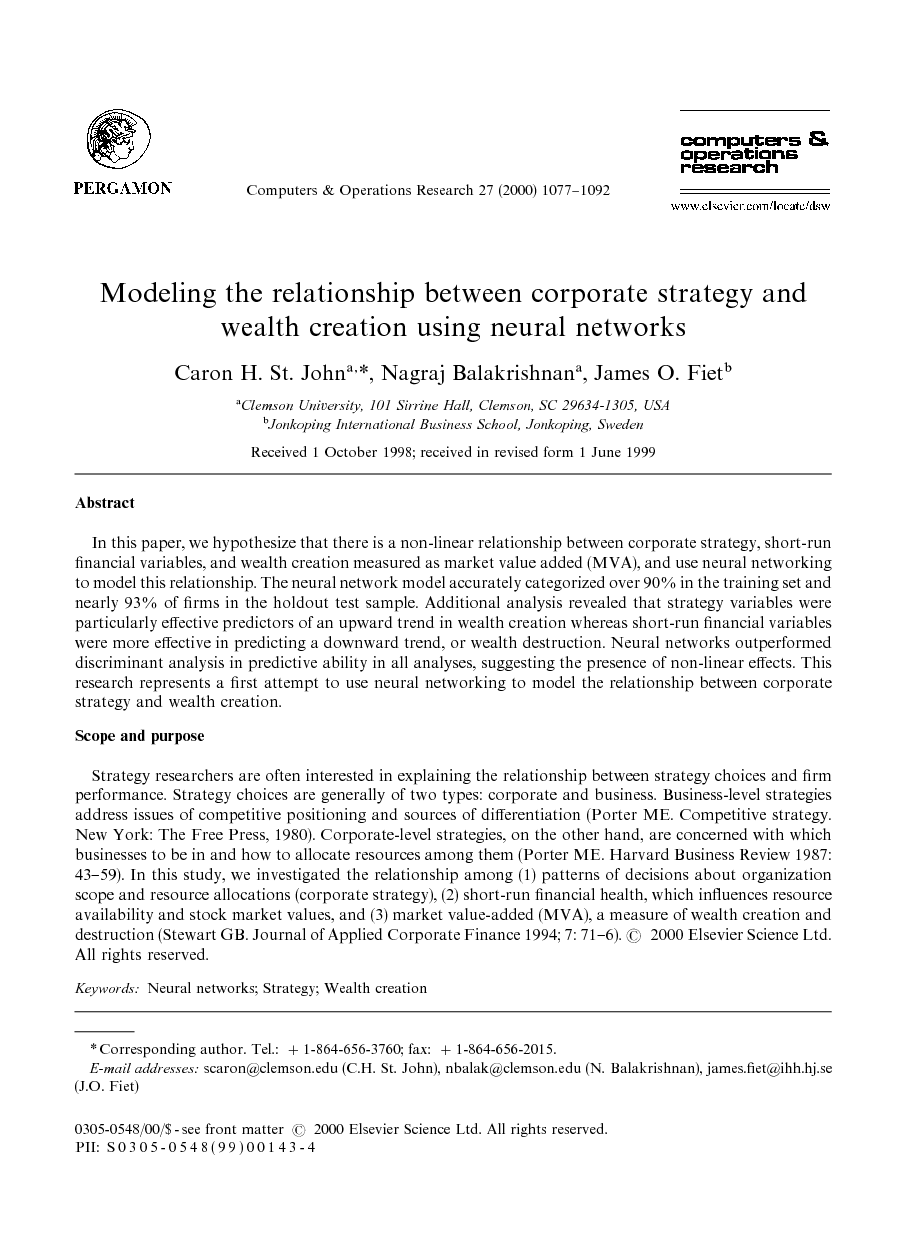 In this paper, we hypothesize that there is a non-linear relationship between corporate strategy, short-run financial variables, and wealth creation measured as market value added (MVA), and use neural networking to model this relationship. The neural network model accurately categorized over 90% in the training set and nearly 93% of firms in the holdout test sample. Additional analysis revealed that strategy variables were particularly effective predictors of an upward trend in wealth creation whereas short-run financial variables were more effective in predicting a downward trend, or wealth destruction. Neural networks outperformed discriminant analysis in predictive ability in all analyses, suggesting the presence of non-linear effects. This research represents a first attempt to use neural networking to model the relationship between corporate strategy and wealth creation.

For researchers in strategic management, some of the most compelling research questions are those that ask: do strategy choices matter to firm performance? Does the pattern of decisions about organization scope and resource allocations over time (corporate strategy) make a difference in firm performance? For several decades, researchers have investigated these questions from many perspectives, with largely ambiguous results. For example, studies of diversification strategies and firm performance have often provided contradictory results [4], [5], [6] and [7] as have studies of retrenchment strategies and performance [8] and [9]. In investigating strategy–performance relationships, researchers frequently hypothesize relationships between very specific strategic decisions, such as diversification or retrenchment, and measures of organizational performance, such as return on assets or shareholder wealth creation. Researchers might look for a relationship between a decision to retrench and shareholder wealth creation measured by cumulative abnormal returns following the announcement, or between related diversification and corporate return on investment. Research designs sometimes fail to recognize that a firm may pursue one strategy that is not valued by the stock market and that depletes earnings, while simultaneously pursuing other strategies that are positively received by the market and are profitable. In other words, owners and investors evaluate the collective pattern of strategies that a firm pursues at any given point in time. From their perspective, it is this overall pattern of strategies that generates wealth for investors. To the degree that we isolate particular strategy choices from their corporate context, we risk over- or under-stating their importance in explaining performance. In modeling these relationships, we need to consider not only the variables but also possible interactions or synergy effects between the variables. It is very difficult to pre-specify a model that would capture such interaction effects, especially if such effects are complex. We, therefore, address this problem in an innovative manner by using neural networks, which have hitherto been relatively unused in strategic management research. We employ neural network analysis to model the pattern of strategy decisions employed by several large corporations over a period of 5 yr. Neural network analysis is an artificial intelligence technique that simulates the human brain's ability to recognize patterns in a series of actions. Neural networks have been used extensively by researchers in biology, physics, and computer science, and are gaining acceptance in the business disciplines. Recently, researchers have employed neural networks in studies of market segmentation [10] and in attempts to use financial statement data to estimate firm financial health [11]. By training the neural network on the strategies and health of a sub-sample of firms, and then applying the network to a new sample of firms, the trained neural network may be used to predict high and low performing firms. The primary research objectives are to: (1) demonstrate the application of neural network analysis to the study of the relationship between corporate strategy decisions, financial health, and organization performance measured as wealth creation, and (2) contrast the capabilities of neural networks and discriminant analysis to predict wealth creation–wealth destruction outcomes.

In this paper, we show compelling evidence that neural network analysis is an useful tool in predicting the wealth effects that result from a collective pattern of corporate strategies and financial health measures. We showed that a change in growth-retrenchment posture, type and extent of diversification efforts, and measures of profit, market share, and liquidity were very accurate predictors of the direction of change in relative market value added over a five year time period, when modeled without an assumption of linearity. Our neural network accurately predicted whether a firm's relative MVA ranking would go up or down in nearly 93% of cases, which is a very high level of prediction accuracy. These findings support the contention of strategy researchers that the pattern of strategy decisions made over time plays an important role in explaining why firms differ in their ability to create wealth [44] and [45]. We also found that strategy variables were highly effective predictors of an upward trend in relative market value added but that financial health variables were more effective predictors of a downward trend. These results suggest that investors and analysts value a consistent pattern of strategy, and associate that consistency with superior returns on invested capital. The results also suggest that investors and analysts are more likely to consider profitability and liquidity trends when determining a decline in performance. This research also found strong support for non-linear effects in the relationship between strategy and wealth creation. In all cases, neural network analysis, an inherently non-linear technique [46], outperformed linear discriminant analysis, using the same predictor variables and firms. Although this is a first attempt to model corporate strategy choices using neural networks, these results suggest that neural networking should be explored in much more depth to determine its power to predict the effects of strategy choices. Linear techniques may be inadequate to explain significant amounts of variation in firm wealth creation. As with other neural network models, these predictive models also have some disadvantages. First, the internal operations of neural networks are not transparent, i.e., it is difficult to identify exact mathematical equations to explain the transformation process. In the present context, while we were able to capture the relationship between the input strategy and financial variables and the wealth creation measure, the neural network did not reveal the exact characteristics of this relationship. In other words, we are unable to make statements about the relative importance of particular strategy choices, and may not make statements about the significance of particular variables. As noted by Tam and Kiang [39], there is no formal method to derive the relative importance of an input variable from the weights of a neural net. Second, because there are no known procedures for specifying the architecture of a neural network for a general problem (in terms of the number of hidden layers, number of nodes in each hidden layer, etc.), identification of the configuration remains, to a large part, a trial and error process. Third, the predictive models, as in other such models, will not work well when an entirely new predictor variable, not present in the current data set, is under consideration for possible inclusion in the model. Even with the limitations, however, the neural network technique seems to hold significant promise as a modeling tool. It can incorporate many variables, model non-linear relationships, disregard data that does not fit the underlying pattern, then use the resulting pattern to predict the dependent variable. The strong prediction accuracy of the present model suggests many opportunities to apply this technique to complex, non-linear strategy problems.