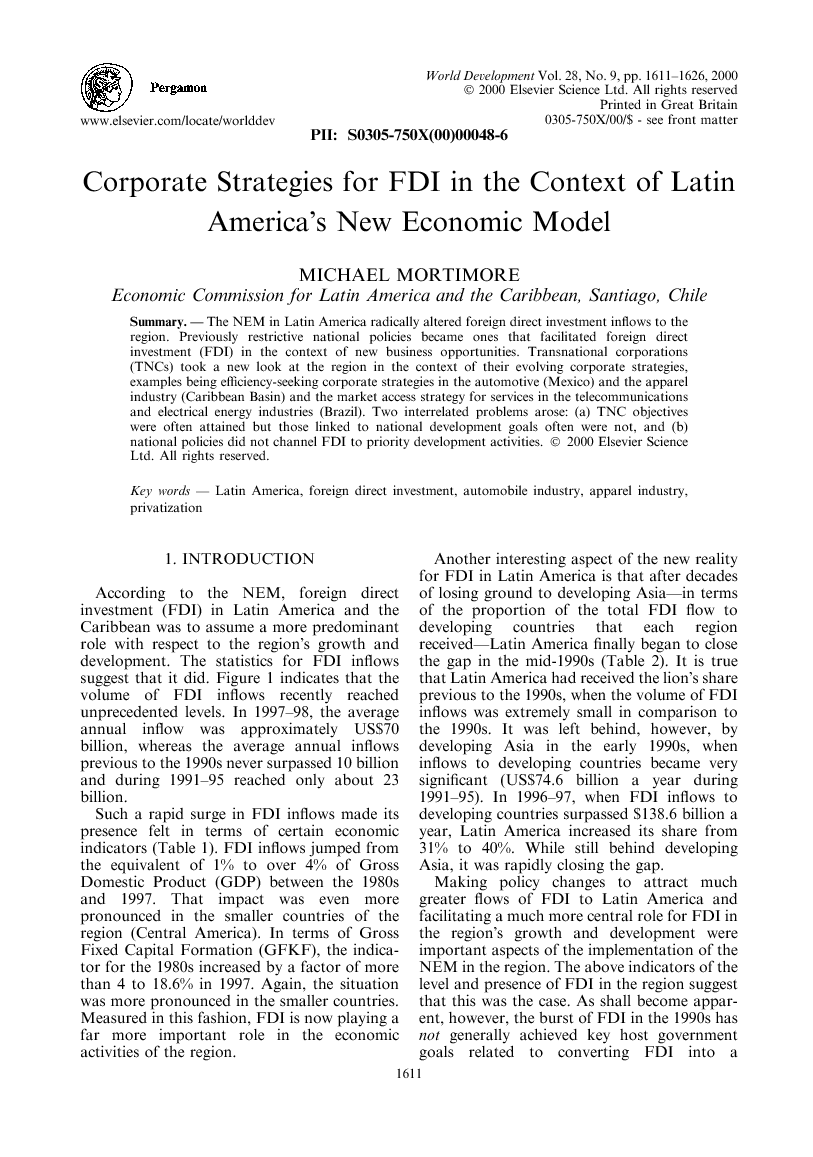 The NEM in Latin America radically altered foreign direct investment inflows to the region. Previously restrictive national policies became ones that facilitated foreign direct investment (FDI) in the context of new business opportunities. Transnational corporations (TNCs) took a new look at the region in the context of their evolving corporate strategies, examples being efficiency-seeking corporate strategies in the automotive (Mexico) and the apparel industry (Caribbean Basin) and the market access strategy for services in the telecommunications and electrical energy industries (Brazil). Two interrelated problems arose: (a) TNC objectives were often attained but those linked to national development goals often were not, and (b) national policies did not channel FDI to priority development activities.

According to the NEM, foreign direct investment (FDI) in Latin America and the Caribbean was to assume a more predominant role with respect to the region’s growth and development. The statistics for FDI inflows suggest that it did. Figure 1indicates that the volume of FDI inflows recently reached unprecedented levels. In 1997–98, the average annual inflow was approximately US$70 billion, whereas the average annual inflows previous to the 1990s never surpassed 10 billion and during 1991–95 reached only about 23 billion.

The New Economic Model in Latin America has undoubtedly been a significant factor in changing transnational corporate strategies with respect to Latin America and the Caribbean. The dimension of those changes is manifest in the explosion of FDI directed at the region, rising from $14.2 billion a year during 1990–92 to about $70 billion a year during 1997–98. It was possible to make sense of the sheer mass of these FDI operations by organizing them according to the goals of the corresponding corporate objectives (efficiency-seeking, market access for services or manufactures, and seeking secure supplies of primary materials). It was then possible to analyze the most important examples according to the intersection of three sets of factors (the competitive situation in the international market, changes in national policy, and the nature of corporate strategies). For US TNCs seeking to gain efficiency in their automobile or apparel assembly operations in Mexico and the Caribbean Basin, the explanation came in the intersection of different groups of factors, such as the Asian challenge in the US market, the new national and US policies to accommodate the new corporate strategies, and the specific competitive situations of individual corporate systems of integrated production. With regard to TNCs seeking access to the Brazilian market for services, the relevant factors had to do with the strategic positioning of firms made possible by the liberalization and deregulation of telecommunications and electricity generation and distribution, and the particular situations of corporations such as Telefónica de España and MCI, in telecommunications, and AES Corp. and Endesa/Enersis, in electricity. This analysis permits some interesting insights into the new corporate strategies for FDI in the context of the new economic model in Latin America and the Caribbean. Latin America is attracting mainly the reactive FDI of second and third-rate TNCs seeking to improve the efficiency of their regional systems of integrated production, not the FDI of the first-rank international market conquerors. Moreover, the way that US TNCs successfully organize their production to meet the different Asian challenges in their home market implies certain costs, as well as benefits, for the host countries of their FDI in the region. In the case of Mexico, the norms of origin of NAFTA are producing many positive results in both automobiles ( Mortimore, 1998a and Mortimore, 1998b) and apparel (Gereffi & Bair, 1998) because Mexican physical inputs now count as “NAFTA content” in the North American market. On the other hand, the organization of offshore assembly of apparel in the Caribbean Basin is a clear example of some of the costs involved, measured in terms of the national industrialization process (Mortimore, 1999). Local physical inputs do not count as “NAFTA content,” although parity has been sought for years in the US Congress, and they are taxed as value added outside of the US market upon entry. This naturally truncates the national industrialization process and produces a severe competitive challenge for national firms. The analysis of the massive new FDI in services in Brazil also offers certain insights. A large proportion of the new inflows corresponds to the purchase of existing assets rather than the creation of new ones. This is not necessarily a problem, since the new owners usually invest significant resources into modernizing the facilities in order to make them more competitive, and this has a favorable impact on the systemic competitiveness of the host economy. But when the investment is highly concentrated in a small number of huge operations, when some of the principal new investors are adventurous newcomers (Telefónica de España, Telecom Portugal, Endesa/Enersis, etc.) that are possibly out of their depth, when the regulatory environment is weak and the state seems to depend financially on the sale of its limited assets, then caution is warranted. For example, whereas Telefónica’s investment strategy in Latin America was said to rest essentially on good telecommunications regulations combined with a strong macroeconomic stability in the host country, it jumped in with both feet in Brazil, a country that clearly did not seem to fulfill either requirement. Furthermore, from the FDI recipient perspective, how long can privatization programs sustain FDI inflows before the state runs out of attractive assets to sell? All in all, several of the governments of Latin America and the Caribbean should be congratulated for reestablishing the region as a destination for significant inflows of FDI,—a vast improvement over the situation during the lost decade of the 1980s. At the same time, it must be pointed out that there seems to be no direct or clear connection between the increased inflows of FDI and the growth of economic activities in those economies. In the rush to attract FDI, most governments of the region do not seem to have very clear long-term objectives, except a vague idea that somehow investment, especially foreign investment, produces growth, exports, employment, etc. Yet we have seen that there is often a down side for the host economies. For example, there was quite a difference between expectations and reality in the apparel industry in the Caribbean Basin. In the services sector of Brazil, most of the FDI inflows went to the purchase of existing assets undergoing privatization. Doubts could be raised about the concentration in those industries and the supervision of the modernization of those existing assets. Perhaps it is the moment to turn national policy from simply attracting FDI to defining the results expected for the national economy, so that national developmental objectives, as well as corporate ones, can be attained.