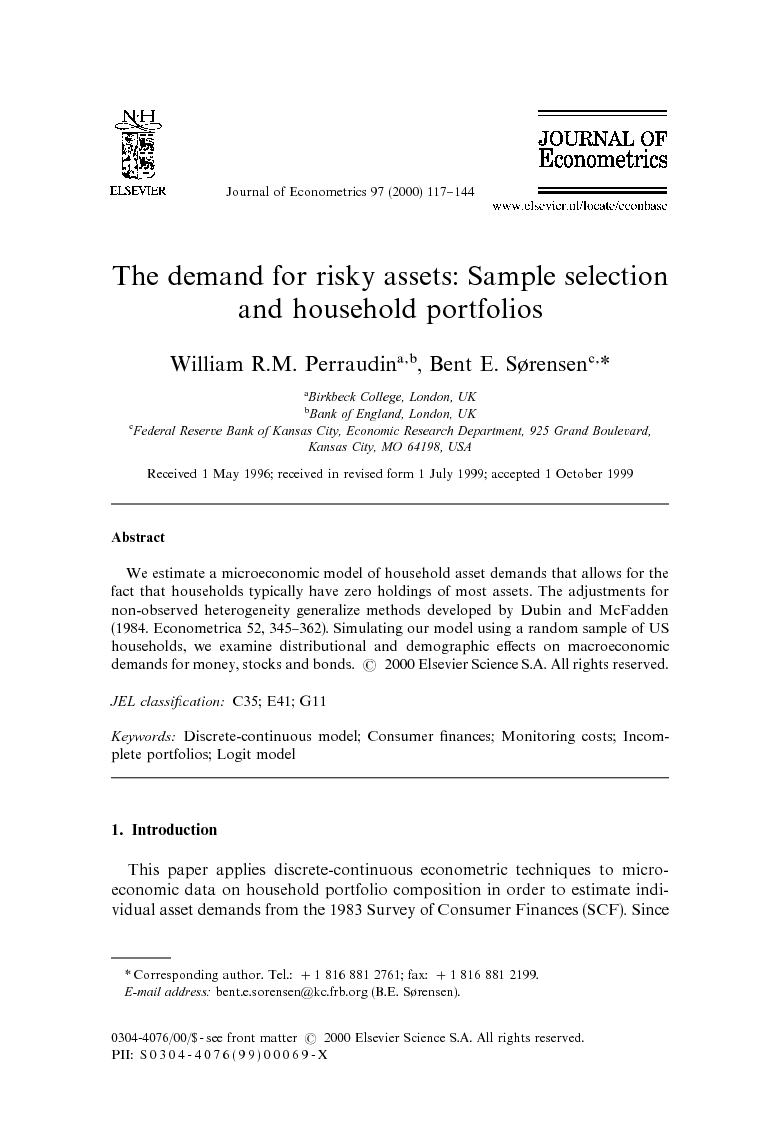 We estimate a microeconomic model of household asset demands that allows for the fact that households typically have zero holdings of most assets. The adjustments for non-observed heterogeneity generalize methods developed by Dubin and McFadden (1984. Econometrica 52, 345–362). Simulating our model using a random sample of US households, we examine distributional and demographic effects on macroeconomic demands for money, stocks and bonds.

This paper has employed discrete-continuous econometric methods, allowing for sample selectivity, to model US households' portfolio decisions. Our major conclusions are: 1. Asset Engel curves are non-linear, generating signi"cant increases in demands for stocks and bonds as wealth rises. In a simulation designed to replicate the impact on the portfolio choices of the US population, we "nd that a 10% proportional rise in wealth of all households leads to a 24% and a 25% increase in stock and bond demand, respectively. A 10% rise in the absolute dispersion of log wealth leads to a 11% rise in stock demand but only a 2% rise in the demand for bonds. 2. Household characteristics apart from wealth have important e!ects on portfolio decisions. For individual households, family size, sex of household head, education and attitudes to risk and liquidity signi"cantly in#uence the basket of assets households end up possessing. Race, marital status, and occupation are less important. 3. Simulations of the impact of changes in household characteristics on the asset demands of the population as a whole suggest that shifts from married to single household heads, changes in educational level, occupation, liquidity and risk preference can lead to big percentage changes in bond demands, often with o!setting changes in both stock and money demands. 4. Selectivity adjustments are highly statistically signi"cant. This suggests that the results of past studies which employed discrete-continuous methods but did not allow for selectivity may be hard to interpret.