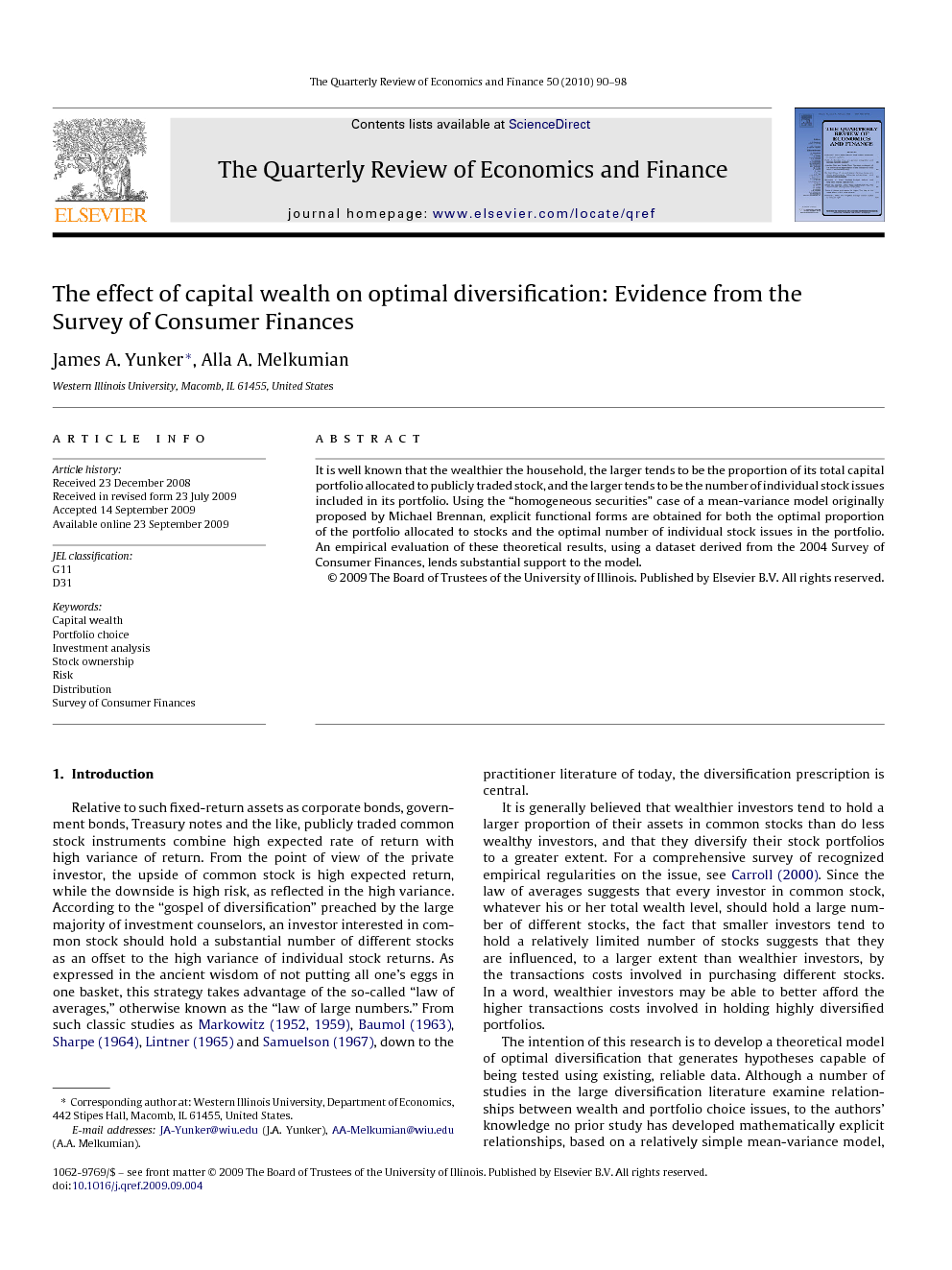 It is well known that the wealthier the household, the larger tends to be the proportion of its total capital portfolio allocated to publicly traded stock, and the larger tends to be the number of individual stock issues included in its portfolio. Using the “homogeneous securities” case of a mean-variance model originally proposed by Michael Brennan, explicit functional forms are obtained for both the optimal proportion of the portfolio allocated to stocks and the optimal number of individual stock issues in the portfolio. An empirical evaluation of these theoretical results, using a dataset derived from the 2004 Survey of Consumer Finances, lends substantial support to the model.

Relative to such fixed-return assets as corporate bonds, government bonds, Treasury notes and the like, publicly traded common stock instruments combine high expected rate of return with high variance of return. From the point of view of the private investor, the upside of common stock is high expected return, while the downside is high risk, as reflected in the high variance. According to the “gospel of diversification” preached by the large majority of investment counselors, an investor interested in common stock should hold a substantial number of different stocks as an offset to the high variance of individual stock returns. As expressed in the ancient wisdom of not putting all one's eggs in one basket, this strategy takes advantage of the so-called “law of averages,” otherwise known as the “law of large numbers.” From such classic studies as Markowitz, 1952 and Markowitz, 1959, Baumol (1963), Sharpe (1964), Lintner (1965) and Samuelson (1967), down to the practitioner literature of today, the diversification prescription is central. It is generally believed that wealthier investors tend to hold a larger proportion of their assets in common stocks than do less wealthy investors, and that they diversify their stock portfolios to a greater extent. For a comprehensive survey of recognized empirical regularities on the issue, see Carroll (2000). Since the law of averages suggests that every investor in common stock, whatever his or her total wealth level, should hold a large number of different stocks, the fact that smaller investors tend to hold a relatively limited number of stocks suggests that they are influenced, to a larger extent than wealthier investors, by the transactions costs involved in purchasing different stocks. In a word, wealthier investors may be able to better afford the higher transactions costs involved in holding highly diversified portfolios. The intention of this research is to develop a theoretical model of optimal diversification that generates hypotheses capable of being tested using existing, reliable data. Although a number of studies in the large diversification literature examine relationships between wealth and portfolio choice issues, to the authors’ knowledge no prior study has developed mathematically explicit relationships, based on a relatively simple mean-variance model, between total capital wealth and both the proportion of total capital wealth devoted to stock and the number of individual stocks held by the investor, that are capable of being empirically tested using well-known survey data. We utilize the “homogeneous securities” case of a mean-variance model originally proposed by Brennan (1975). Although Brennan did not himself develop explicit mathematical forms for the optimal proportion of the total portfolio to be invested in stocks, and the optimal number of stock issues to hold in the portfolio, it is straightforward to derive these formulae from the first-order maximization conditions of the model. These explicit theoretical predictions are tested using data from the 2004 Survey of Consumer Finances. The empirical analysis does in fact lend considerable support to the predictions. The remainder of this article is organized as follows. Section 2 contains a brief survey of related literature. Section 3 sets forth the model. Section 4 describes the 2004 Survey of Consumer Finances and enumerates the variables utilized in this research. Section 5 presents the empirical results. Section 6 briefly reviews some of the more important caveats and qualifications. Section 7 concludes.

It is common knowledge that wealthier households hold a larger percentage of their total capital assets in the form of publicly traded stock, and that their stock capital portfolios are more diversified, than is the case with less wealthy households. The objective of this research has been to provide a relatively simple theoretical explanation for these facts that is conveniently testable with readily available, reliable survey data. On the basis of some strong assumptions, especially “homogeneous securities,” our mean-variance model, based on Brennan (1975), produces mathematically explicit solutions for the optimal values of stock proportion  and number of stocks n. Direct inspection of these solutions indicates that the optimal stock proportion is a linear function of the reciprocal of the square root of total capital wealth, while the optimal number of stock issues is a linear function of the square root of total capital wealth. Data from the 2004 Survey of Consumer Finances (SCF) has been utilized in this research to evaluate these results. The statistical analysis is supportive: the t-statistic of the 1/ √ a independent variable in the  equation (proportion of total portfolio allocated to stock) is strongly significant, both for the full SCF dataset and for the aggregated SCF datasets. While the R-squared goodness-of-fit statistic for the full SCF dataset is quite low, this statistic becomes respectably large for the aggregated SCF datasets. Results for the √ a variable in the n equation (number of stocks in the portfolio) are similar, except that even for the full SCF dataset, the R-squared goodness-of-fit statistic is fairly respectable given that the data is cross-sectional. It goes without saying that some strong assumptions are necessary to obtain the mathematically explicit solutions and unambiguous comparative statics results forthcoming from the homogeneous securities model of optimal diversification. But it has been the universal experience of economic theoreticians that without strong assumptions, rather little of practical interest can be deduced. And strong assumptions are not necessarily invalid assumptions. Moreover, the fact that reasonably good fits to notoriously variable survey data are obtained using regression specifications indicated by the model, constitutes worthwhile evidence that the model, despite its relative simplicity, may in fact be a reasonable approximation to reality.