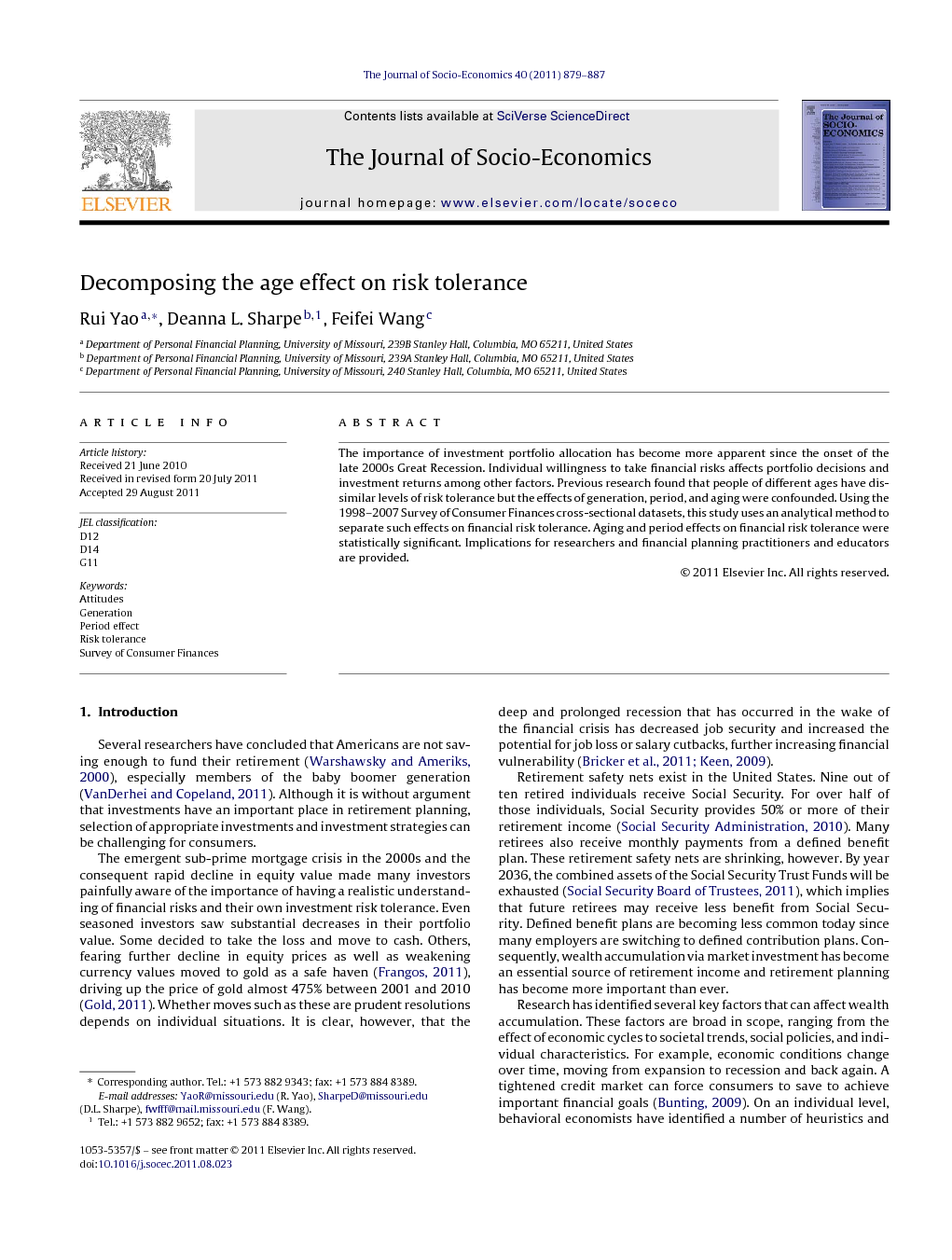 The importance of investment portfolio allocation has become more apparent since the onset of the late 2000s Great Recession. Individual willingness to take financial risks affects portfolio decisions and investment returns among other factors. Previous research found that people of different ages have dissimilar levels of risk tolerance but the effects of generation, period, and aging were confounded. Using the 1998–2007 Survey of Consumer Finances cross-sectional datasets, this study uses an analytical method to separate such effects on financial risk tolerance. Aging and period effects on financial risk tolerance were statistically significant. Implications for researchers and financial planning practitioners and educators are provided.

Several researchers have concluded that Americans are not saving enough to fund their retirement (Warshawsky and Ameriks, 2000), especially members of the baby boomer generation (VanDerhei and Copeland, 2011). Although it is without argument that investments have an important place in retirement planning, selection of appropriate investments and investment strategies can be challenging for consumers. The emergent sub-prime mortgage crisis in the 2000s and the consequent rapid decline in equity value made many investors painfully aware of the importance of having a realistic understanding of financial risks and their own investment risk tolerance. Even seasoned investors saw substantial decreases in their portfolio value. Some decided to take the loss and move to cash. Others, fearing further decline in equity prices as well as weakening currency values moved to gold as a safe haven (Frangos, 2011), driving up the price of gold almost 475% between 2001 and 2010 (Gold, 2011). Whether moves such as these are prudent resolutions depends on individual situations. It is clear, however, that the deep and prolonged recession that has occurred in the wake of the financial crisis has decreased job security and increased the potential for job loss or salary cutbacks, further increasing financial vulnerability (Bricker et al., 2011 and Keen, 2009). Retirement safety nets exist in the United States. Nine out of ten retired individuals receive Social Security. For over half of those individuals, Social Security provides 50% or more of their retirement income (Social Security Administration, 2010). Many retirees also receive monthly payments from a defined benefit plan. These retirement safety nets are shrinking, however. By year 2036, the combined assets of the Social Security Trust Funds will be exhausted (Social Security Board of Trustees, 2011), which implies that future retirees may receive less benefit from Social Security. Defined benefit plans are becoming less common today since many employers are switching to defined contribution plans. Consequently, wealth accumulation via market investment has become an essential source of retirement income and retirement planning has become more important than ever. Research has identified several key factors that can affect wealth accumulation. These factors are broad in scope, ranging from the effect of economic cycles to societal trends, social policies, and individual characteristics. For example, economic conditions change over time, moving from expansion to recession and back again. A tightened credit market can force consumers to save to achieve important financial goals (Bunting, 2009). On an individual level, behavioral economists have identified a number of heuristics and cognitive biases that can adversely influence investment choice and behavior (Tversky and Kahneman, 1974 and Pompian, 2006). Desire to spend on conspicuous consumption can slow wealth accumulation (Yamada, 2008). Generational effects also exist. Each generation experiences a unique demographic, political, and socioeconomic environment during their formative years. Differing experiences shared by a generation may contribute to dissimilar attitudes toward financial risks between those in different generations. For instance, many of those who experienced the Great Depression tended to remain risk averse for the remainder of their lives (Malmendier and Nagel, 2009). In contrast, due to sustained government intervention in U.S. financial markets, many members of Generation X had never experienced a down market until the recent Great Recession (Keen, 2009). Variations in risk preferences may also lead to differences in portfolio allocations that eventually result in wealth inequality. Accurate assessment of risk tolerance is another important element in helping to prevent over participation in the market that may result in unnecessary losses, or inadequate market participation that may lead to high opportunity costs, or other financial mistakes such as cashing out when market returns decline and investing when market returns are high. According to the theory of reasoned action (Fishbein and Ajzen, 1975), attitudes affect behavior. Investment returns are directly influenced by an individual's portfolio allocation (behavior), which, in turn, should be affected by their willingness to take financial risks (attitudes). Therefore, whether investors are willing to take financial risks; who are more likely to take these risks; how much risk are they willing to take; and what factors affect individuals’ willingness to take financial risks become important issues for researchers to investigate. Researchers have long been aware of the differences in financial risk tolerance of individuals of various ages. These differences have typically been labeled as “the age effect”. But this “age effect” is really a combination of three effects: aging, generation, and period. The collective analyses of age, cohort/generation, and period have been employed in marketing research (e.g. Chen et al., 2001 and Rentz and Reynolds, 1991). The studies that focused on financial risk tolerance have failed to separate these effects, however (e.g. Chaulk et al., 2003 and Grable, 2000). What was attributed to an “age effect” may be due to: (1) the decrease of investment horizons and depreciation of human capital as people age (the aging effect); (2) socioeconomic environments that influence different generations and do not change with age (the generation effect); or (3) socioeconomic environments that influence individuals of all ages over time (the period effect). The purpose of this study is to examine the true age effect by decomposing it into these three effects. The following is a review of literature on “the age effect” on risk tolerance and a discussion of the limitations of this prior work.