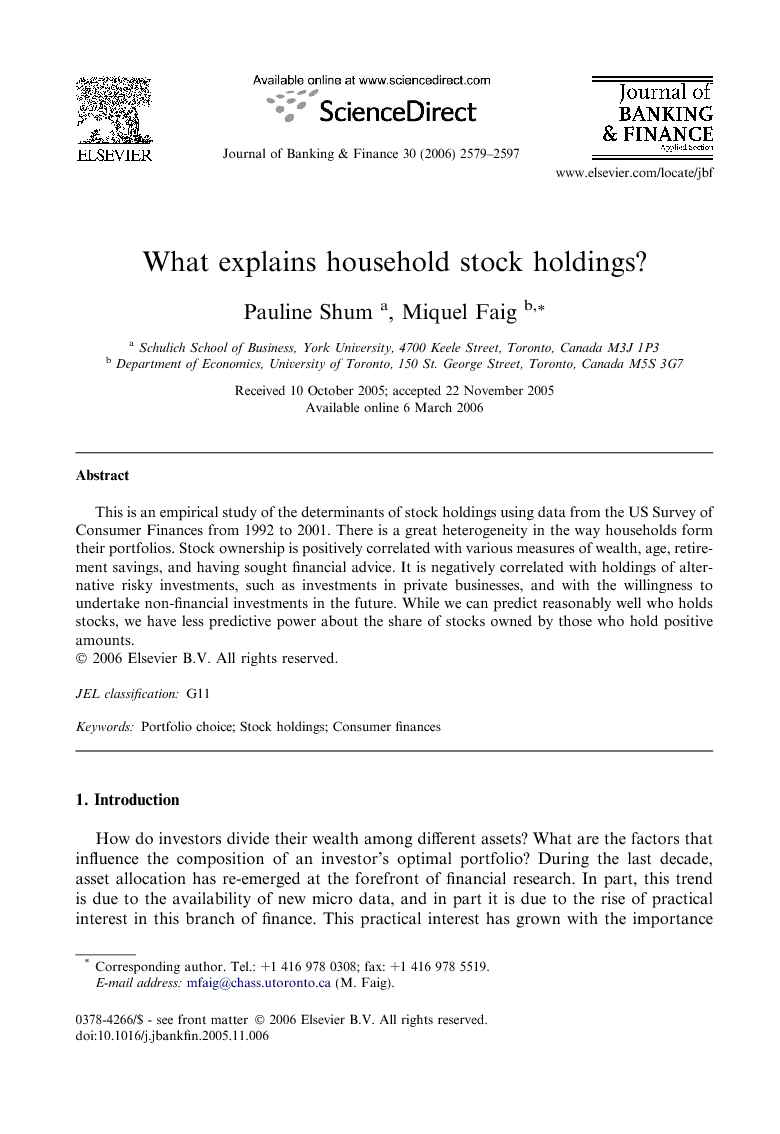 This is an empirical study of the determinants of stock holdings using data from the US Survey of Consumer Finances from 1992 to 2001. There is a great heterogeneity in the way households form their portfolios. Stock ownership is positively correlated with various measures of wealth, age, retirement savings, and having sought financial advice. It is negatively correlated with holdings of alternative risky investments, such as investments in private businesses, and with the willingness to undertake non-financial investments in the future. While we can predict reasonably well who holds stocks, we have less predictive power about the share of stocks owned by those who hold positive amounts.

How do investors divide their wealth among different assets? What are the factors that influence the composition of an investor’s optimal portfolio? During the last decade, asset allocation has re-emerged at the forefront of financial research. In part, this trend is due to the availability of new micro data, and in part it is due to the rise of practical interest in this branch of finance. This practical interest has grown with the importance of financial assets as a share of total assets. This share has climbed from 31.6% in 1992 to 42% in 2001 (see Aizcorbe et al., 2003). Furthermore, the interest of portfolio theory has also grown with the concerns over the management of retirement wealth. With the rise in popularity of directed retirement accounts, individuals are finding it necessary to educate themselves in this area.1 This necessity will become ever more pressing if President Bush’s proposed private Social Security program becomes a reality. In this paper, we contribute to the theory of portfolio choice by examining the empirical determinants of stock holdings. In our study, we use the broad US Survey of Consumer Finances (SCF) from 1992 to 2001, and explore some information little explored in earlier contributions. The SCF provides a rich source of information on the financial characteristics of US households. Detailed information is collected on household assets and liabilities, as well as accompanying household characteristics such as demographics, labour force activities, income, etc. The survey is conducted every three years. In our analysis, we employ the four most recent editions of the survey that are currently available: 1992, 1995, 1998, and 2001. Our analysis of this rich set of data complements the existing literature in the following ways. First, the recently released survey of 2001 provides an interesting look at stock holdings after the bull market years of the late 1990s. Second, we have information on the overall portfolios held by households that are representative of the US population, as opposed to relatively narrow subsets as in several recent studies. (Agnew et al., 2003, focus on 401(k) accounts of one company, Odean, 1999 and Barber and Odean, 2001, focus on discount brokerage accounts of one financial institution.) Third, our data set allows us to include a more comprehensive set of explanatory variables than in previous studies. For example, Ameriks and Zeldes (2001) focus primarily on the distinction among the age, time and cohort effects. Barber and Odean (2001) focus on gender and marital status. Agnew et al. (2003) focus on age, gender, marital status, salary and job tenure. Because the SCF contains information on many household characteristics, we add variables such as non-financial investments (e.g., real estate, private business), motives for saving, and the use of professional investment advice. The main insights we learn from our analysis are as follows: Households have continued to increase their stock holdings in 2001 relative to earlier surveys. Despite the end of the bullish stock market of the 1990s, households in 2001 were not only more likely to hold stocks than in earlier surveys, but also those who held stocks increased on average the equity share in their financial portfolios. Both the increase in the participation rate and the increase in the average equity share are robust to the control for other household characteristics. The distribution of households by the fraction of stocks held in their overall portfolios is much less bimodal than the distributions reported by Ameriks and Zeldes, 2001 and Agnew et al., 2003 in 401(k) accounts. Therefore, the two extreme modes at zero and at 100% stocks documented in these earlier studies do not reflect extreme overall portfolio formation. Instead, they may reflect an attempt to minimize transaction costs and tax liabilities, or reflect the set of investment choices available in 401(k) plans, which can have a strong equity bias. Saving motives are important for predicting if a household holds stocks or not. Saving for education bills, household purchases, and retirement increases the likelihood of stock ownership. Meanwhile, saving to invest in a private business enterprise reduces the likelihood of stock ownership. One of the new variables we study is professional investment advice. Households who sought professional investment advice are more likely to hold stocks. This is consistent with the view that an important barrier to holding stocks is the lack of financial sophistication to do so successfully. However, many households who sought professional advice did not actually end up investing in stocks. Likewise, the distribution of households by their share of equity in the financial portfolio is little affected by having sought professional advice or not. Therefore, we conclude that the barriers to enter the stock market are not easily mitigated by professional advice, and that other important factors are at play.2 We observe a hump-shaped age effect in both stock ownership and equity shares in portfolios. The likelihood of stock ownership, conditional on a host of other explanatory variables, increases with age until age 61, while conditional equity shares peak at around age 50. The rest of the paper is organized as follows. In Section 2, we document the distribution of households by the fraction of stocks in their financial portfolios. In Section 3, we describe the explanatory variables, the sample selection process, and the method of estimation. In Section 4, we present a probit analysis of who owns stocks. In Section 5, we analyze the determinants of the fraction of stocks held in the portfolio conditional on stock ownership. In Section 5, we study a Tobit model where the decision to hold stocks and the fractions held are decided simultaneously. A summary section concludes the paper.

When we combine the analyses in the preceding sections, we reach the following conclusions. There is great heterogeneity in the way households form their financial portfolios. With available data we are able to explain only a small fraction of this diversity. We find that the decision to hold stocks is positively correlated with various measures of wealth, such as financial net worth and labour income, with age, with risk attitude, with having sought financial advice, and with some saving motives such as saving for retirement. Moreover, stock ownership is negatively correlated with holdings of alternative risky investments, such as private business, and with the willingness to undertake non-financial investments in the future, such as invest in own home and own business. Although we predict better who owns stocks than the portfolio shares for those that hold positive amounts, we find the following explanatory variables affect portfolio shares: age has a hump-shape effect with a peak around 50; financial net worth, time dummies, and saving for retirement have a positive effect; risk attitude and value of real investments (business or home) have a negative effect. Another noteworthy observation is that broadly defined stocks – the dependent variable used in our study – respond more to the explanatory variables than narrowly defined stocks (directly held stocks, stocks held in mutual funds or thrift-type retirement accounts). This suggests that non-traditional forms of equity investment (stocks held in annuities, IRA/Keoghs, trusts and other managed investment accounts) are becoming more important in household portfolios. A partial explanation for our findings is that, despite the advancement of internet technology in the last decade, there is still a significant barrier to equity investment for the average US household, due to information and transaction costs. Unfortunately, this explanation is at best incomplete because it does not account for the wide diversity in the way households form their financial portfolios. This diversity may be due to a lack of understanding by investors of the true consequences of alternative investment strategies. That is, even if an individual has enough knowledge and confidence to buy stocks, he may not know how risky stocks are, or may not comprehend the advantages of diversification, or the need to rebalance his portfolio. If portfolio diversity is due to this reason, there is little we can do at this stage to better understand portfolio formation, except to emphasize the importance of financial education (although in the SCF data, we find that having sought professional investment advice does not improve the predictability of equity shares). We believe that there are other important reasons – still not well understood – for portfolio diversity. For example, the precise environment in which consumption, saving, and investment decisions take place must matter a great deal on risk taking behavior. In our earlier paper (Faig and Shum, 2002), we show that the lumpiness and illiquidity of private investment projects change in surprising ways the risk taking behavior in the portfolio of financial assets. More generally, liquidity considerations and the lumpiness of many expenditures should affect the incentives for accepting risks in the financial portfolio in ways that we should strive to understand better. Finally, several studies have reported that investors make extreme choices in their retirement and mutual fund accounts, and that this behavior may be tied to psychological factors. However, when we consider the equity share in their overall portfolios, such behavior is not evident. Hence, it is possible that the observed ‘‘zero or one’’ choice in these ‘‘subset’’ accounts are simply strategies to minimize total tax liabilities or transaction costs.