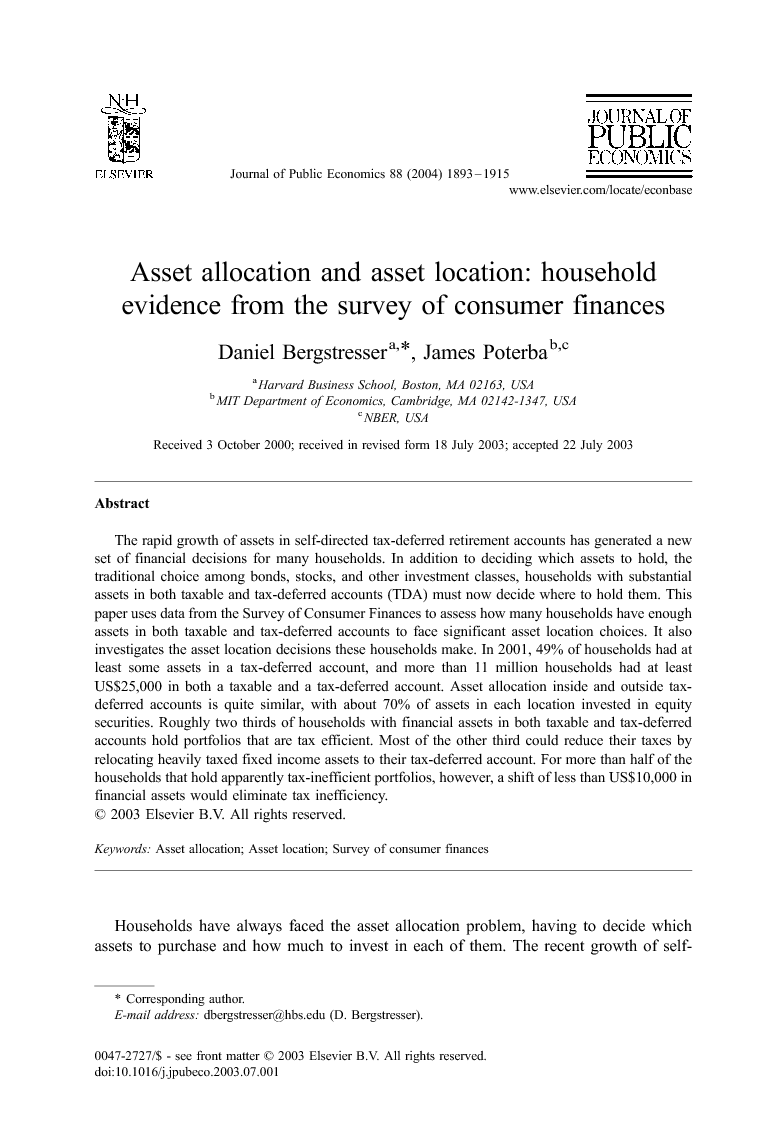 Households have always faced the asset allocation problem, having to decide which assets to purchase and how much to invest in each of them. The recent growth of self-directed retirement plan assets has created a new problem for many households: asset location. This is the question of how much of a given asset to hold in a taxable account, and how much of it to hold in a tax-deferred account (TDA). In the United States, assets in participant-directed tax-deferred accounts totaled nearly 5 trillion dollars at the end of 2001, with US$2.4 trillion in Individual Retirement Accounts (IRA) and US$2.3 trillion in 401(k)-type retirement plans. At the end of 1990, by comparison, IRAs totaled US$637 billion, and there were US$735 billion in all defined contribution plans. Asset location has attracted attention from researchers in public finance and financial economics, and is a frequent topic of discussion among financial planners, such as Novack (2003). Shoven (1999) outlined the structure of the asset location problem, and observed that tax minimization would usually dictate holding heavily taxed taxable bonds in the tax-deferred account, with less heavily taxed equities in the taxable account. Recent works by Amromin (2002), Dammon et al. (forthcoming), Huang (2001), Poterba et al. (2004), and Shoven and Sialm (2004) offer further insight on the optimal asset mix for households facing various tax and financial circumstances. The earliest studies of asset location derived very strong rules about optimal asset location in stylized environments. More recent work has emphasized that various institutional realities, such as limitations on the set of investment options available to the household or the structure of lending markets for large expenditure needs, may significantly affect optimal asset location decisions and may lead to deviations from predictions in a stylized setting. Taxes are only one of the factors affecting asset location decisions in such environments. Transaction costs or liquidity needs may make it optimal to hold some heavily taxed assets outside the tax-deferred account. Most of the recent research on asset location has focused on the derivation of tax-minimizing portfolio strategies, rather than on the analysis of household portfolio choices. Several studies, however, have presented empirical evidence on asset location. Two studies have been based on surveys of TIAA-CREF participants. One by Bodie and Crane (1997) finds that investors choose similar asset allocations in their taxable and tax-deferred accounts. A related study by Ameriks and Zeldes (2001) investigates age and cohort effects in portfolio choices of TIAA-CREF participants, and shows that most participants make very few, if any, allocation changes with respect to their contribution flows. The extent to which the behavior of TIAA-CREF participants can be generalized to the population at large is an open issue. A third study (Barber and Odean, 2004) is based on data drawn from client records at a discount brokerage firm. It shows that households hold equity mutual funds and taxable bonds in their tax-deferred accounts, while they hold individual equities in their taxable account. Because individual equity holdings tend to be less heavily taxed than bonds or equity mutual funds, this asset location pattern is broadly consistent with tax-minimizing behavior. However, households are also more likely to trade stocks in their taxable than in their tax-deferred account, even though trading in the tax-deferred account does not generate capital gains tax liability. A key concern with this study is whether data on assets held through a single brokerage firm adequately capture a household's broader balance sheet. A fourth study (Amromin, 2002) uses data from the Survey of Consumer Finances to summarize tax-deferred account holdings and to investigate whether precautionary demands for financial assets, coupled with penalties and restrictions on withdrawing assets from tax-deferred accounts, can explain deviations from tax-efficient asset location patterns. The findings suggest that the standard deviation of household labor income is related to asset location choices, with households in less risky occupations choosing more tax-efficient asset locations. This paper represents an important step toward modeling the factors that affect asset location choices. Finally, Poterba and Samwick (2003) use the Survey of Consumer Finances to investigate the relationship between a household's marginal tax rate and its likelihood of saving through a tax-deferred account (TDA). Higher marginal tax rates are correlated with greater use of these accounts, and with the likelihood of holding bonds in a TDA. This paper does not analyze asset location choices, however. In this paper, we also use data from several Surveys of Consumer Finances (SCFs) to analyze asset location decisions. The SCF data provide complete and disaggregate information on the portfolios held by a large sample of households. These data cover holdings across all financial intermediaries, which makes it possible to study the overall structure of the household portfolio, rather than just the structure of the components held at a single financial institution. We compute the number of households facing asset location decisions as well as the value of the assets held by households with such choices. We then explore asset location patterns and relate these patterns to household characteristics that affect the gains from tax-efficient asset location, particularly household marginal tax rates. The paper is divided into five sections. The first presents information on the number of households that have significant balances in both taxable and tax-deferred accounts. Section 2 explores how households allocate their assets in taxable accounts and TDAs. In the aggregate, equity investments make up more than two-thirds of tax-deferred financial assets and a similar proportion of taxable financial assets. The third section develops several simple classification rules to indicate whether or not households are making asset location decisions that are tax efficient. It also reports on the portfolio reallocation that would be needed to bring households in tax-inefficient positions to tax-efficient points. Section 4 presents cross-sectional regression and discrete choice evidence on the correlation between various household characteristics and asset location patterns. We investigate age, income, and net worth patterns in tax efficiency, as well as the effect of marginal tax rates. A brief conclusion suggests directions for future research.

This paper shows that asset location is an important financial issue for a substantial group of US households. More than 11 million households in 2001 had at least US$25,000 in both taxable and tax-deferred accounts, and at least 4.5 million had more than US$100,000 invested in each type of account. A broad range of studies both in academic journals and in outlets that are read by financial services professionals, such as Charron (1999), suggests that households can raise their after-tax retirement wealth by holding highly taxed assets in their tax-deferred account, and lightly taxed assets outside. Data from the Survey of Consumer Finances nevertheless suggest that roughly one third of households with both taxable and tax-deferred accounts are following asset location strategies that are tax inefficient. The cost of tax-inefficient behavior may be modest, however, for many households. For roughly three quarters of the households that appear to deviate from tax-efficient asset location strategies, moving less than US$10,000 in bonds or stocks would bring them to a tax-efficient allocation. The limited size of this reallocation places an upper bound on the foregone retirement wealth associated with current asset location decisions. It is also possible that the apparent tax inefficiency associated with the asset location decision is the outcome of a broader household optimization problem, in which liquidity needs or other factors may dictate asset holdings that deviate from tax-efficient configuration. The asset location choice that we consider is just one part of a broader web of financial choices that confront households. These choices include whether or not to contribute to a tax-deferred saving program, such as an IRA or a 401(k) plan, how much to contribute, how to allocate assets in this account conditional on contributing, whether to borrow and if so how to use home mortgage debt and other loan vehicles. While we have only considered one of these decisions, the choices may in fact be inter-related. The decision to hold equities in a tax-deferred retirement account, for example, may affect the decision about how much to borrow and what form such borrowing might take. Our findings suggest that non-tax considerations may play an important part in some of these household decisions, although it is difficult to measure and analyze these factors. Further work should explore the household-level determinants of financial decisions on each of the margins described above. Moving beyond reduced form models of the type we consider, and developing structural models as by Amromin (2002), is likely to be a particularly promising direction for investigation.