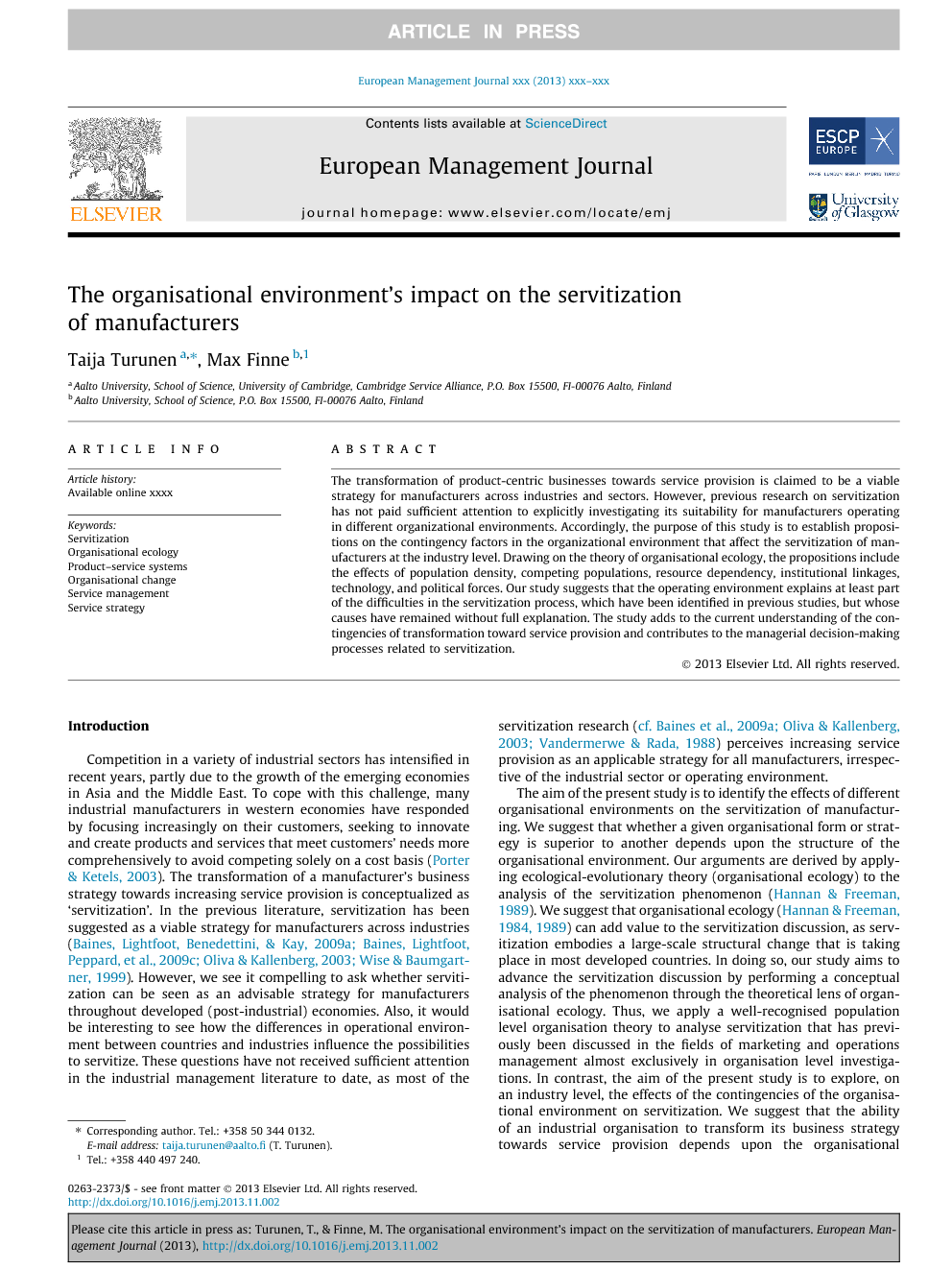 The transformation of product-centric businesses towards service provision is claimed to be a viable strategy for manufacturers across industries and sectors. However, previous research on servitization has not paid sufficient attention to explicitly investigating its suitability for manufacturers operating in different organizational environments. Accordingly, the purpose of this study is to establish propositions on the contingency factors in the organizational environment that affect the servitization of manufacturers at the industry level. Drawing on the theory of organisational ecology, the propositions include the effects of population density, competing populations, resource dependency, institutional linkages, technology, and political forces. Our study suggests that the operating environment explains at least part of the difficulties in the servitization process, which have been identified in previous studies, but whose causes have remained without full explanation. The study adds to the current understanding of the contingencies of transformation toward service provision and contributes to the managerial decision-making processes related to servitization.

Understanding manufacturers’ organisational environment is of the utmost importance for managers of industrial organisations to be able to decide on strategic actions and resource allocations, such as to what extent to broaden the offering from pure products towards service provision. A strategic move towards a service business should be based on a careful examination of the operating environment. Our propositions form a conceptual basis for this type of evaluation and help managers to identify the key environmental factors affecting servitization in the industries where their companies operate. One of the most important aspects in managerial decision-making is the global aspect of different functions. The suitability of manufacturing as well as service operations in certain areas needs to be evaluated on the basis of both legitimation and competitive aspects. We believe our conceptual analysis and the developed propositions can help managers improve their understanding of how different environmental conditions around the globe can affect the success of locating their manufacturing and service operations in response to changing the competitive landscape. Our propositions offer a conceptual background with which to analyse how different aspects of the organisational environment cause differences in servitization. In addition, our findings may change the way existing research on servitization is interpreted. Part of the difficulty in servitizing may be explained by environmental circumstances, rather than by mere challenges in managerial decision-making. For future research, the next logical step would be to test empirically the propositions developed here. A comparative analysis between different industries would provide the opportunity to define further how these propositions hold. Our analysis suggests that servitization differs mostly between manufacturers in different geographical industries and, thus, those facing different environmental requirements. Servitization paths between manufacturers within the same industry should differ less. Hence, we encourage comparative research on the servitization of manufacturers in different industries and geographical areas to test our propositions.