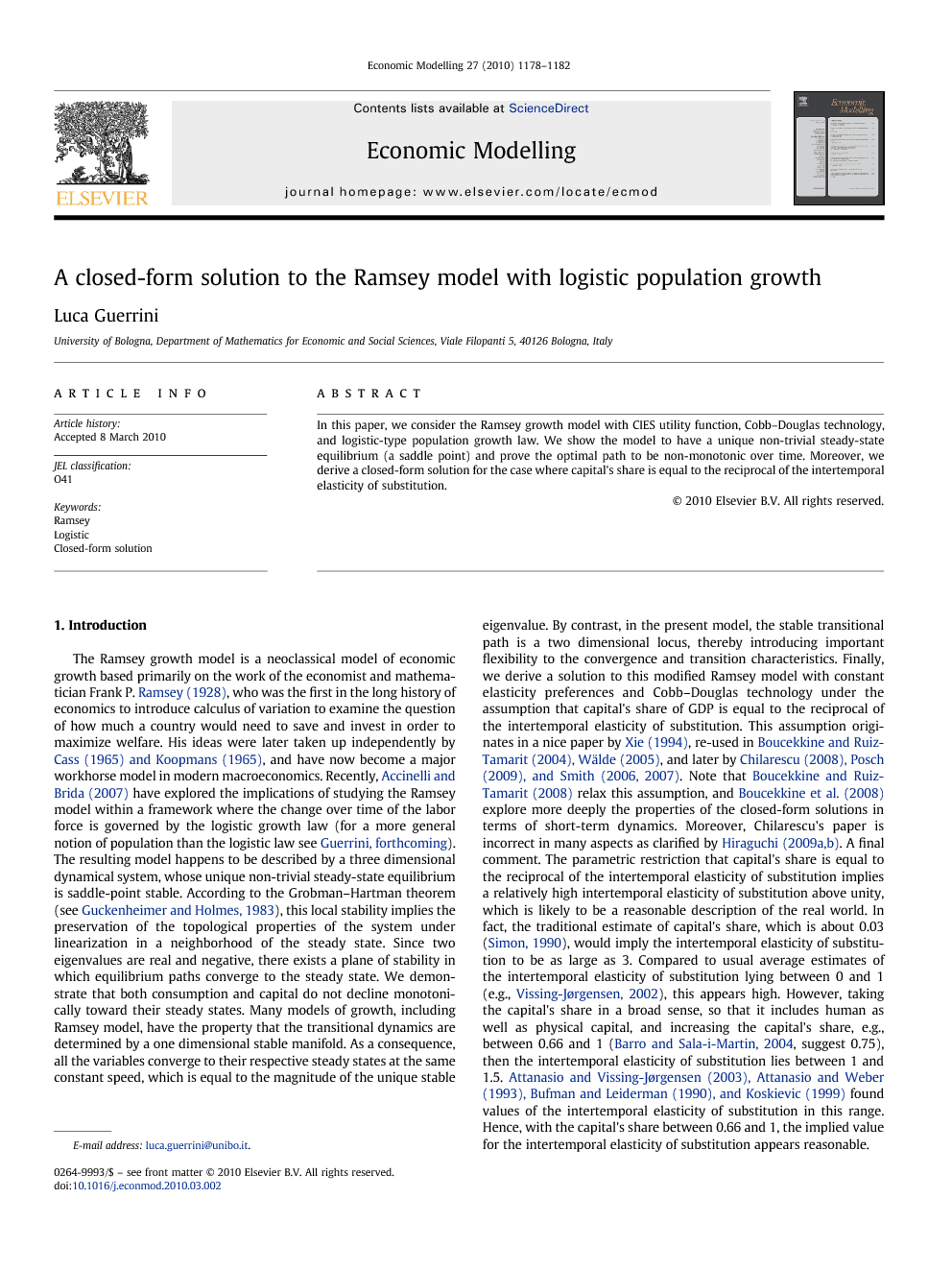 In this paper, we consider the Ramsey growth model with CIES utility function, Cobb–Douglas technology, and logistic-type population growth law. We show the model to have a unique non-trivial steady-state equilibrium (a saddle point) and prove the optimal path to be non-monotonic over time. Moreover, we derive a closed-form solution for the case where capital's share is equal to the reciprocal of the intertemporal elasticity of substitution.

The Ramsey growth model is a neoclassical model of economic growth based primarily on the work of the economist and mathematician Frank P. Ramsey (1928), who was the first in the long history of economics to introduce calculus of variation to examine the question of how much a country would need to save and invest in order to maximize welfare. His ideas were later taken up independently by Cass, 1965 and Koopmans, 1965, and have now become a major workhorse model in modern macroeconomics. Recently, Accinelli and Brida (2007) have explored the implications of studying the Ramsey model within a framework where the change over time of the labor force is governed by the logistic growth law (for a more general notion of population than the logistic law see Guerrini, forthcoming). The resulting model happens to be described by a three dimensional dynamical system, whose unique non-trivial steady-state equilibrium is saddle-point stable. According to the Grobman–Hartman theorem (see Guckenheimer and Holmes, 1983), this local stability implies the preservation of the topological properties of the system under linearization in a neighborhood of the steady state. Since two eigenvalues are real and negative, there exists a plane of stability in which equilibrium paths converge to the steady state. We demonstrate that both consumption and capital do not decline monotonically toward their steady states. Many models of growth, including Ramsey model, have the property that the transitional dynamics are determined by a one dimensional stable manifold. As a consequence, all the variables converge to their respective steady states at the same constant speed, which is equal to the magnitude of the unique stable eigenvalue. By contrast, in the present model, the stable transitional path is a two dimensional locus, thereby introducing important flexibility to the convergence and transition characteristics. Finally, we derive a solution to this modified Ramsey model with constant elasticity preferences and Cobb–Douglas technology under the assumption that capital's share of GDP is equal to the reciprocal of the intertemporal elasticity of substitution. This assumption originates in a nice paper by Xie (1994), re-used in Boucekkine and Ruiz-Tamarit, 2004 and Wälde, 2005, and later by Chilarescu, 2008, Posch, 2009, Smith, 2006 and Smith, 2007. Note that Boucekkine and Ruiz-Tamarit (2008) relax this assumption, and Boucekkine et al. (2008) explore more deeply the properties of the closed-form solutions in terms of short-term dynamics. Moreover, Chilarescu's paper is incorrect in many aspects as clarified by Hiraguchi, 2009a and Hiraguchi, 2009b. A final comment. The parametric restriction that capital's share is equal to the reciprocal of the intertemporal elasticity of substitution implies a relatively high intertemporal elasticity of substitution above unity, which is likely to be a reasonable description of the real world. In fact, the traditional estimate of capital's share, which is about 0.03 (Simon, 1990), would imply the intertemporal elasticity of substitution to be as large as 3. Compared to usual average estimates of the intertemporal elasticity of substitution lying between 0 and 1 (e.g., Vissing-Jørgensen, 2002), this appears high. However, taking the capital's share in a broad sense, so that it includes human as well as physical capital, and increasing the capital's share, e.g., between 0.66 and 1 (Barro and Sala-i-Martin, 2004, suggest 0.75), then the intertemporal elasticity of substitution lies between 1 and 1.5. Attanasio and Vissing-Jørgensen, 2003, Attanasio and Weber, 1993, Bufman and Leiderman, 1990 and Koskievic, 1999 found values of the intertemporal elasticity of substitution in this range. Hence, with the capital's share between 0.66 and 1, the implied value for the intertemporal elasticity of substitution appears reasonable.

In this paper, we provide a description of the dynamics of the Ramsey model with logistic population growth introduced by Accinelli and Brida (2007). Standard assumption in the Ramsey model is that population grows at a positive given rate, so leading to exponential growth, which is clearly unrealistic. To remove the prediction of unbounded population size in the very long run, Verhulst (1838) considered the hypothesis that any stable population would show a saturation level. In this alternative population model, known as logistic model, the population stock evolves according to an elongated S-curve. Recent forecasts (United Nations, 2000), having the world as unit of analysis, confirm that the annual growth rate of population is expected to fall gradually until 2100, and that world population will stabilize at a level of about eleven billion people by 2200. Thus, not only theoretically but also empirically, it seems reasonable to model population size as following a logistic process. In this kind of setup, we show that there exists a unique optimal path which asymptotically converges towards the unique steady-state equilibrium of the model. In contrast to standard Ramsey model, the equilibrium paths of capital and consumption are proved to be non-monotonic over time. Moreover, as the system approaches the stationary state, capital and consumption converge to their steady state values with a speed of convergence which is determined by the eigenvalue with the smaller absolute value. Finally, we provide analytical solutions to this modified Ramsey model, when capital's share is equal to the reciprocal of the intertemporal elasticity of substitution.