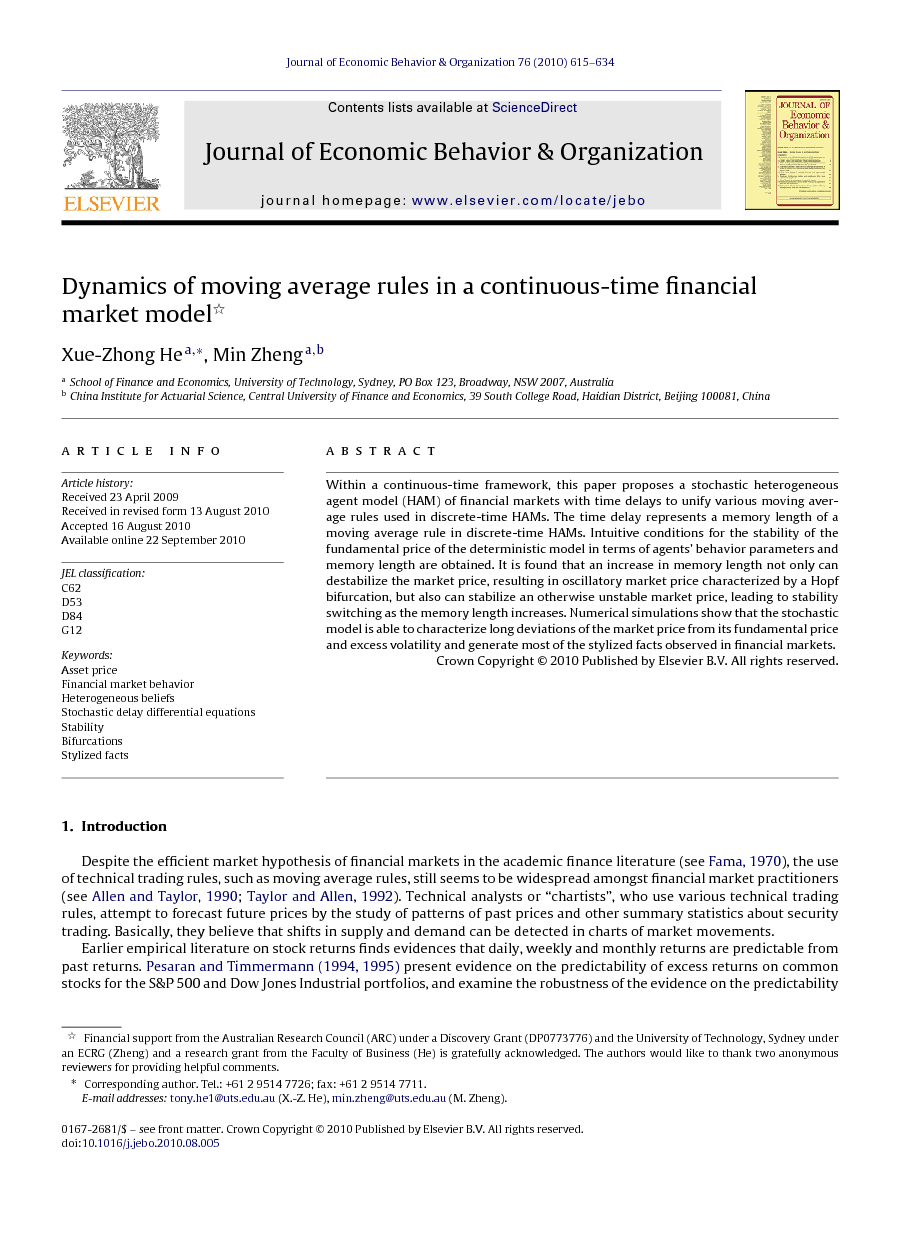 Within a continuous-time framework, this paper proposes a stochastic heterogeneous agent model (HAM) of financial markets with time delays to unify various moving average rules used in discrete-time HAMs. The time delay represents a memory length of a moving average rule in discrete-time HAMs. Intuitive conditions for the stability of the fundamental price of the deterministic model in terms of agents’ behavior parameters and memory length are obtained. It is found that an increase in memory length not only can destabilize the market price, resulting in oscillatory market price characterized by a Hopf bifurcation, but also can stabilize an otherwise unstable market price, leading to stability switching as the memory length increases. Numerical simulations show that the stochastic model is able to characterize long deviations of the market price from its fundamental price and excess volatility and generate most of the stylized facts observed in financial markets.

The continuous-time HAM with time delay proposed in this paper provides a unified treatment to the discrete-time HAMs involved expectations that are formed by using historical information, such as weighted MA rules. However, the correspondence between the behavior of high dimensional discrete-time models and infinite dimensional continuous-time models with delays such as (3.1) may be severely limited. In particular, the stability switching as the memory length increases is apparently little known for the current discrete-time HAM literature. It is clear from the present work and the HAM literature (see, for example, Chiarella et al., 2006a) that, when agents use lagged information such as price to form the expectation, an increase in the memory length can either stabilize or destabilize the system in general. The analysis presented in this paper shows that, under certain circumstance, such stabilizing and destabilizing effect can switch (possibly many times) as the memory length increases. Numerical simulations of the stochastic model show that the stability switching as the memory length increases in the deterministic model can generate long deviations of the market price from the fundamental price. It also demonstrates the potential of the stochastic model in generating most of the stylized facts observed in financial markets. In order to make the model parsimonious and focus on the memory length effect, we consider a very simple financial market with heterogeneous agents. It is of interest to extend the model in a number of directions. First, the demand functions of the heterogeneous agents in the paper are assumed based on agents’ behavior rather than on utility maximization in the standard finance theory. Justification and variation of the behavior demand functions using utility maximization are of interest. Second, the market clearing mechanism used in this paper is via a market maker who provides liquidity to the market. It is well known that (see, for example, Bradfield, 1979) the market maker acts not only as a liquidity provider but also as an active investor by managing the market maker inventory in order to maximize the profit (see, for example, Zhu et al., 2009). To incorporate the market maker inventory into the present framework and to examine the market impact of the time delay are of interest. In addition, the analysis of the stochastic model in the paper is based on some numerical simulations. Also, we only consider both the market and fundamental price processes without growth. A systematic study on the interaction of the nonlinearity of the model and different forms of the stochastic processes is desirable in order to understand the mechanism of generating the stylized facts. In future research it will be useful to understand those issues.